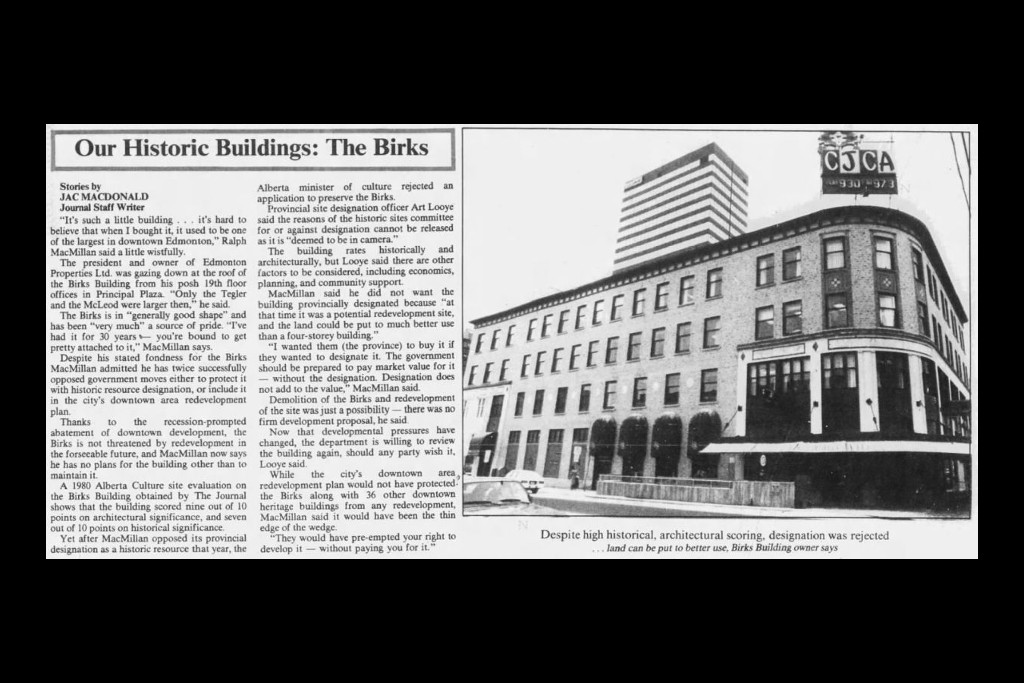 On this day in 1984, details were coming out about how close Edmonton came to losing the iconic Birks Building.

The way the building curves around the corner of Jasper Avenue and 104 Street has made it instantly recognizable for nearly a century. But its origins actually lie back east. Henry Birks began his jewelry business in Montreal in 1879. The following decades were successful for the company, and before long, it expanded to other cities across Canada.

Birks and Sons arrived in Edmonton in 1927 when they bought out the successful jewelry store run by D.A. Kirkland, dubbed "The Diamond Prince of Edmonton." As the Edmonton Journal article notes, the Birks company had a habit of moving into new cities by buying "the best store or the best real estate, or both."

The company hired Montreal architects Nobbs and Hyde to design the $350,000 facility in the same style as their Montreal shop and other stores across Canada. When the building opened in 1929, it was an event. More than 5,000 people came out for the grand opening.

The jewelry store took up much of the first floor, offering more than 200 feet of displays and counters. But just as exciting for residents were the other three floors of the building. At the time, Henry Birks and Sons had a policy of leasing the office space of their buildings specifically to medical professionals. They went as far as consulting with local doctors and dentists as to the design of the building, adding in extra features such as a compressed air system running through the building. That made the Birks Building the first in the city designed specifically for medical offices.

In 1934, the fourth floor of the Birks Building was leased to CJCA Radio, which had been Alberta's first radio station, broadcasting since 1922. The memorable CJCA "Flying Tiger" sign, with its moving tail and gigantic glasses, was added to the top of the building for the 40 years the station called it home.

The building changed hands several times over the latter half of the 20th century. Several attempts were made to designate the building as a historical structure, both by the city and the province. But they were often opposed by building owners such as Ralph MacMillan, who told the Journal in 1984 that he opposed historic designation because the land could be put to better use than a four-storey building and designation "does not add to the value."

Eventually, the Birks Building was added to the city's inventory of historic buildings. Despite the fact that Henry Birks and Sons expanded to many Canadian cities, Edmonton's Birks Building is one of the only two original stores still standing, along with the Montreal original.

While the Birks Building is currently protected, there are those warning that other Edmonton landmarks are in danger. Earlier this year, the city's historical board warned that more properties are being demolished than being protected and urged the city council to put more emphasis on preserving historic structures.