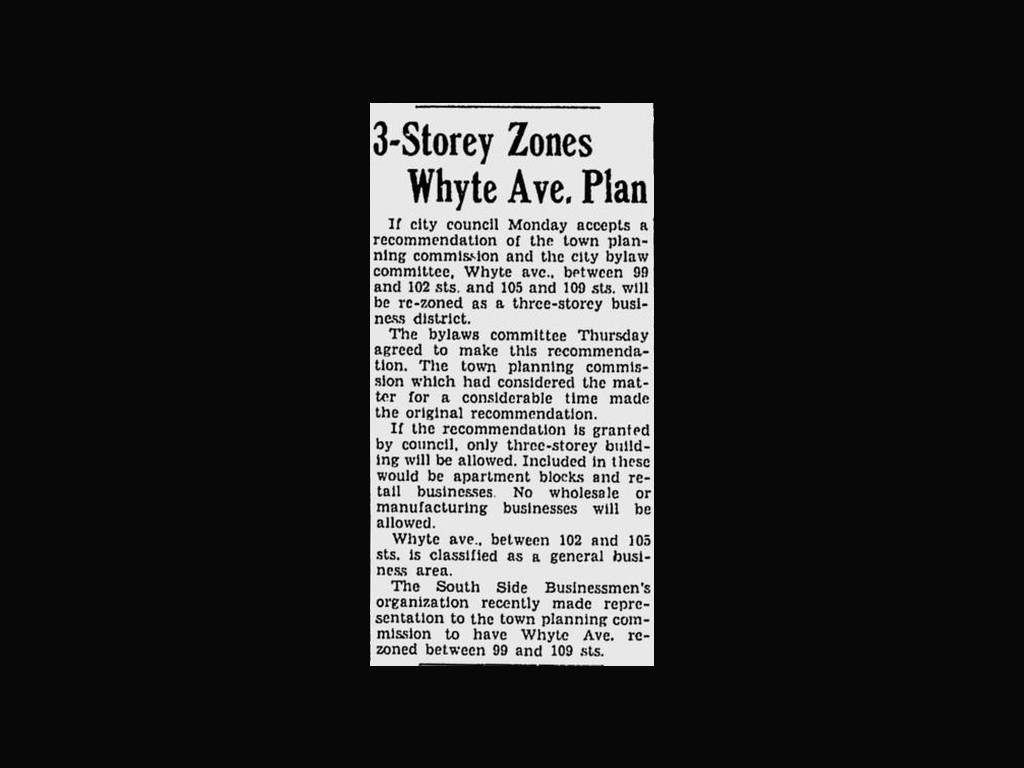 On this day in 1945, Edmonton's city council was considering a cap on the height of new buildings along Whyte Avenue.

The debate on how to protect the character of Old Strathcona has been going on for nearly as long as the neighbourhood has been a part of Edmonton.

In 1891, the Calgary and Edmonton Railway was established. Despite the name, the rail line didn't reach Edmonton, which was mostly contained north of the river at that time. Instead, the terminus sat on the south side of the North Saskatchewan River and served as the focal point of a new community. Over the next few decades, Strathcona grew from a tiny hamlet to a sibling city alongside Edmonton.

The design and economy of Strathcona were dominated by the railway. When the railroad graded two roads near its station, businesses began to spring up along the strip. Soon, the two streets — now Whyte Avenue and 104 Street — became the commercial and retail centre of the burgeoning town.

Most of the early buildings were made of wood. But in 1903, Strathcona passed new fire prevention laws that required new buildings to be made out of non-combustible material. That led to the two- or three-storey brick buildings that still define Whyte Avenue today. Then, in 1912, Edmonton and Strathcona merged into a single city.

The 1945 proposal to limit the height of new buildings on Whyte came during booming commercial construction in the area. There were fears among both Old Strathcona residents and city leaders that tall buildings could overshadow the architectural flavour of the street. The proposal would see new buildings restricted to three storeys in height with limits on wholesale and manufacturing businesses along a portion of the avenue. While support was strong, the measure doesn't appear to have passed.

The boom of the 1940s eventually gave way to a period of stagnation for Whyte Avenue. A whole section of the 1967 General Plan for Edmonton is dedicated to the revitalization of Whyte, which was marked by "dilapidated buildings, nonconforming land uses and vacant lots," it noted. Recommendations in the plan included drawing more department stores to the area, substantially increased parking, and more pedestrian malls.

In December 1998, the city adopted the Strathcona Area Redevelopment Plan, covering not only Whyte Avenue, but also much of the surrounding area. The intention was to preserve the neighbourhood's character while encouraging commercial development. Included in the plan were restrictions capping new buildings to a maximum of four storeys along much of Whyte Avenue.

Over the past 25 years, that plan has been changed, with amendments covering everything from preserving green space to encouraging active transportation. The height restrictions remain in effect. But that doesn't mean there aren't still disagreements over the future of Whyte's squat skyline. Over the years, several towers and rezoning efforts have been pitched and have faced vocal opposition. In 2018, the city started a new commercial land use plan for the area called planWhyte. Phase 1 of public engagement on the project continues this summer, with the second phase set to begin in 2023.