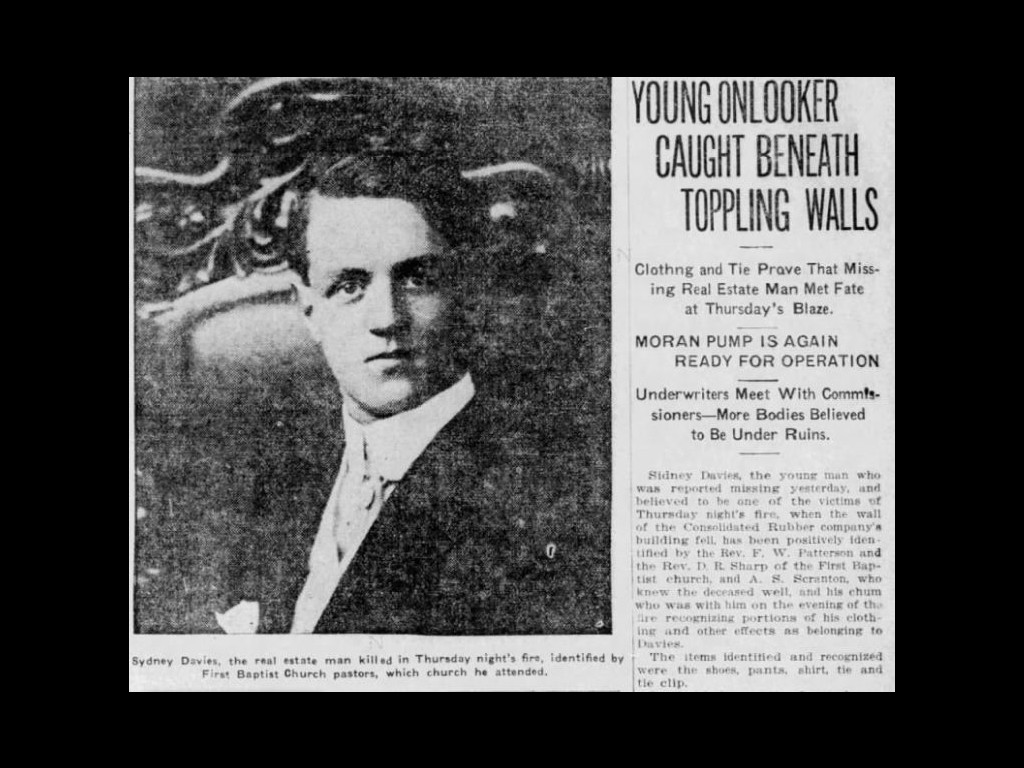 On this day in 1913, people were still searching for survivors after one of the city's worst fires.

Newspaper accounts don't mention the cause of the fire that destroyed the Lechambre Block, but it centred on two brick warehouses on 104 Street and 102 Avenue. One was the Brackman-Ker building, owned by a Vancouver milling company of the same name. The Canadian Consolidated Rubber Company owned the other.

However it started, the fire spread quickly and engulfed both buildings. The situation was dangerous enough, but neither the firefighters nor bystanders knew how much worse it would soon become. As fire crews attempt to fight back the blaze in the frigid weather, an explosion tore through the rubber warehouse.

Seven firefighters were on the ground floor at the time and were nearly trapped by debris. They fled blindly through the smoke, and all were able to escape through the rear of the building. One of the firefighters later told a newspaper that the building was "a big bomb, waiting for only for a tongue of flame to ignite the bottled up gases." It was speculated that chemicals stored in the basement of the building might have contributed to the blast.

One of the walls of the warehouse collapsed and fell onto a neighbouring rooming house. One body was found under the collapsed wall shortly after the fire was extinguished. Two others would eventually be discovered.

The fire came at an unfortunate time. The winter of 1913 was marked by dozens of fires, which stretched rescue workers thin. Moreover, on the night of the warehouse fire, one of the city's main firefighting tools — a Morgan water pump — was out of commission after breaking down during another fire the week before.

The damage was severe enough that both buildings had to be demolished. But the land didn't stay empty for long: the Canadian Consolidated Rubber Company finished construction of a new warehouse on the same site within a couple of months. The new five-storey brick building was designed and built by the same company behind the new Macdonald Hotel, and it was constructed with the site's grim history in mind, boasting what was then the latest in fire safety technology.

The rubber company operated out of the warehouse until 1935. It was home to other industrial companies over the decades until it was converted into residences. Now known as the Cobogo Lofts, it stands as one of the distinctive sights along 104 Street. In 2001, it was designated as a Municipal Historic Resource.

The Cobogo Lofts building is one of the oldest surviving examples of Edmonton's old warehouse district. Now converted into residential and commercial buildings, such buildings provide a link to the industrial history of downtown Edmonton, as will the proposed Warehouse Park, a greenspace planned for 2025.