The city will not provide funds to a volunteer group aiming to build a park connecting downtown Edmonton and Old Strathcona. The urban planning committee pointed to COVID-19-related financial struggles on Feb. 2 as the reason it could not give the High Level Line Society the $85,000 it was hoping to receive.

"We’re just not in a position right now to put dollars on the table,” said Mayor Don Iveson.

"This is a really exciting and compelling project that would really help Edmonton in terms of economic development, tourism, and activation of our downtown," said deputy city manager Stephanie McCabe.

Council endorsed the project in December 2019, and said it would consider providing the $85,000 to get it off the ground. A decision was supposed to be made on March 14, 2020, but council suspended meetings to focus on dealing with COVID-19 the day before.

Close to a year later, the committee agreed there isn't room in the budget.

"We're in worse shape financially than we were when we first discussed this," said Coun. Ben Henderson.

Despite their inability to give the project money, committee members were unanimous in wanting the project to move forward, and passed a motion directing the city's administration to continue working with the society. Administration will help with looking into other means of funding the project, and will provide council with updated reports in the future. 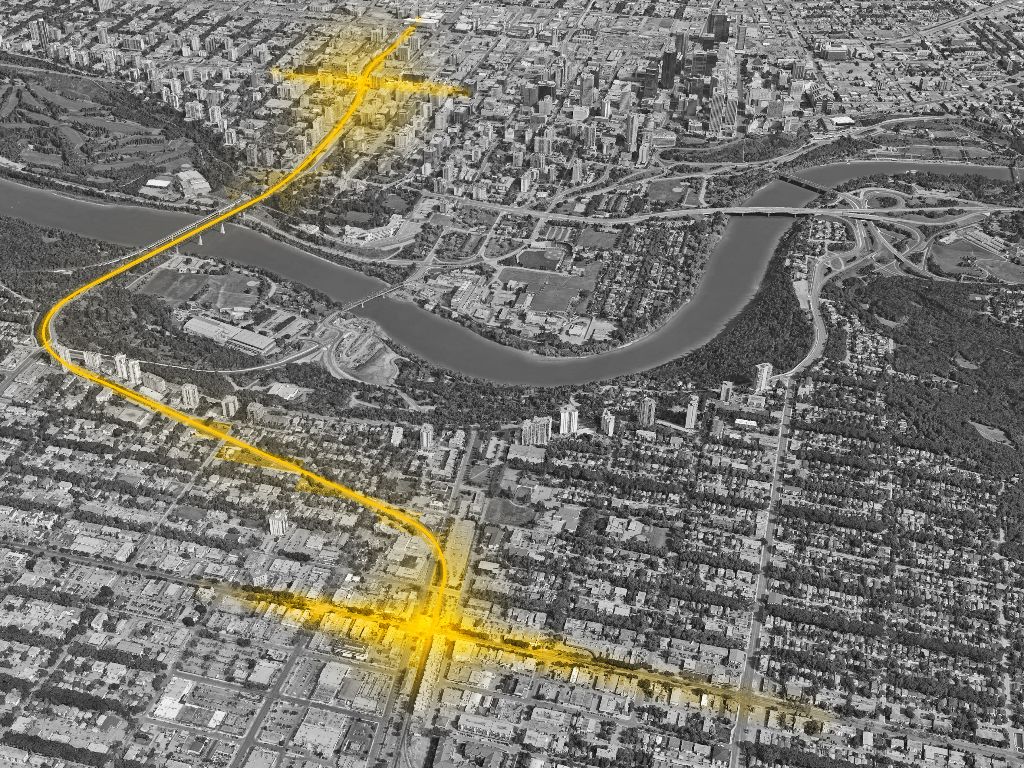 The project intends to connect the city by providing more pedestrian infrastructure between its major commercial areas. (Supplied by High Level Line Society)

“It breaks my heart a bit that this is the motion we have to put forward today, and not the one we had all dreamed of before current events hit us,” said Henderson. "I have every belief that this project is going to happen. I think it would be a colossal crime if we don’t take advantage of the volunteer imagination."

Coun. Bev Esslinger also praised the project for being in line "with so many … projects — the city plan, open spaces, active transportation — all working towards making a better city."

Gillian Thomson, chair of the High Level Line Society, said the group will now have to seek private donations to meet its goals. Although the committee's decision was not what she was hoping for, she said the motion to support the project will help the society, since it now has documented backing to show potential donors.

"Now it's a little more obvious that support for this project is fairly widespread across council, the committee, and the administration," she said. "It's good to have something in writing."

The urban planning committee also discussed possibly giving the non-profit organization status as a registered charity, which would also make it easier to secure donations. However, Thomson explained that this was "out of the question."

"It doesn't make sense for the work that we're doing," she said, since the donations would not be going towards a physical project at this point, instead helping the group continue with planning and research. Registered charities in Alberta are required to show exactly where their money is going, which is difficult without something tangible to point to.

In spite of funding woes, Thomson is confident the High Level Line will come to fruition eventually.

"It's captured the attention and support of so many people because the idea really makes a lot of sense, and now the city has come on board," she said. "It's encouraging, but disappointing that progress will be slower than we had hoped."

The urban planning committee will review an updated report on the High Level Line in one year.