When Erika Thorkelson started reminiscing about her early days as a freelancer in Edmonton, she couldn't find any way to access her first stories penned for the defunct weekly, SEE Magazine. When the magazine's final issue hit the recycling bin in 2011, its website and online presence were shut down, too.

"I wanted to be able to look at whole issues of SEE Magazine and reconnect with the culture of the time," Thorkelson said, noting that she found a few places with hard copies, but the pandemic made it nearly impossible to access them. "I needed digital copies. No one had digital records, but everyone I spoke to said they would love to have them."

After consulting with University of Alberta librarian Sarah Severson, the idea to create a digital archive of SEE's 913 issues took shape. The U of A library has a scanner that can capture bound print pages in high quality, full colour renderings, and make those renderings searchable — the same process was recently completed to preserve the full 1910-2016 print archive of The Gateway. 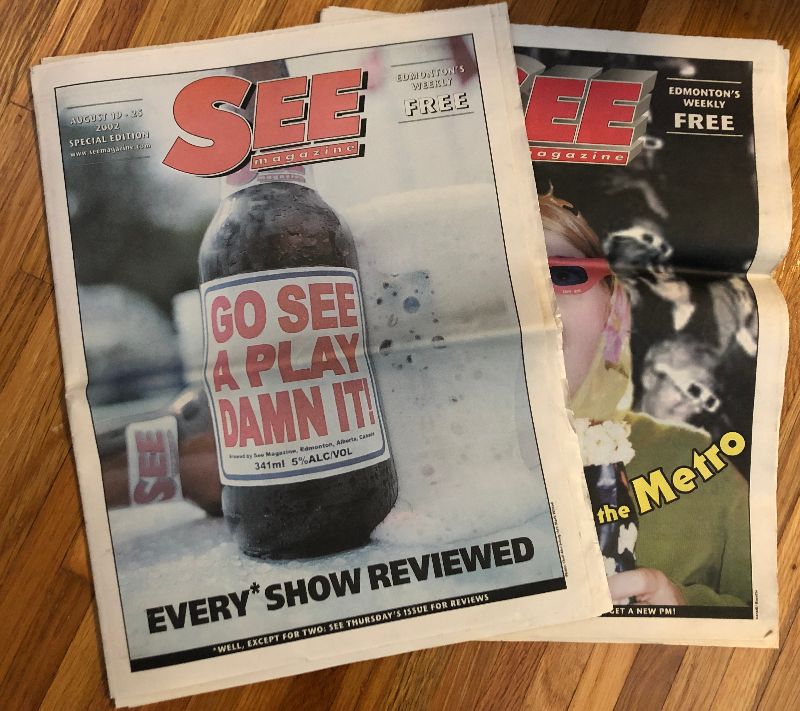 Two covers of SEE Magazine from 2002, including one of its Fringe Review issues. (Erika Thorkelson)

The final roadblock was budget cuts to post-secondary schools in Alberta, which meant that the U of A needed funding to proceed. So, Thorkelson recruited fellow former SEE writer Mari Sasano to help kick start a crowdfunding process.

"Having these records digitized will give access to a whole period of the cultural history of Edmonton that was simply inaccessible before," Thorkelson said. "It will preserve the work of so many of us who are often left out of the mythology of this era in community journalism."

For Edmontonians, SEE's online records will offer a treasure trove of thousands of stories about the city’s artists and arts scene from 1992 to 2011. Folks interested in supporting can donate at any level, including sponsoring a single issue for $5.50.

"There will be a wealth of material about dance, visual art, and theatre — art forms that have always struggled to get coverage in mainstream outlets but were the bread and butter of free weeklies. The Fringe Festival issues of the magazine alone are full of historical detail that’s not accessible anywhere else," Thorkelson said.

Note from your curator: Your correspondent was once a SEE contributor and co-produced a COPA award-winning podcast about the warring history of SEE and Vue, but she has no involvement with this crowd-funding campaign. She remains concerned and somewhat perturbed that her earliest writing will now be preserved and accessible to all audiences.