In tandem with the arrival of the funniest day of the year comes Play the Fool's online incarnation: a film festival comprised of (very short) shorts from around the world, focusing on clowning in its myriad forms.

"I've always been a huge fan of Charlie Chaplin and Buster Keaton," said Shreela Chakrabartty, the festival's film program coordinator, who curated twelve films with submissions from Edmonton and as far-flung as Rio de Janeiro, Tehran, and Paris. "I grew up with films that had the label of clown, mostly classic vaudeville clowning, and that made me want to deep dive into what this clowning thing is all about. Like, what's a clown film today? It was an opportunity to look into something humourous and fun and light."

All films are two minutes or under, making it one of the shortest short film festivals around. Though Edmontonians may be more familiar with the pathos of Mump and Smoot and other theatrical clowns, she noted that the tropes of creepy clowns are far more prevalent — something she hopes the 24-minute total lineup in Play the Fool might allay.

"There's a whole other side to clown that doesn't involve fear and creepiness," she added. And it's not circus, either. 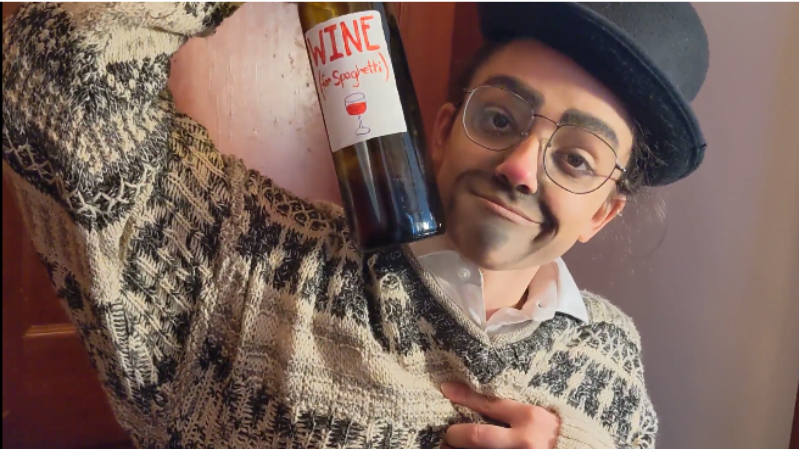 Spaghettiman is one of twelve two-minute shorts featured at the Play The Fool International Short Film Festival. (Dayna Hoffman)

Pranking aside, a clown's aspiration is often to help navigate hang-ups, be those physical, emotional, or social. And for a form as audience-dependent as clowning, pivoting to digital seems like quite the feat.

Spectators in the festival format are being offered a space to laugh and learn about the broad world of clowning without the oft-dreaded threat of audience participation, though Chakrabartty hopes that audiences will engage with the festival on social media throughout its four-day stream — and that they may be inclined to donate in appreciation, too.

"Some of the work is fantastic. I was really impressed by the quality and the way that people have transformed their art onto these platforms," Chakrabartty said. "The creativity is just unparalleled."

Also available online throughout the long weekend is the Chinook Series, which is three mini-festivals in one. Taking programs from the Expanse Movement Arts Festival, SOUND OFF Deaf Theatre Festival, and Fringe Theatre Adventures, Chinook's offerings include streams of live and on-demand performances, artist workshops, and in-conversation salons. All Chinook tickets are pay what you can.