A report presented to council by city administration on April 6 estimates the city will bring in $20 million less than the previously budgeted estimates over the next two years from traffic safety automated enforcement. To close the gap, the report recommends reducing funding for programs in the Safe Mobility Strategy, which are funded by the traffic safety automated enforcement reserve, by $2.6 million.

The report said the projected loss of revenue is primarily due to a decision by the provincial government to reduce the share of traffic enforcement revenues that go to municipal governments.

Council voted unanimously to reduce funding for two traffic safety programs, and voted 12-1 to increase funding for one, with Coun. Mike Nickel voting against. 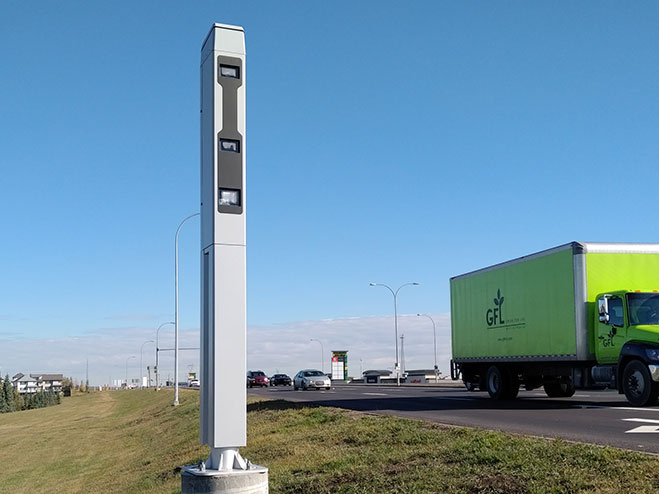 Edmonton uses the money collected from photo radar tickets to fund many of its traffic safety initiatives. (City of Edmonton)

The school safety program, which funds improvements to pedestrian crossing infrastructure around schools with elementary students and the construction of drop-off and pickup areas, will lose $1 million. Jessica Lamarre, the city's director of traffic safety, said this change reflects changes in the estimated costs of the program, and will not affect the safety improvements themselves.

The project to lower residential speed limits to 40km/h from 50km/h will lose $1.3 million. Most of the original budget was allocated for new speed limit signs, and the report said the city will reduce the number of signs, rather than change them, to make up the difference.

Despite the cuts, the city also approved some funding — $700,000 for community activation programs, which includes Vision Zero Street Labs, an initiative to help communities design their own temporary traffic safety measures. The report said Street Labs are "low-cost, low-risk ways for citizens and community groups to work with the city to trial safer street designs for all."

"We can start rolling the program out — hopefully within the next week or so," Lamarre said in response to the funding approval.