A proposed regional transportation plan suggests there should be more cycling and pedestrian infrastructure in small urban and rural areas, and between municipalities.

The Integrated Regional Transportation Master Plan (IRTMP) was developed by a task force set up by the Edmonton Metropolitan Region Board (EMRB) in 2019, along with a working group of outside consultants. On May 20, the task force met to discuss the final draft, which includes four objectives for transportation systems as the region's population grows.

The second objective is to "encourage a mode shift to transit, high occupancy vehicles, and active transportation modes as viable and attractive alternatives to private automobile travel," which will make the region more environmentally sustainable and increase the region's connectivity, according to the document. The main ways to reach this goal are to increase public investments in transit infrastructure, and disincentivize car travel by increasing car-related costs, such as parking.

Justin Laurie, a councillor for the Town of Stony Plain and member of the IRTMP task force, told Taproot that while conversations around active transit tend to focus on dense urban centres like Edmonton, the concept is growing in popularity in smaller municipalities like Stony Plain.

"Whether it's walking, cycling, or e-bikes — and those are becoming very popular — people are looking for options to utilize those modes of transportation," he said.

However, investments into active transit may be harder to sell to residents of small urban areas, since cars are still much more popular overall. The IRTMP notes that the City of Edmonton had more than twice the number of people who regularly commute by bicycle compared to the region as a whole, and substantially more who commute by walking, according to City of Edmonton survey results from 2015.

Laurie is confident that investing in the infrastructure first will encourage active transit down the line.

"Options aren't used until they're available," he said, adding that a commuter bus service introduced between Spruce Grove and Edmonton a few years ago originally saw extremely low-ridership, but is now regularly at full capacity. 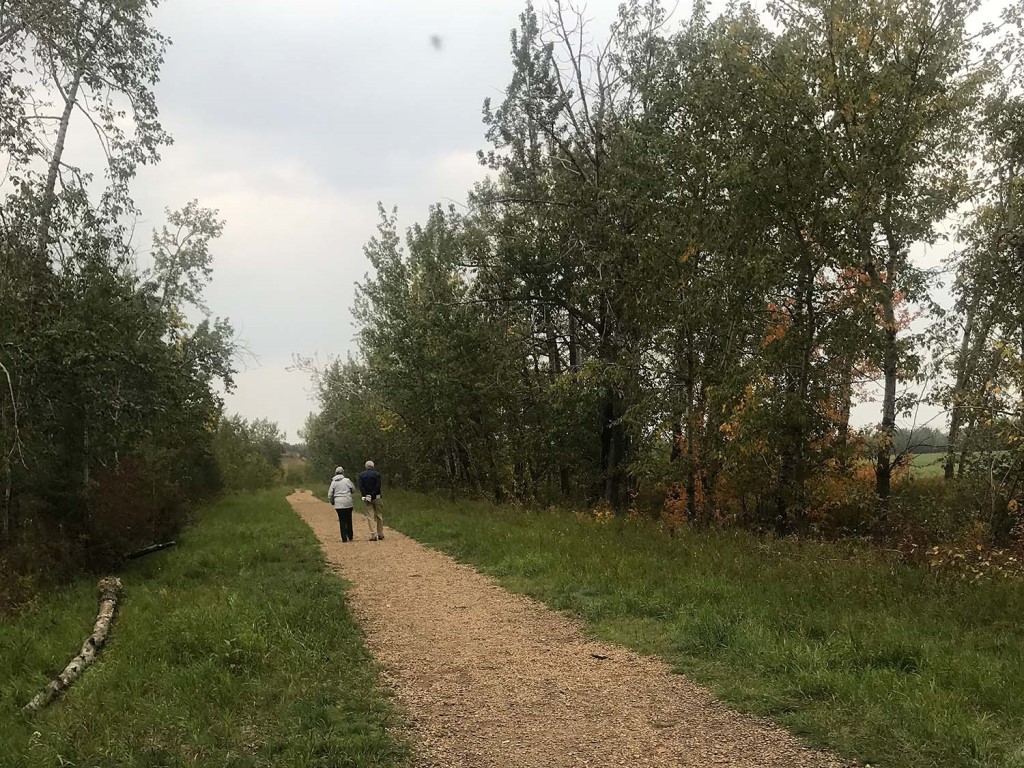 Strathcona County's regional trail completed in September 2020 connects to existing paths near Fort Saskatchewan and Edmonton, and to The Great Trail. (Courtesy of River Valley Alliance)

"For a long time, cars have been the only viable option in some areas," he said, "but when you set up the infrastructure (for active commutes), you induce demand for it — you show that it's not just for cities."

The IRTMP does not just include plans for more bike lanes in smaller towns. One proposal is an expansion of the regional trail network, which would encourage active transit between municipalities.

Some local governments have already started investing in intermunicipal active transit in recent years. Strathcona County completed a 22-kilometre section of trails connected to the regional network last September, while Stony Plain and Spruce Grove are currently in the process of building a trail connecting the two communities. The IRTMP includes a number of proposals for trails connecting Edmonton to Devon, Leduc, and Fort Saskatchewan and reaching as far as the southern border of Leduc County.

In the May 20 task force meeting, Laurie proposed adding even more new trails to the plan, to connect Edmonton to Acheson, and St. Albert to Morinville.

He told Taproot the regional trails are important for people commuting or using them for leisure, since they allow people to avoid major roadways.

"People don't want to be walking or riding their bicycle down the shoulder of a highway where you have vehicles going 100 kilometres an hour. It's just something that makes people very uneasy," he said.

The task force voted unanimously to endorse the IRTMP, with a few amendments primarily related to Laurie's proposed regional trails and small formatting changes to make the document more clear. The EMRB will vote on the amended plan on June 10.

Laurie is hopeful the plan will be approved, and said that active transit is going to become increasingly necessary as the region grows.

"We've seen the shift start to happen, and that shift is going further and further," he said.

"We have to be forward-thinking and consider ... what future generations are going to want to see in these municipalities."

Correction: An earlier version of this article quoted Justin Laurie as saying a recently introduced bus service in Stony Plain has grown in ridership, when in fact he was referring to a commuter service between Spruce Grove and Edmonton introduced several years ago.