Alberta's plan to lift COVID-19 restrictions on businesses by late June or early July is seen as key to reviving Edmonton's struggling tourism sector and bringing workers back to areas like the city's hard-hit downtown.

Daniel St. Pierre of Explore Edmonton said the city's $2 billion a year tourism industry lost up to 80% of its revenue during the pandemic.

"The impacts have been significant. Tourism as an industry was the first hit, it will likely end up being the hardest hit and it will take the longest to recover," he told CTV Edmonton, while welcoming a provincial announcement to allow businesses to keep tourism levies for an additional three months.

The Alberta government also plans to lift the work-from-home order when Stage 2 begins, which is currently projected for mid-June. The Edmonton Chamber of Commerce applauded that decision as giving a boost to businesses in commercial and industrial centres, and the downtown core. "Many businesses operate on thin margins and depend heavily on foot traffic, so they are especially vulnerable to the ripple effects of lockdowns and changing guidelines," CEO Janet Riopel said in a news release.

Even if the province's "open for summer" rollout proceeds as planned, some business owners will likely not be back in operation for months. Kristoffer Harvey, the owner of The Chvrch of John, said getting a live performance venue like his up and running is a massive undertaking. "As venues, we've been chatting together more about ... September ... but again, a big puzzle piece is touring artists, bands, even if they're Canadian, them being able to come in," he told City News. 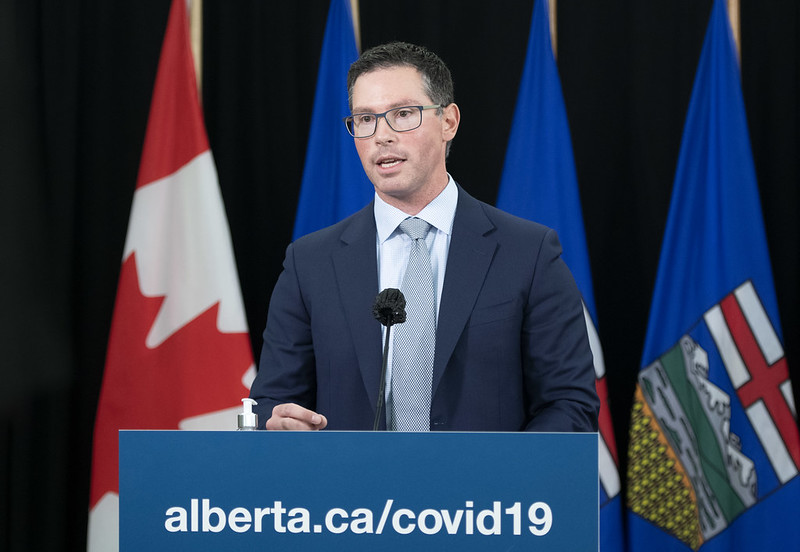 Minister Doug Schweitzer said the government is extending the application deadline for its program to support small and medium-sized businesses impacted by public health orders. (Government of Alberta/Flickr)

Justine Martinson, founder of Lipstick Empire LaserSpa in Edmonton, is welcoming news that personal services businesses can reopen June 1 after a cumulative six months of pandemic closures. "It's been a roller-coaster," she told CBC Edmonton, adding there is always a fear the province will order them closed again.

Jobs, Economy, and Innovation Minister Doug Schweitzer said during the May 26 announcement of Alberta's reopening strategy that the government is extending the application deadline for its program to support small and medium-sized businesses impacted by public health orders. "(We have) an immense amount of gratitude to the small businesses across Alberta that have made those sacrifices for all of us," he said.

Premier Jason Kenney launched an open for summer tracker on May 27 showing the percentage of Albertans who have received at least one dose of vaccine, while urging Albertans to get their shot to help reopen the province.