The provincial government has said it will remove its mandatory mask requirement on July 1, leaving municipalities to decide whether to lift local rules that require face coverings in indoor public spaces.

Edmonton city council voted on a bylaw amendment to suspend its local mask requirements per a recommendation from administration on June 22. Though the amendment passed two readings by a narrow margin, unanimous consent was required to give the bylaw a third reading, which Coun. Aaron Paquette voted against.

A motion from Coun. Jon Dziadyk to hold a special city council meeting on June 25 to vote on a third reading passed 10-2. If the bylaw amendment passes, local mask requirements will be lifted on July 1, in conjunction with the province.

The provincial mask requirements, which were instituted last December, are being lifted as part of Stage 3 of the province's reopening plan, which is scheduled for two weeks after 70% of Albertans aged 12 and up receive at least one dose of COVID-19 vaccine. On June 18, Premier Jason Kenney said this target was hit in time for Canada Day.

Last summer and fall, many Edmonton-area municipalities instituted temporary face coverings bylaws in absence of provincial rules. At the time, Edmonton Mayor Don Iveson expressed dissatisfaction that the province was merely recommending the use of masks in public spaces, and said "mandating face coverings is an important step to protecting Edmontonians."

Many municipalities decided to coordinate their mask requirements to prevent people from travelling between them to avoid the rules.

Now as COVID-19 case numbers in the province continue to fall and vaccination rates continue to rise, local leaders are considering following the province's lead and removing their face coverings bylaws, if they haven't already expired. 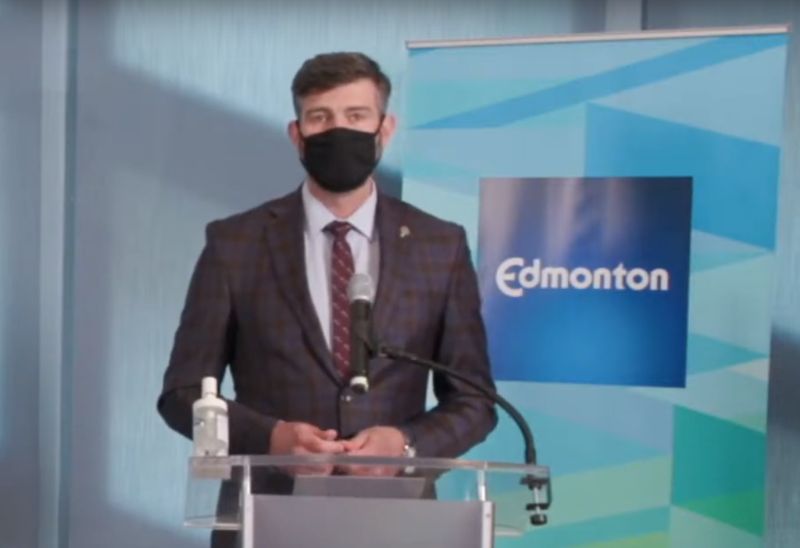 Edmonton Mayor Don Iveson wearing a mask during a June 8 update on COVID-19 in the city. (Courtesy of the City of Edmonton)

Here is what the region's leaders and experts have said on the subject so far: