City council has unanimously approved $21.6 million for the construction of nearly 140 supportive housing units, but a lack of provincial funding for operating costs could reduce the capacity for support.

Council decided at its meeting on Aug. 16 to add the funding to the operating budget of the city's social development branch, with $14.9 million originating from the federal government's Rapid Housing Initiative (RHI) that was committed in March 2021. The remaining $6.7 million comes from the city's housing reserve.

The funding will facilitate the conversion of two hotels into supportive housing, one with 53 units and the other with 85 units. Supportive housing includes supports meant to maintain residents' independence such as the presence of medical clinics, professional development opportunities, financial coaching, and others services dependent on tenant needs. The location of the two hotels is being kept confidential until they are purchased by third-party housing providers and construction can begin.

The funding, however, does not cover the cost to maintain supportive housing operations. Instead, administration said it is continuing discussions about operational funding commitments with the "appropriate ministries" in the provincial government.

"What we're seeing is the federal government and cities stepping up to increase investment, trying to get us over the finish line, and really focusing on supportive housing," Christel Kjenner, the city's director of affordable housing, told Taproot.

"What we're just hoping for is an increase in investment from the province, as well, to match the renewed leadership from cities."

"There certainly are benefits to investing in (supportive housing), and a lot of it is a sustainable solution. From that perspective, I'm optimistic that eventually, all parties will be aligned."

A supportive housing project in Inglewood is one of a number of projects underway in Edmonton. (City of Edmonton)

Without provincial support on operating costs, Kjenner told Taproot there are a number of strategies to maintain the housing, all of which are "suboptimal."

One option would involve defunding a project managed by Homeward Trust, and the other would change the units from supportive to affordable housing. Doing so would eliminate the presence of on-site support within units, which Kjenner said helps residents immediate access to health and social assistance.

"It would still be beneficial to the community and there would definitely be people that would benefit," Kjenner said. "But, it would mean that the housing is not fulfilling the highest needs."

Mayor Don Iveson expressed concern regarding what he called the provincial government's "particular issue of leaving federal aid on the table."

"I hope ... we're in a position where we're not turned down for more federal aid, more units, more jobs, that could be created because of further stubbornness from the Government of Alberta on this clearly evidence based intervention."

"We should be proud that we've been tenacious on this," Iveson added. "I think how we treat our most vulnerable is one of the most important measures of any society." 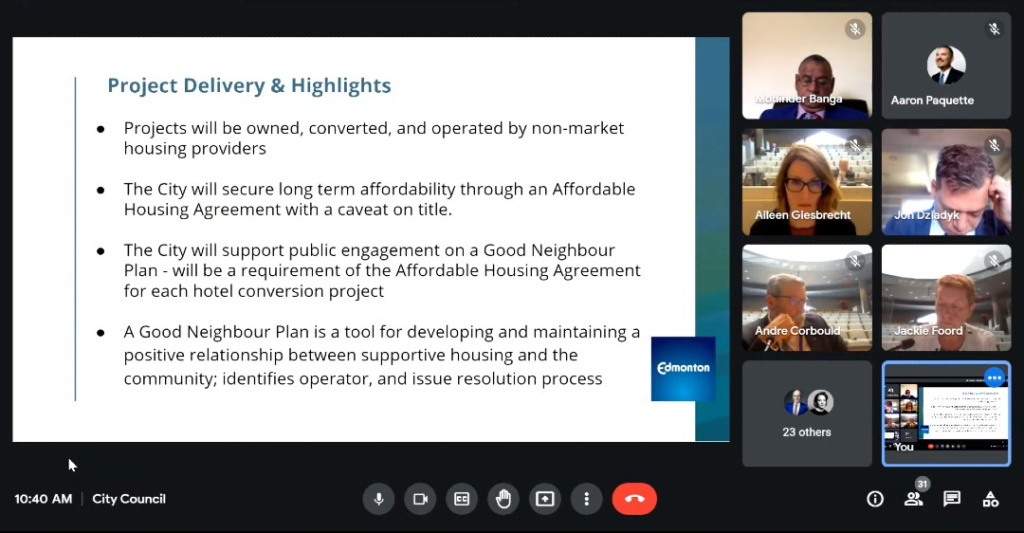 Many councillors spoke about the importance of supportive housing in Edmonton at the Aug. 16 meeting. (City of Edmonton/YouTube)

"I am surprised to have so many conversations, especially over the last little while, from people who don't realize the province is not actually part of the major contributors to housing. This is in fact within their jurisdiction," he said.

"I hope (the provincial government will) come to the table on it, and if not, then maybe they need to re-evaluate whether this is something they want to have jurisdiction of. And if they don't, maybe it's time to turn it over to those that can."

Council also approved an updated Housing Investment Plan to seek another $34.5 million in federal funding. This request for secondary RHI funding, committed by the federal government in July, would allow for the construction of another 222 units of supportive housing. The city would contribute $7.3 million to fund the $41.8 million conversions of an additional two hotels.

The city must submit its application to Canada's Mortgage and Housing Corporation (CHMC) by the end of August, with a response expected by the end of the year.