The City Market Downtown is leaving 104th Street this summer, and will be relocated to a permanent, year-round location to the east.

Market vendors were told about the departure from 104th at a meeting on March 9 hosted by the market’s board. The meeting was held in the Great Western Garment (GWG) Building, a heritage building located on 97th Street and 103rd Avenue. At the meeting, vendors were provided a document with details of the market’s new multiday indoor concept, which includes space for over 100 permanent indoor vendors and a food hall on the second floor.

A rendering of what a market based at the GWG Building might look like, provided by the Edmonton Downtown Farmers' Market Association.

“Every Saturday and Sunday, the Farmers’ Market will have over 100 vendors selling product on the ground and second levels,” the document reads. “The ground level will feature overhead doors which will be open on pleasant days to create the outdoor feeling of fresh air and natural light. … The second level will feature a 230 seat Food Fair offering year-round tastes of Edmonton’s fare through a choice of a dozen kitchens. A second floor outdoor deck, covered with sustainable solar panels, will provide seating for over 80 people.”

Plans for the building’s exterior include a “Container City” of shipping containers adorned by murals. The document also states that 103rd Avenue will become a pedestrian street closed to traffic during market hours, and that there are 1,000 parking stalls adjacent to the building. 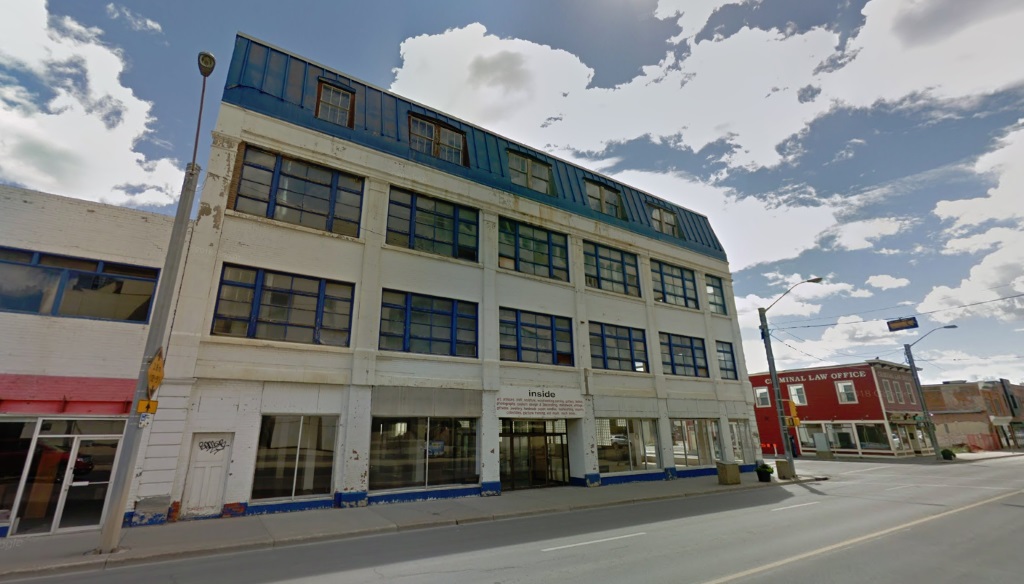 Gene Dub owns the GWG building through Five Oaks Inc., his real estate development and property management company. The Five Oaks website states that the property “consists of a 60,000 square foot 4-storey building which served as a department store that is being converted into a farmer’s [sic] market.”

Dub said on March 11 that he was not ready to comment on the redevelopment, but the City has since confirmed that it will be leasing the building from Five Oaks, and will in turn lease the building to the City Market.

"We can confirm that after searching for nearly 10 years, we've found a suitable new, permanent year-round location," said Sarb Dhaliwal, chair of the Edmonton Downtown Farmers' Market Association (EDFMA) which organizes the City Market Downtown, in a statement emailed on March 13. "While 104 Street has been our home for nearly fifteen years, and we've cherished the memories we've made there, we always knew we would one day need to move on to a more permanent location."

The statement said the EDFMA was "in the process of finalizing details of an agreement." A few hours later, it released the document that was shared with vendors, and it indicated that the new home for the market is the former GWG Building. 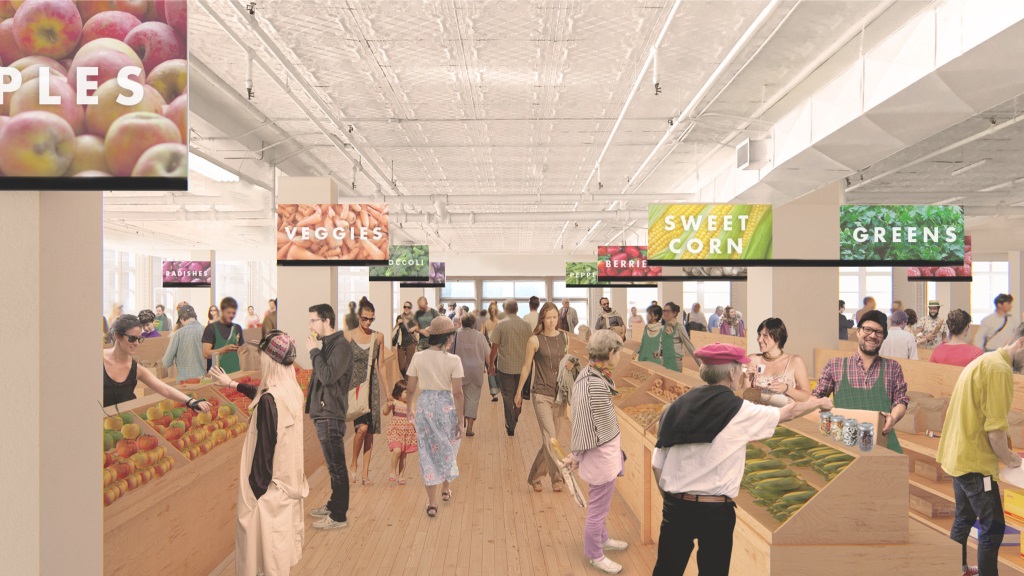 A rendering of a farmers' market inside the GWG Building provided by the Edmonton Downtown Farmers' Market Association.

There has been some uncertainty around whether the market could stay on 104th Street, given the ongoing LRT construction on 102nd Avenue and the proposed new Mackenzie Tower where the Blue Plate Diner is currently located.

The City of Edmonton confirmed the market was moving off of 104th Street, but did not at first indicate when or to where. "The termination of the licence for the current occupation of 104 Street was issued on December 31, 2018 due to upcoming construction disruptions," spokesperson Amber Medynski said in an email. "As the City Market is a major attraction Downtown, we've been working closely with them to secure a unique and exciting new space, one that will meet their needs, now and well into the future."

When the Mackenzie Tower was made public last summer, City Market spokesperson Dan Young said the market had not been consulted on the project.

Edmonton currently lacks a multiday indoor market. Mother’s Market on 109th Street was the first to operate in the city when it opened in 2014, but it closed abruptly a year later. The Old Strathcona Farmers’ Market has operated since 1983, but is only open on Saturdays.

A few other markets are in the works. Bountiful Markets just announced their intention to open a permanent indoor market on Edmonton’s south side in June. On March 4, City Council provided $600,000 in funding to The Public, a food business incubator and production facility with a public market, retail and event space, and 13 shared commercial kitchens on 107th Street and 106th Avenue.

The City Market has moved a few times throughout its history. The original market opened in 1903 as the Rice Street Market at Market Square, now the site of the Stanley A. Milner library. The market relocated to 97th Street in the 1960s due to the library’s construction. In 2004, the market moved outdoors to 104th Street and was one of the first tenants involved in the revitalization of that area. In 2011, the City Market became a year-round market by moving to City Hall during the winter months. 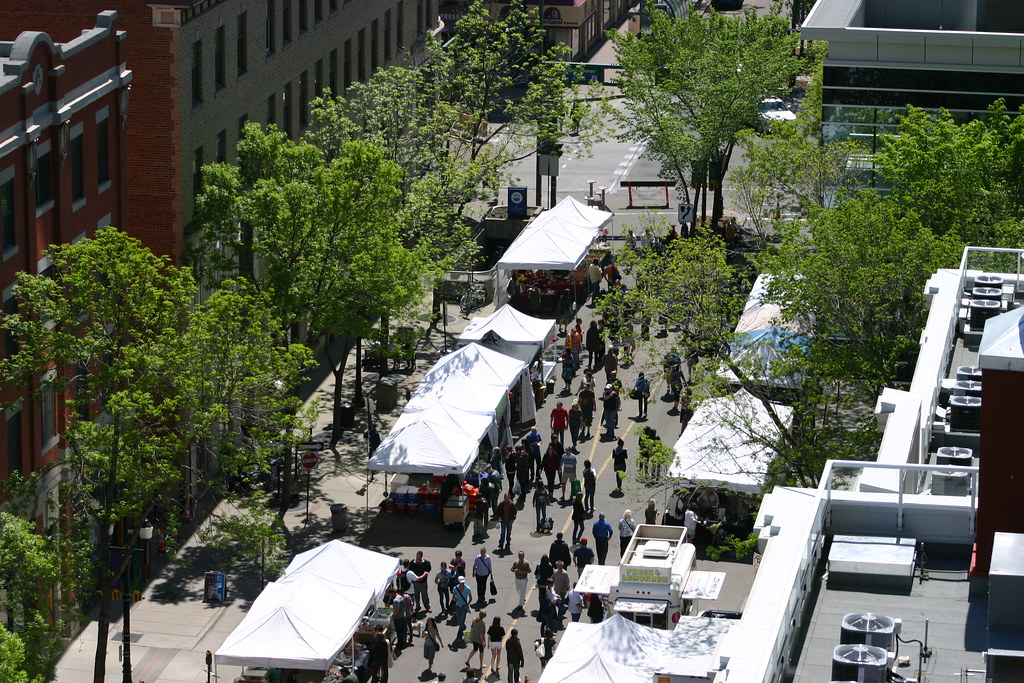 The market’s 104th Street location will undoubtedly be missed by visitors and vendors alike, especially as the identity of that street continues to evolve. When rumours of the move surfaced on Twitter on March 11, some expressed sadness at the thought of the market moving.

The market will need to work hard to bring the same crowds to the new location – Edmonton Made reports that the market attracts an estimated 18,000 people during its summers on 104th Street. The Boyle Street area is much quieter, though that area also just saw the opening of the Royal Alberta Museum’s new location.

“My staff are ecstatic because then we don’t need to pack and unpack or worry about the weather,” said one of the market vendors, who wished to remain anonymous. “I think it’s a great location. The neighbourhood might not be what people want, but it’s a destination. And it has free parking.”

Update (12-March): Comments from a City of Edmonton spokeperson have been added.

Update (13-March): A statement and renderings from the Edmonton Downtown Farmers' Market Association have been added.

Update (22-March): Additional comments from a City of Edmonton spokesperson have been added.

Update (22-March): Confirmation that the City Market is moving to 97th Street has been added.

This story will be updated further as warranted.