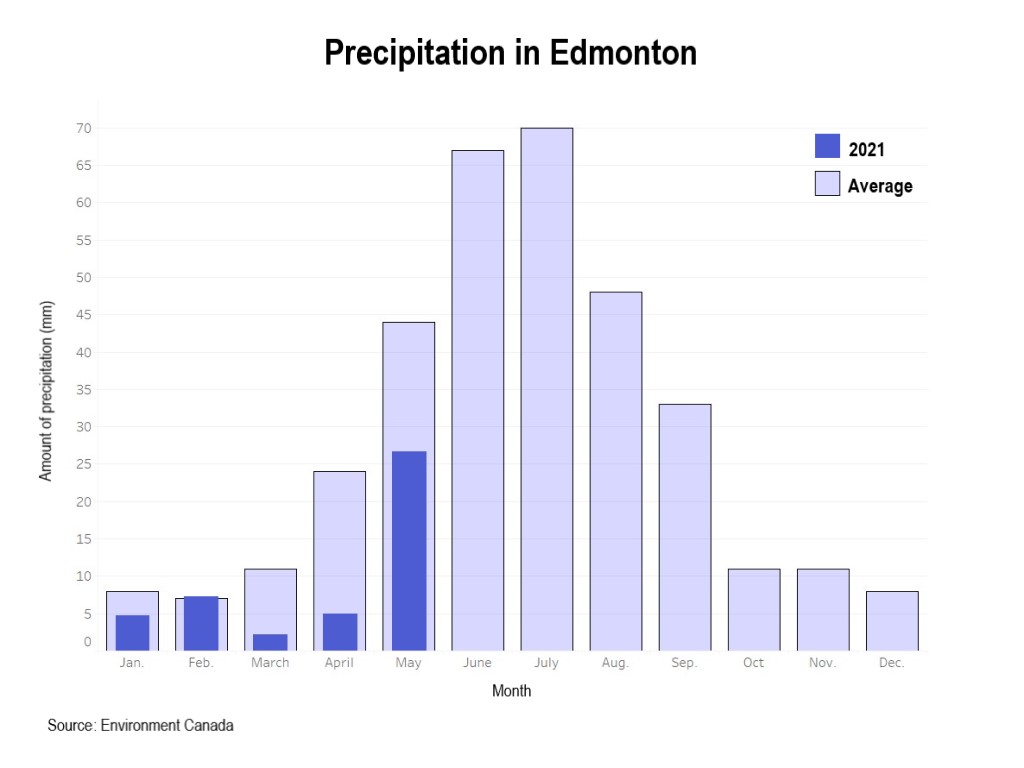 Most of the Edmonton region is subject to fire advisories or restrictions, as experts say a very dry spring has left the area susceptible to wildfires.

"We're seeing extreme conditions with a lot of the grass, the finer fuels, the small shrubs, things like this. They haven't got a lot of moisture in them," Parkland County fire chief Brian Cornforth told Global News.

This chart shows how much precipitation Edmonton received so far this year, compared to monthly averages calculated using data compiled by Environment Canada from the Edmonton Blatchford weather station.

In March, the start of Alberta's wildfire season, Edmonton received only a fraction of its average precipitation. April's numbers were similarly low, with only 5 millimeters compared to an average of 24 millimeters.

As a result of dry conditions across the region, Edmonton, Leduc, Leduc County, Sturgeon County, and Bon Accord have instituted fire restrictions, which means campfires are prohibited on public lands, and the municipalities will not issue new permits for backyard fire pits. Beaumont, Devon, and Fort Saskatchewan have issued fire advisories, which are intended to inform residents about the wildfire danger but don't come with any rules or restrictions.

Parkland County temporarily banned all outdoor fires in mid-April and a wildfire subsequently spread across the county, leading to an evacuation order being issued May 7. The order was lifted May 8, as the wildfire slowed down "with help from some much-needed overnight precipitation," said an update from Parkland County. The county does not currently have a fire restriction or advisory in place.

In a turn of events, the rainfall last weekend has left May on track to surpass its average amount. As of May 10, Edmonton had received 26.9 millimeters, more than half of the monthly average of 44 millimeters.