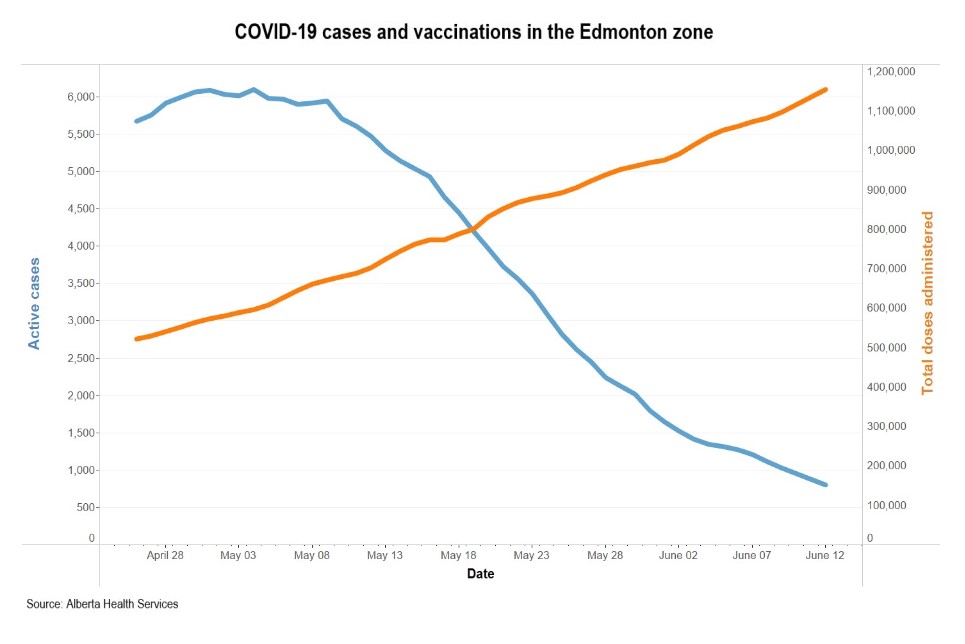 Since spiking in early May, COVID-19 cases have been declining in the Edmonton zone as more people get vaccinated.

Although there are plenty of factors that could lead to the decline in active cases, such as the provincial government reintroducing a ban on dining in and other restrictions on May 4, a recent report from the National Advisory Committee on Immunization notes there is evidence that COVID-19 vaccines do reduce transmission of the virus. However, the report also notes that the pool of evidence is too small to be conclusive. Another report from an Alberta Health Services (AHS) scientific advisory group also notes limited evidence of reduced transmission among people who have been vaccinated.

This chart demonstrates the correlation between the number of vaccine doses administered and the number of active cases in the Edmonton zone, using AHS data compiled by the City of Edmonton. The city began compiling vaccination data for each zone on April 26, coinciding with the start of a friendly competition between the mayors of Calgary and Edmonton to see which city's residents would get immunized the fastest.

On April 26, the Edmonton zone had 5,672 active cases. Residents of the zone had received 521,631 doses of the vaccine, including both first and second doses. As of June 12, the latest day of data available, residents had received 1.15 million doses, and there were only 800 active cases.

Vaccination rates also impact Alberta's public health restrictions, since the provincial government has tied the stages of its reopening plan to the percentage of the province that has received at least one dose of the vaccine. As of June 12, 66.7% of the Edmonton zone had received one dose, leaving trailing behind the province as a whole, which is at 68.7%.

Two weeks after 70% of the province has received at least one dose, Stage 3 of the reopening plan will take effect, which will see the majority of public health restrictions lifted.