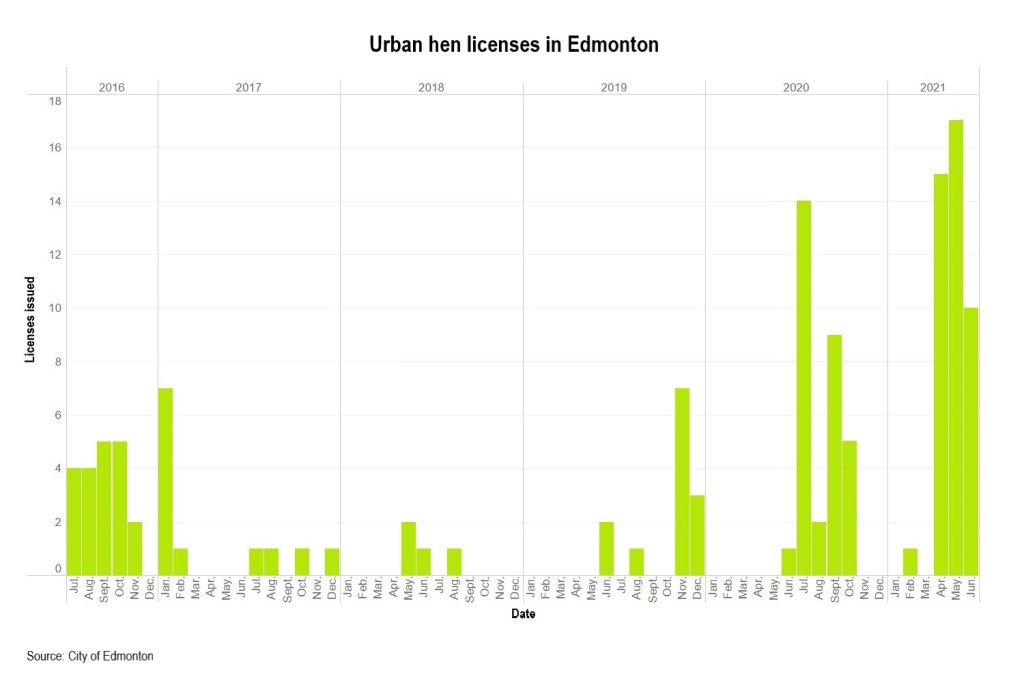 Since the start of 2020, the number of urban hen keeping licenses handed out by the City of Edmonton has almost tripled.

The city's urban hens program allows residents to build backyard coops to raise and keep chickens for meat or eggs, or as pets. Since the program started in 2015, the city has issued 125 licenses — 74 of them after the COVID-19 pandemic began.

This chart shows the number of licenses issued each month, using City of Edmonton data. The data starts in 2016, when the city decided to extend a one-year pilot, and raise the cap on total licenses issued per year from 19 to 50.

Urban chickens saw a bump in popularity in the spring of 2019, just after the cap on licenses was lifted, opening up the program to anyone who applied. However, people spending more time at home over the course of the pandemic has appeared to fuel an interest in self-sufficient, home-grown food systems more generally, including hens.

"We don't track specifically why people are requesting licenses to raise hens within the city, so we cannot confirm that the COVID-19 pandemic has had an impact," Jim Stang, a spokesperson for the City of Edmonton told Taproot. "But anecdotal evidence would indicate things such as urban gardening, urban agriculture, baking and other activities of this nature have experienced an increase during the pandemic."

Seed sellers and researchers in the city have also noted a rising trend in backyard agriculture, both as a relaxing hobby and a way to combat food insecurity, which has been increasing over the course of the pandemic as well.

"Municipal governments have begun to recognize the enormous opportunity provided by a more thoughtful consideration of food and its relationship to local community development," says the strategy.