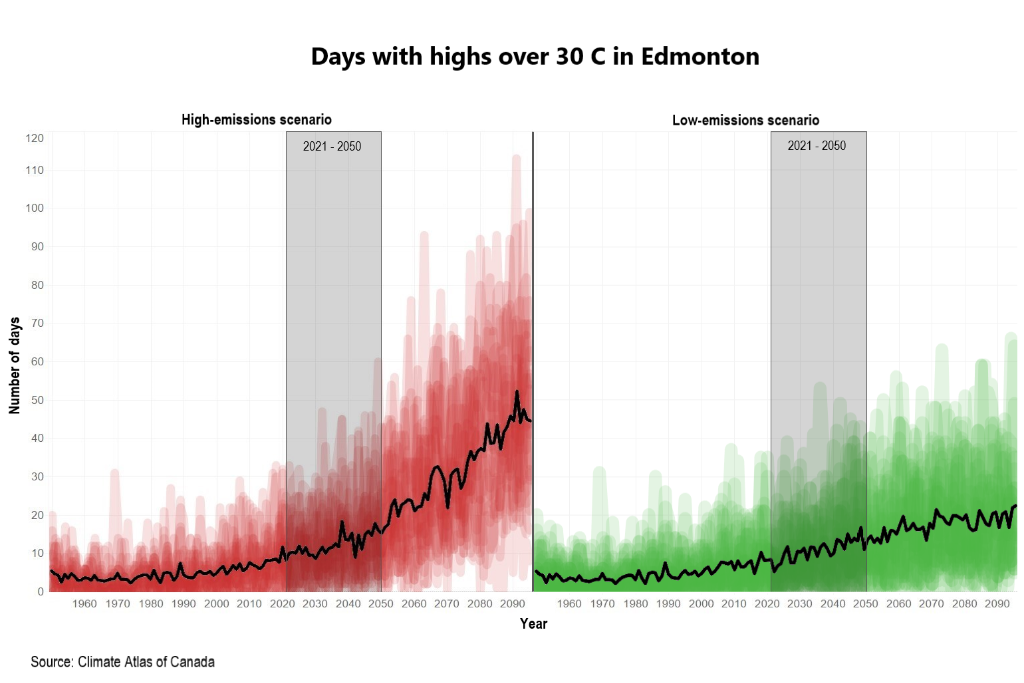 Last week, Edmonton experienced a record-setting heatwave where temperatures hovered consistently between 30-40 C. In the years to come, similar heatwaves are likely to become much more common.

The consecutive days with highs of over 29 C prompted Environment Canada to issue a heat warning, and the City of Edmonton to activate its extreme weather response, designed to keep the city's vulnerable populations safer by opening up public facilities to anyone needing a break from the outdoors.

This graph projects the number of days Edmonton may see temperatures over 30 C each year, using data compiled by the Climate Atlas of Canada. The red and green lines represent projections of 25 different climate models, while the black lines represent the average.

The high-emissions and low-emissions scenarios are based on predictions outlined by the Intergovernmental Panel on Climate Change (IPCC), called representative concentration pathways (RCPs). The high-emissions scenario, RCP 8.5, is a projection of the trend in greenhouse gas emissions between 1986 and 2005, and is closest to the path the world is currently on. This would result in an average global temperature increase of up to 5.9 C by 2100.

In this scenario, the number of extremely hot days in Edmonton would more than double between now and 2050, from seven to 15, and would rise to about 22 by 2095, the latest year projected in the Climate Atlas's data.

The low-emissions scenario, RCP 4.5, assumes emissions mitigation policies, an expansion of renewable energy, and reducing carbon-intensive land use like certain forms of agriculture. This scenario would result in a global temperature increase of between 1.5 C and 2 C.

Even in the low-emissions scenario, the number of extremely hot days in Edmonton would still increase to 13 by 2050.

Both still represent more greenhouse gases emissions than the City of Edmonton is aiming for. The Community Energy Transition Strategy and Action Plan city council approved this spring outlines how the city can align with a global average temperature increase of 1.5 C, or RCP 1.9.

This scenario requires the city to be carbon-neutral by 2050.