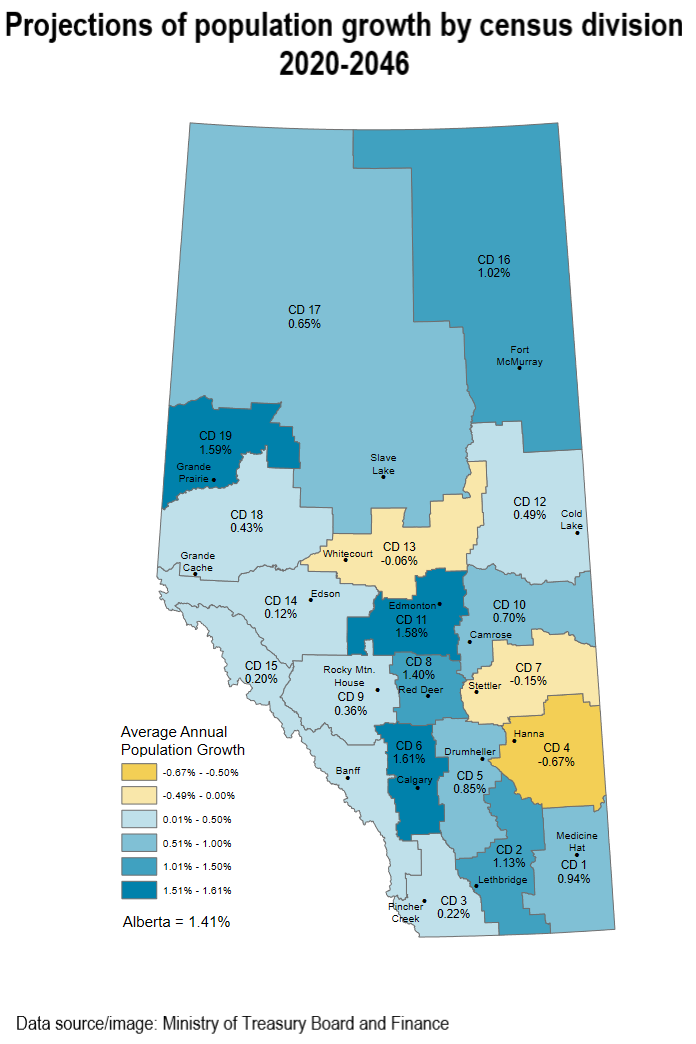 The provincial government is projecting the Edmonton area will be one of the fastest-growing regions in the province between now and 2046.

Data published by the Ministry of Treasury Board and Finance earlier this month projected population growth in each of the province's census divisions for 2021-2046, in three different growth scenarios. According to the ministry, the projections are calculated using current trends in mortality, migration, and fertility.

In the "medium growth" scenario, the population of Census Division No. 11, which includes the Edmonton Metropolitan Region as well as portions of Wetaskiwin County and Brazeau County, will grow from 1.53 million people in 2021 to 2.27 million in 2046.

Local officials have made similar predictions about Edmonton-area growth. The Edmonton Metropolitan Region Board (EMRB) predicted the region will grow to between 1.96 million and 2.24 million by 2044 in its growth plan published in 2017, while the City of Edmonton's City Plan predicts the city alone will reach a population of two million by 2040, outpacing other projections.

The EMRB's plan includes strategies for how the region's municipalities can collectively manage this growth. One of the plan's primary goals is to achieve compact growth mainly inside already built-up urban areas, using policies that encourage density, and promote high occupancy regional transit options like buses.

In a report accompanying the data, the provincial government also said the relatively high growth reflects an increase in the trend towards urbanization across the province. Three of the areas with the highest growth are around Calgary, Red Deer, and Edmonton — collectively known as the Edmonton-Calgary corridor — which is home to around 77% of Alberta's population despite covering only 6% of the land. Meanwhile, the areas with declining populations and those with the slowest growth are predominantly rural, such as Census Division No. 4, which contains just 0.21% of the population, and covers around 3.23% of the land.