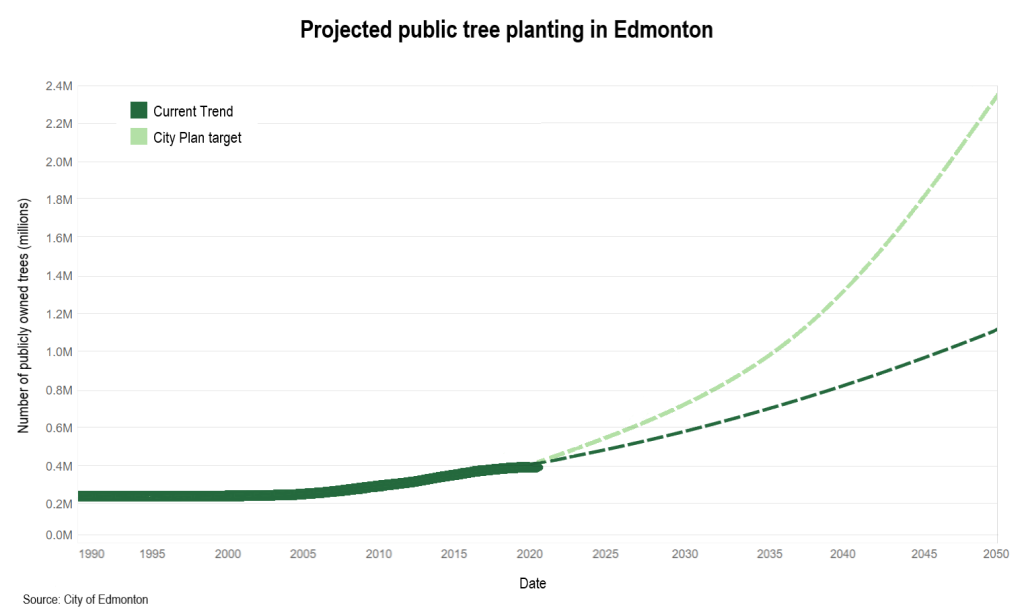 Edmonton's City Plan includes a goal of planting two million trees on public land between 2020 and 2050. This will require the City of Edmonton to up its annual tree planting average over the past decade by approximately 650%.

This chart shows Edmonton's inventory of publicly owned trees since 1990, the earliest year available in the City of Edmonton's data, as well as two projections showing how many trees the city will have in 2050 if current planting trends continue, and how many it will need to plant to reach its goal.

While the City Plan said Edmonton's total tree population is around 12.8 million, roughly 395,000 of those are publicly owned, meaning if the city reaches its goal, there will be more than five times the number of trees in parks, along boulevards, and in other public locations. It would also mean the city would have to plant an average of 67,000 trees per year, which it plans on doing through the recently created Urban Tree Canopy Expansion project.

While the city is not currently on track to meet its goal, the Urban Tree Canopy Expansion project only began selecting locations in May, and will not actually begin accelerating the amount of tree planting until next year.

If the City of Edmonton does manage to ramp up its tree planting, it may also have to contend with an encroaching pest. Emerald ash borers, which kill most ash trees they come into contact with, are spreading west through Canada, and were confirmed to have made it as far as Winnipeg in 2017.

Part of the reason for the tree planting goal is to help the City of Edmonton meet the emissions targets laid out in the Community Energy Transition and Action Plan. The total inventory of trees, both public and private, removed an estimated 531 tonnes of carbon dioxide from the atmosphere in 2009, the City Plan estimated, while the Energy Transition Strategy said the two million added trees will have a "moderate" effect on the city's overall emissions.

For more on trees in Edmonton, listen to Episode 139 of Speaking Municipally, which features an interview with Shrubscriber founder Dustin Bajer.