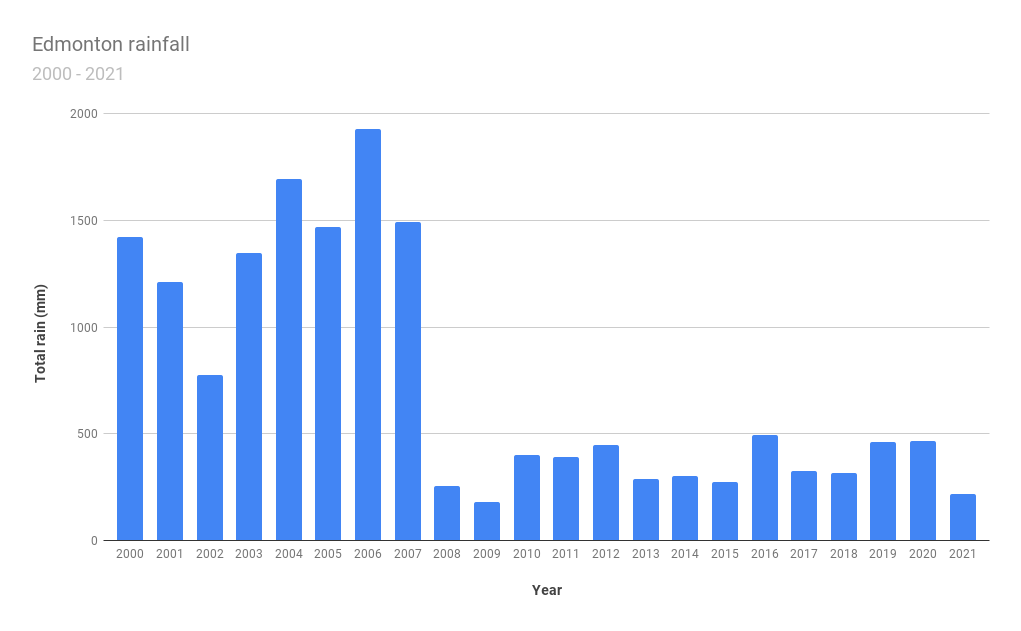 It's the end of a very dry summer in Edmonton, and while 2021 was particularly parched, it's the latest of a decade-long trend that has seen less rainfall in the city, according to data from Environment Canada.

While Edmontonians got a bit of a break from the current dry spell with some cold and wet weather last week, 2021 has seen very little rainfall overall. As of Sept. 3, the city recorded just under 220 mm of rain at weather stations around the area. That's far less than Edmonton's long-term average rainfall.

However, this year isn't a wild outlier. Since 2008, the capital region has seen a striking lack of rain compared to the early 2000s, with recent years being among the driest in Edmonton's history.

That lack of rain can have serious consequences. The dry decade means groundwater wells are running low, as there isn't enough rain to replenish them. As well, the severe lack of moisture puts a lot of stress on the health of the city's trees. In the area surrounding the city, the dry conditions can cause millions of dollars in damage to the agricultural sector and make Alberta's wildfire season even more dangerous.

And it doesn't look like that trend will change anytime soon. While individual years might see more rainfall, it is likely that Edmonton, as well as the rest of the prairies, will see more drought in the coming decades. Climate change has been blamed as a factor in some of the recent droughts in Alberta and the situation will likely worsen as the planet's temperature rises.

The City of Edmonton has identified drought as one of the main concerns it faces due to climate change, going as far as to make recommendations to help Edmontonians prepare for drier years ahead.