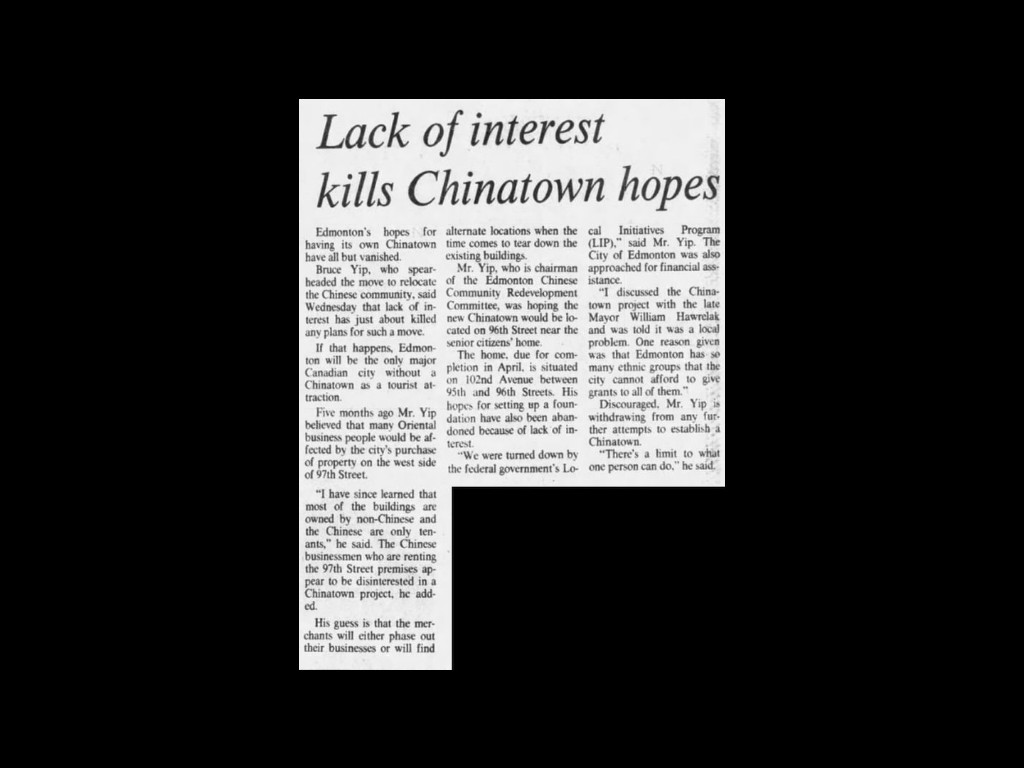 On this day in 1977, supporters of a plan to revitalize Edmonton's Chinatown district were on the verge of giving up.

For years, business and community leaders had pushed for the city to establish an official Chinatown in the core. Chinese business leaders at the time were calling for a four-block area to act as a cultural centre for Chinese residents as well as a possible tourist draw, but they found little support from those in power.

Edmonton's first Chinese resident, Chung Kee, arrived in 1890 to found a laundry business in the growing town — an event considered noteworthy enough to warrant a mention in the Edmonton Bulletin. At the time, the federal government had instituted a head tax to restrict Chinese immigration to Canada. So while Edmonton's population began to skyrocket in the early 1900s, the Chinese community grew at a trickle. By 1910, there were around 150 Chinese residents in a city of 25,000. And nearly all of them were single men working as labourers.

The community was centred around a few small blocks along Jasper and 97th Street and provided the city's small Chinese population with housing, social centres, and community resources. It continued to grow until 1923. No longer content with just limiting Chinese immigration, the Canadian government banned it altogether. The Great Depression followed, hitting the labourers who made up much of Chinatown's population particularly hard. (For a fictional imagining of that time, listen to Episode 4 of the Hardboiled podcast.) The area stagnated, and those with the means to move elsewhere did so. By the time Chinese immigration was allowed again in 1947, the few residents of the area were generally elderly and in poverty.

Even with immigrants arriving once more, few settled in Chinatown, opting for other areas of the city instead. The 1970s saw another shift, with the arrival of more Vietnamese and Vietnamese-Chinese residents, many of whom opened businesses closer to 107th Avenue. This area, which primarily contained businesses, became known as Chinatown North.

While the 1977 plan to create a space for the older Chinatown faltered, it wasn't completely dead. In 1979, city planners and members of the Chinese community agreed to demolish parts of the original Chinatown (making way for the construction of Canada Place) and re-establish the community in an area bounded by 95th Street and 97th Street, from Jasper Avenue to 102A Avenue. The new location included more residential and cultural development. In 1987, the city installed the Harbin Gate at the entrance to Chinatown South to honour Edmonton's relationship with its sister city. While the plan did lead to some benefits, it didn't lead to the economic and population growth supporters had hoped for.

Chinatown North and South are now closely connected, and efforts such as Chinatown Dining Week have emerged to try to draw more customers. Meanwhile, business owners have expressed frustration with crime related to addiction, homelessness, and a lack of social support for vulnerable people. Chinatowns throughout Canada have been hard hit by the pandemic and a rise in anti-Asian hatred, and appeals have risen for a national revitalization strategy.