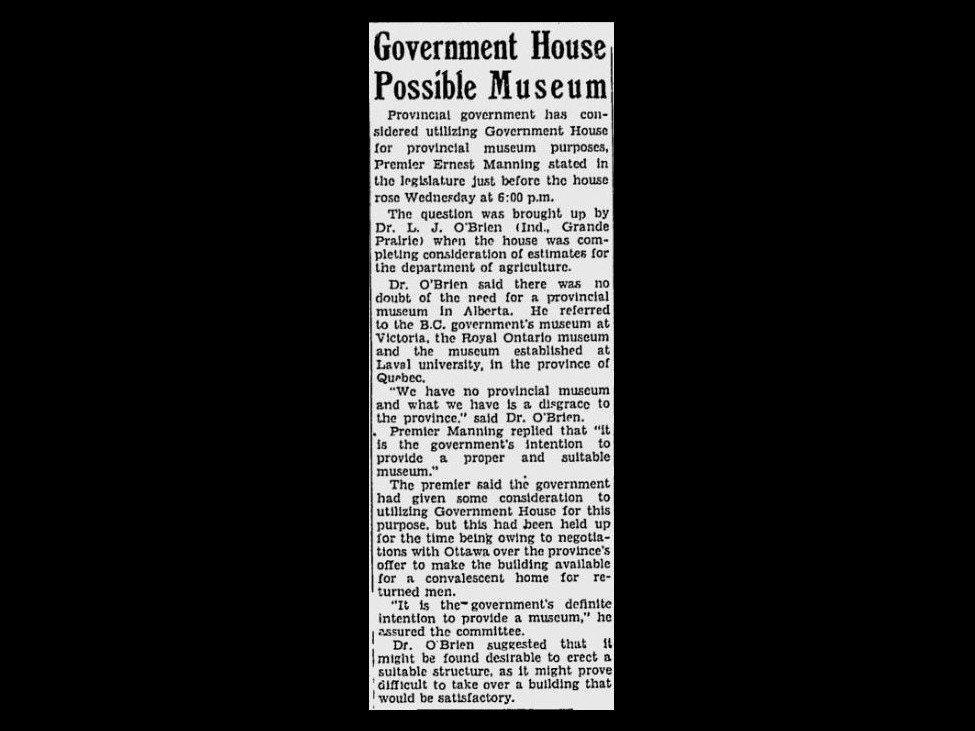 On this day in 1944, Alberta's leaders were talking about turning Government House into a provincial museum. If the idea had come to fruition, it would have been another in a long list of different roles the building has played over its controversial history.

In 1910, Alberta was a young province, riding high on a financial boom. Little expense was spared when it approved the construction of an official residence for the province's lieutenant-governor. A.M. Jeffers, the chief architect of the recently completed Legislature Building, oversaw the mansion's construction. It was set on 28 acres of land in Glenora, overlooking the river valley. The brick building was finished in sandstone brought up from Calgary and worked by stonemasons brought over from Scotland.

When Government House opened in 1913, the reception brought hundreds of guests from around the city and across the province. But it wouldn't be long before the lavish mansion and its expensive furnishings would become a point of contention. As the province's economy slowed down during the First World War, the costs associated with Government House became a frequent target for opposition politicians, newspaper editorials, and angry citizens.

Six lieutenant governors made their homes in Government House from 1913 until 1938, when Premier William Aberhart closed down the building following a heated political showdown with Lt.-Gov. John Campbell Bowen. (Bowen had to move his family into a hotel after being booted out.)

Government House sat vacant until 1942, when it was leased to North West Airlines, which handled much of the cargo delivery to Alaska during the Second World War. Government House served as an office for the airline and a dorm for U.S. airmen stationed in Edmonton. As part of the lease, the furniture was emptied out and auctioned off — an act that the government is still trying to undo to this day.

While there was some talk of turning Government House into a provincial museum, it would remain tied to the war effort for a couple more decades. Later in 1944, the federal government converted it into a hospital to treat those wounded overseas. Once the war was over, it served as a veterans' home until it returned to the province in 1964.

Government House then underwent extensive renovations and repairs. At the same time, that long-awaited Alberta Provincial Museum (later the Royal Alberta Museum) was built just a few hundred metres away marking the country's centennial in 1967. Now the RAM has moved downtown, and there are no clear plans for what will happen to the Glenora building.

Government House persists, however. While no longer a viceregal residence, it is where new cabinet members are sworn in, and it serves as the meeting place for the governing party before each legislative session. It is also a frequent greeting place for foreign leaders and other visiting dignitaries. The building was declared a provincial historic resource in 1985 and a national historic site in 2013 Alberta's newest artist-in-residence, Aeris Osborne, recently announced that Government House would be included in a series of paintings celebrating the province's heritage houses.