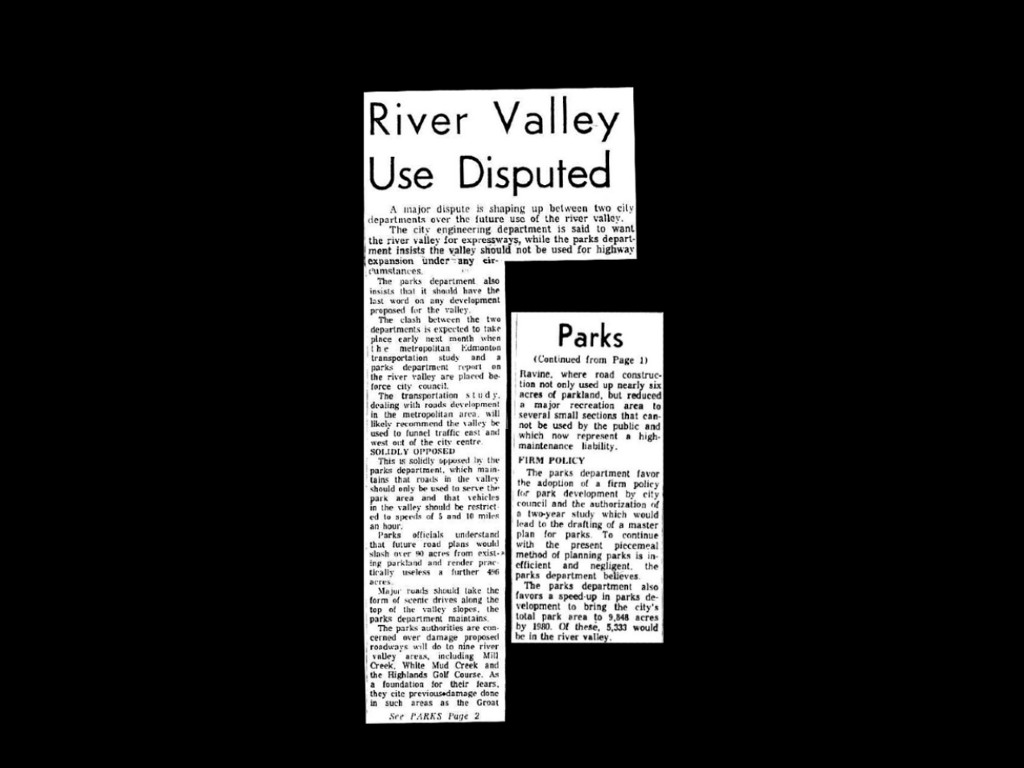 On this day in 1963, a showdown was brewing within the city government over the fate of the river valley.

It's impossible to overstate the influence cars had on civic planning during the 1960s. Edmonton was no exception to this — the city already had a strong automotive culture. To accommodate the rising number of cars, the city's engineering department wanted to see freeways built in the city's river valley. The idea, not surprisingly, was "solidly opposed" by Edmonton's parks department, which instead sought to drastically lower speed limits in the valley, according to the Edmonton Journal.

The article was a prelude to December when the city released the infamous Metropolitan Edmonton Transportation Study (METS). The plan called for a colossal change to the city's transportation system by building half a dozen freeways. METS called for an eight-kilometre freeway loop encircling downtown, with several connector freeways that would thread out to other parts of the city.

It was estimated that the freeways would destroy about 11% of the river valley and make hundreds of acres more of it inaccessible. The Jasper Freeway alone would have eaten up a lot of the valley west of downtown, cutting through Victoria Park, the golf course, and Government House Park before slithering its way up McKinnon Ravine.

McKinnon Ravine was the site of some of the fiercest opposition to METS. When initial survey work and grading began in the ravine in 1965, west-end residents banded together, organized in part by painter-turned-activist Margaret Chappelle. This wasn't just a battle fought in letters to the editor and public meetings; the McKinnon work spurred protests and reports of BB guns being fired at bulldozers. At some point, effigies of two city commissioners were hung from the 142nd Street Bridge with a sign that dubbed them "Vandals of the Year."

Eventually, work halted and the city scrapped METS. A few years later, city council approved the LRT system's construction, signalling a change in its transportation priorities. Only one part of the sprawling METS plan was actually completed: the James McDonald Bridge, which was meant to connect downtown to a freeway south of the river.

In 2022, the city's transportation plan looks much different from METS. There is a greater emphasis on public transit and active transportation like walking and biking and less on wide, land-hungry freeways. Still, cars are the dominant form of transportation in the city, and the need to efficiently plan for them is constant. Freeways remain part of that plan, such as current work to convert the Yellowhead Highway into a freeway within the city limits.