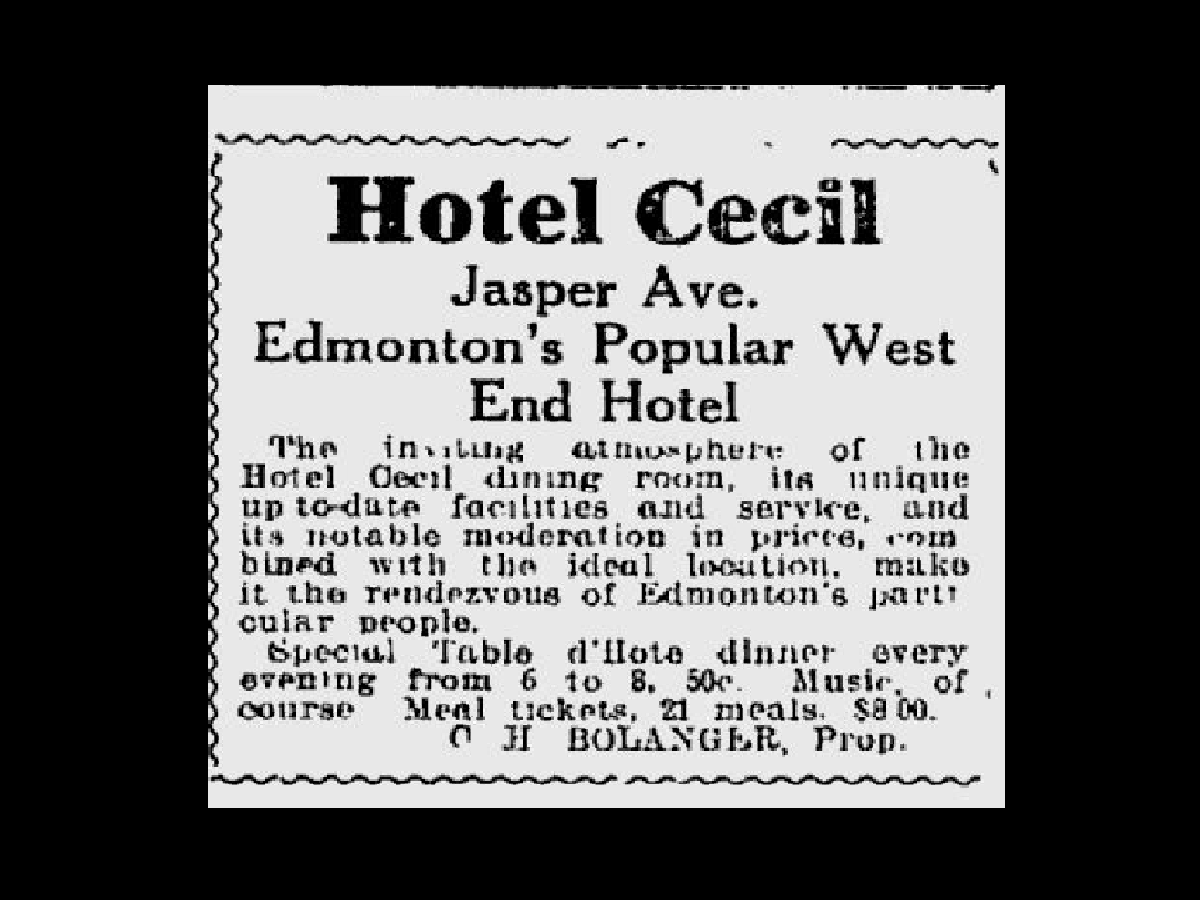 On this day in 1914, the newly renovated Hotel Cecil was advertising itself as an inviting spot for "Edmonton's particular people" on the city's west end.

Modern-day Edmontonians might find a few surprising things in the ad. For one, Jasper Avenue at 104 Street is no longer anywhere near the city's west end. Secondly, the hotel's reputation in its final decades was anything but inviting.

But in its early days, the Hotel Cecil held itself out as an oasis of luxury in the young, growing city. Built in 1906, the brick-and-stone building was easily recognized by the double columns flanking its Jasper Avenue entrance. The hotel was run by Francois Lannic and Charles Belanger, although Belanger soon bought out his partner and became the main owner of the building.

The hotel was expanded in 1910 and again in 1914. By that time, it boasted 65 rooms, a writing room, and a 300-seat dining room that regularly hosted a live orchestra. Special occasions saw the hotel serve decadent meals of caviar, salmon, and venison. The hotel proved to be a popular spot for visitors to Edmonton, especially for workers coming to do land surveys of Alberta. Belanger's father had been a land surveyor, and it is said he understood the particular needs of the profession.

The years between the two world wars were difficult for the city as economic growth cooled. The Cecil saw its reputation begin to decline, a slide that would continue for several decades. The period after the Second World War did see some upswing as the hotel became a popular spot for newly arrived immigrants on their way to settling in Edmonton. But by the 1980s and '90s, the Cecil was seen as little more than an eyesore and a centre of crime, with a reputation for thefts and fights that often spilled out onto the street.

In the late 1990s, the city would invest millions in trying to revitalize 104 Street and encourage residential development. But the Cecil and its rowdy reputation were seen as a hurdle to that goal. Ultimately, years of neglect caught up to the building. In 2003, the Hotel Cecil was shut down due to numerous building code and health violations. A few months later, the building itself would be gone.

The loss of the Cecil is seen by many as the start of the modern 104 Street. The strip has changed significantly in the two decades after the hotel was torn down: new towers were built, specialty stores and restaurants opened, and the strip was the home for the Downtown Farmers' Market before it moved to its indoor digs on 97 Street. While development has cooled in recent years, it hasn't stopped. Early this year, city council approved a plan for a 40- to 45-storey tower integrated into the historic Horne Pitfield warehouse on 104 Street and 103 Avenue.

This is based on a clipping found on Vintage Edmonton, a daily look at Edmonton's history from armchair archivist @revRecluse. Follow @VintageEdmonton for daily ephemera via Twitter.