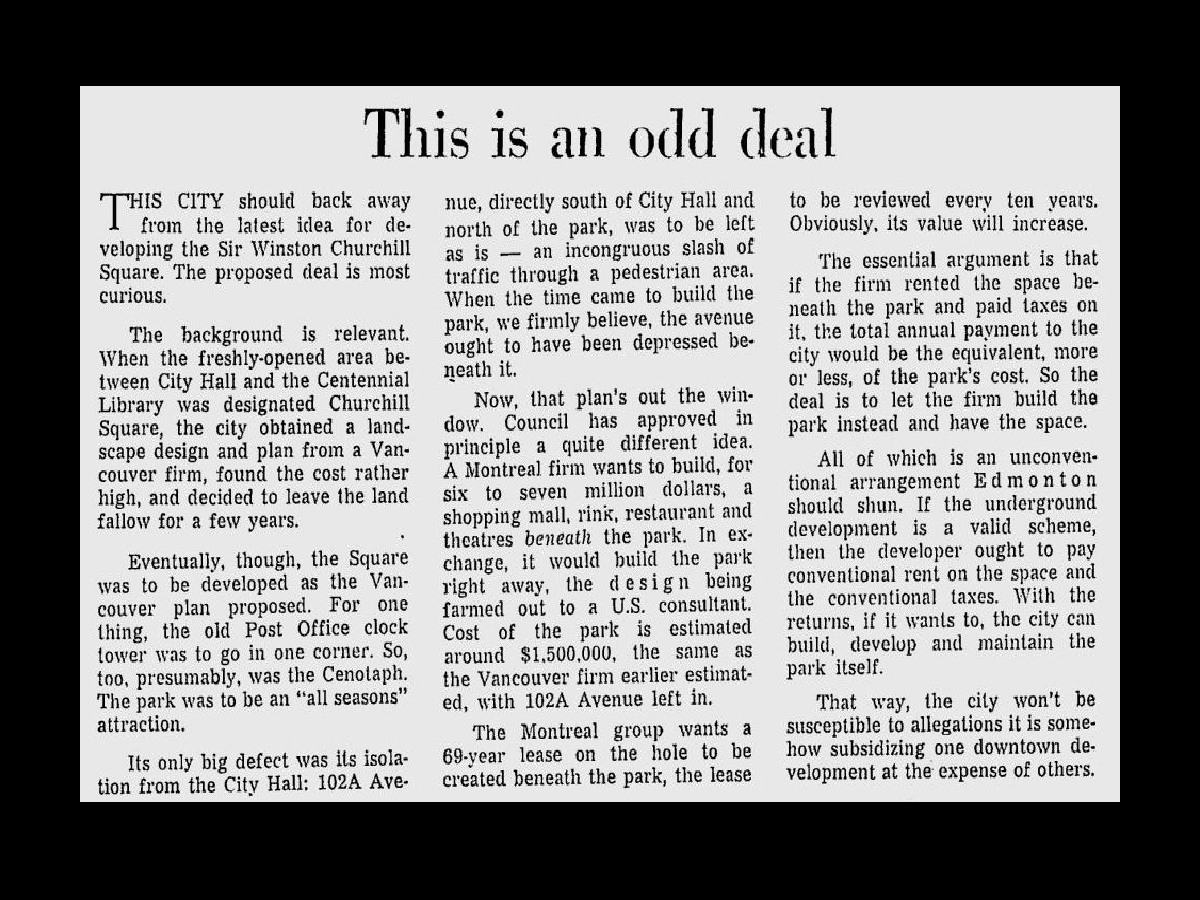 On this day in 1966, people were debating the future of Sir Winston Churchill Square.

The area had been Edmonton's central gathering spot since the city's earliest days. The current square, along with the spot now occupied by the Stanley Milner library, was the site of the original market that served as one of early Edmonton's most vital civic places.

As the city grew, so did its government. By 1912, public servants worked in offices scattered around the city. Council finally decided that all the various departments needed to be under one roof. So they commissioned the Civic Block, Edmonton's first city hall, to face the market square. Over the decades, other municipal staples were built in the same area, cementing it as the seat of Edmonton's civic services.

In the early '60s, there was a desire to develop the square to celebrate Canada's centennial. But Edmonton's city council was unsure what to develop it into. The idea dismissed as an "odd deal" in the newspaper would have seen a shopping mall, rink, restaurant, and theatres beneath the square and a peculiar arrangement with the Montreal developer. Eventually, a plan to build a park was settled, creating a simple space with trees and a plaza on the south side.

The park was named after British Prime Minister Winston Churchill shortly after his death in 1965. It was the first in a curious wave of Churchill namings across Alberta, a province he had briefly visited once 30 years prior. In 1982, a local Churchillian historical society funded the statue of the man that stands in the square's northwest corner. The granite covering the plinth it stands on was part of the old city hall building.

Churchill's reputation is both as an instrumental wartime leader during the Second World War and as a racist and fervent supporter of colonialism. So it is no surprise that his connection to the square has been a source of controversy and protest. In 1969, Cree women's rights activist Lillian Shirt drew national attention after she erected a teepee on the square. She lived there with her children for 12 days to protest discrimination and inadequate housing options for Indigenous women. Demands to change the name of the square continue to this day.

Churchill Square received another overhaul in the early 2000s — this time for Edmonton's centennial. The original plan traded grass for cement and closed off the square from the civic buildings around it to create an "urban room." It was not well received: some compared it to a sacrificial temple, while Edmonton Journal columnist Paula Simons wrote that some elements had a "disturbingly fascistic air." City planners rethought the design, which got a warmer reception. Construction finished in 2004, giving us Churchill Square's current look.

Churchill Square is long removed from its days as the city's market square. But it remains a central spot for Edmontonians to gather, hosting scores of celebrations and demonstrations. This week, the square is pulling double duty to host both the Works Art & Design Festival and the Edmonton International Street Performers Festival, with dozens more events planned throughout the summer and into the fall.