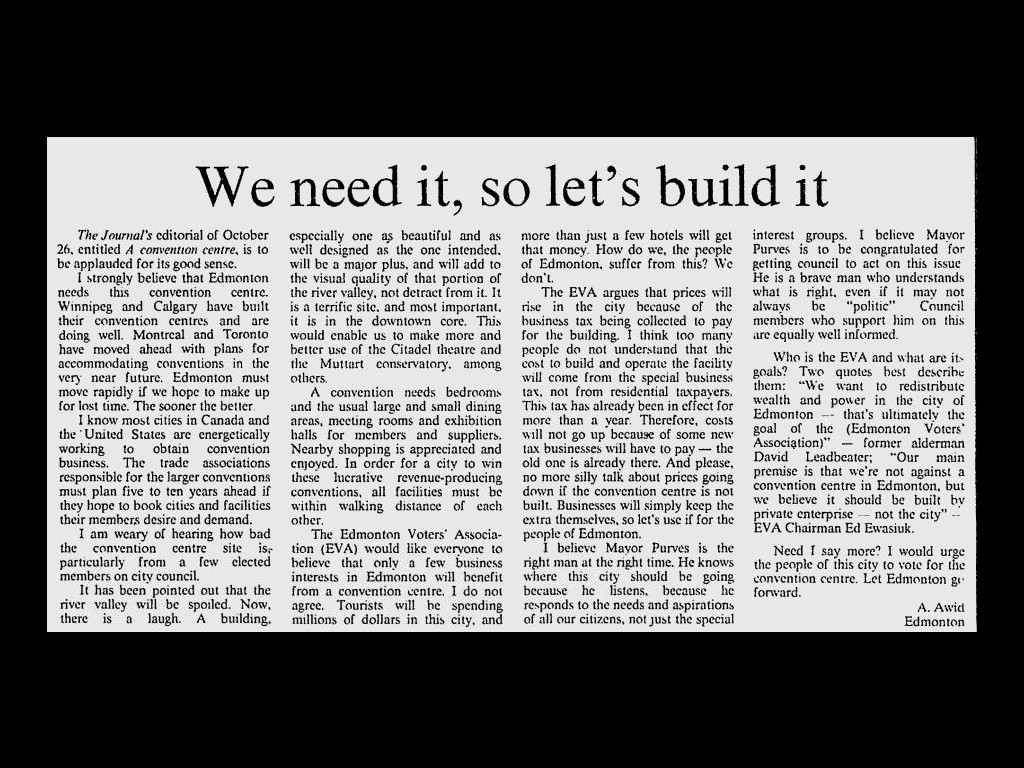 On this day in 1979, Edmonton was again debating whether to build a convention centre, which at least one letter writer was very much in favour of.

Whether the city should build a convention centre seemed to be a constant question during the last half of the 20th century. The idea of a centre (combined with an arena or stadium) was nixed by voters in 1963. A similar idea was approved five years later but was shot down again in 1970 after cost estimates increased on the Omniplex proposal.

By the time the question came around again at the end of the '70s, both the Northlands Coliseum and Commonwealth Stadium had been built, so there was no longer a desire for a combined sports/convention centre.

The 1979 plebiscite on the new convention centre was a bit confusing — since the city still had approval from the 1965 vote, the question wasn't whether to build the convention centre, but rather whether to take away the option. The measure to remove the approval failed, about 52,000 to 29,000. Construction began the following year on a site off Jasper Avenue, along the escarpment overlooking the river.

The design of the convention centre was an ambitious one. Built into the side of the hill, about 70% of the facility extends underground and under Jasper Avenue. The exposed section of the building is made up mostly of glass windows, offering an impressive view of the river valley.

In 1998, Shaw bought the naming rights to the centre in a 20-year deal. When the deal expired in 2018, the Shaw Conference Centre became the Edmonton Convention Centre again. It is now managed by Explore Edmonton, which has tried to market it as an ecologically responsible event space in recent years. In 2020, a modernization project saw hundreds of solar cells installed in the windowed atrium. A section of the cells also spells out in Morse code an excerpt of "Gifts of a River", a poem by E.D. Blodgett.

Earlier this year, work began installing hundreds of solar panels on the convention centre's roof, making it the largest rooftop solar array in the country.