After a full day of budget deliberations on Dec. 9, city council is on track to approve a 0% tax increase for 2021.

Administration proposed 94 budget reduction strategies totalling $56.5 million to bring the 3.2% tax increase council approved in the spring down to zero. The proposed cuts included $18.2 million in workforce reductions, $13.2 million in service-level reductions, and $9.7 million in efficiencies. While council largely supported administration's proposal, it approved nearly a dozen amendments throughout the day.

A plan to reduce service hours for peak and rapid frequency routes in next year's Bus Network Redesign would have saved $947,000 in 2021 and $466,000 in 2022, but council unanimously rejected the proposal.

"If we're going to create these 15-minute neighbourhoods...we need to actually have the service to back that up," said Coun. Andrew Knack, referring to the districts contained in the City Plan that council approved on Dec. 7. 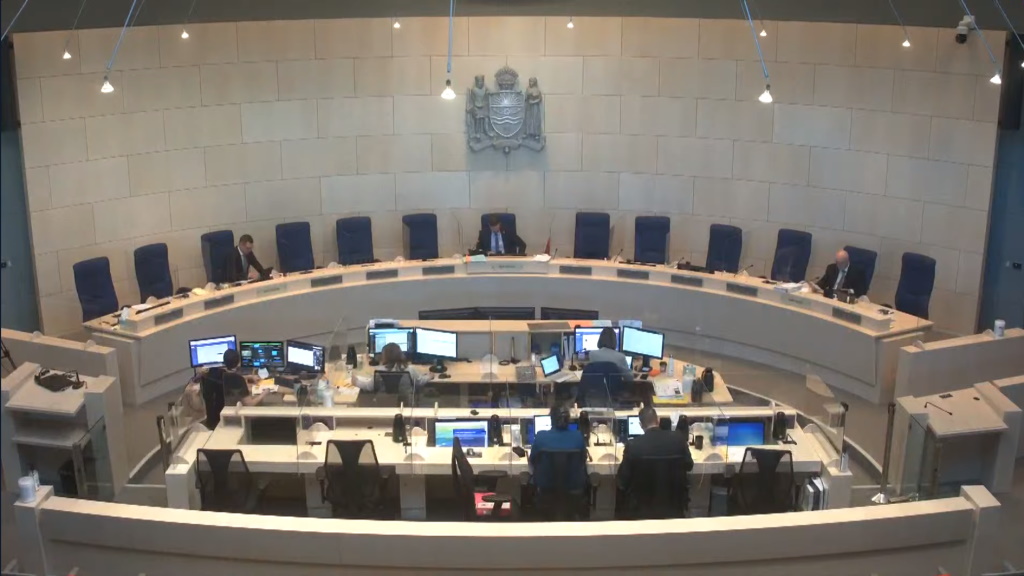 Most councillors participated in the meeting remotely as this screenshot from the live stream shows.

Pools and arenas saved for now

Administration had proposed saving $1.4 million by closing the Scona, Eastglen, and Oliver pools, the Oliver and Tipton arenas, and an asphalt plant. Council unanimously voted to save the recreation facilities, for now. "Eventually a council in a pinch is going to be met with a facility that it just can't justify anymore," Mayor Don Iveson said in response to the motion.

Most of the facilities in question have been on the chopping block before, with the Eastglen Leisure Centre threatened with closure four times in the past five years, according to a document prepared by the affected community leagues.

“Council is encouraging people to move into central core neighbourhoods... to go ahead and take away the amenities that are currently there... doesn’t really make sense,” Queen Alexandra Community League president Julie Kusiek told Global News on Nov. 30.

Council also approved $75,000 in 2021 to fund planning and design of new baseball diamonds, $300,000 in 2021 to fund the next work on Ivor Dent Sports Park, and $1 million for the YMCA of Northern Alberta to reopen the Castle Downs Family YMCA next year.

A transfer of $7.5 million from the Financial Stabilization Reserve will be used to reopen the city's recreation facilities sometime in 2021.

A proposal to spend $1.1 million in 2021 and $2.6 million in 2022 to fund design work for the Rollie Miles Leisure Centre was postponed to the 2021 spring budget adjustment.

Coun. Mike Nickel had proposed withdrawing $98.3 million from the Ed Tel Endowment Fund in an attempt to avoid making any budget cuts in 2021 while also reducing taxes.

"Before making drastic cuts... I'm asking to buy some time by tapping into our reserves," he said during the debate. The proposal would have used $64 million to prevent cuts to the 2021 operating budget and $34.3 million to provide a 2% tax reduction.

Iveson suggested the proposal would result in a tax increase as high as 7% in 2022, with Knack pointing out the hike would likely need to be even higher with the reduced principal contributing a smaller annual dividend to the city.

The Ed Tel Endowment Fund, established in 1995 with assets generated by the sale of Edmonton Telephones to Telus, had a market value of $863 million as of Dec. 31, 2019. It paid a regular dividend of $38.8 million plus a special dividend of $9.7 million last year. According to the 2019 annual report of the City of Edmonton's Investment Committee, the fund has paid $834 million in dividends to the city since 1995.

The Ed Tel Endowment Fund Bylaw requires that any withdrawal of funds aside from dividends be approved only by amendment to the bylaw, which would require a public hearing.

Many councillors spoke forcefully against the proposal. "If I could vote no twice, I would," said Coun. Scott McKeen. Knack called the proposal "irresponsible."

"To suggest that we cannot look at reserve funds at this time... strikes me as absurd," Nickel said in his closing remarks.

Council will meet to finalize the budget on Dec. 11.

According to administration, the last time the tax increase was 0% was in 1997.