City council's urban planning committee met on Jan. 19 to discuss initiatives to support more and better infill in Edmonton, as per the Infill Roadmap 2018. It also received updates on infill compliance, and fire protection.

In 2020, seven additional actions from the infill roadmap were completed.

"The actions completed in 2020 have focused on providing more and better information to the public, exploring creative opportunities to support additional infill, and aligning our regulations to match the city’s commitment to welcoming more people and new homes into older neighbourhoods," said the report. "The remaining actions reflect the city’s ongoing commitment to excellent service and ambitions to tackle broader issues through major initiatives such as the Zoning Bylaw Renewal and City Plan implementation projects." 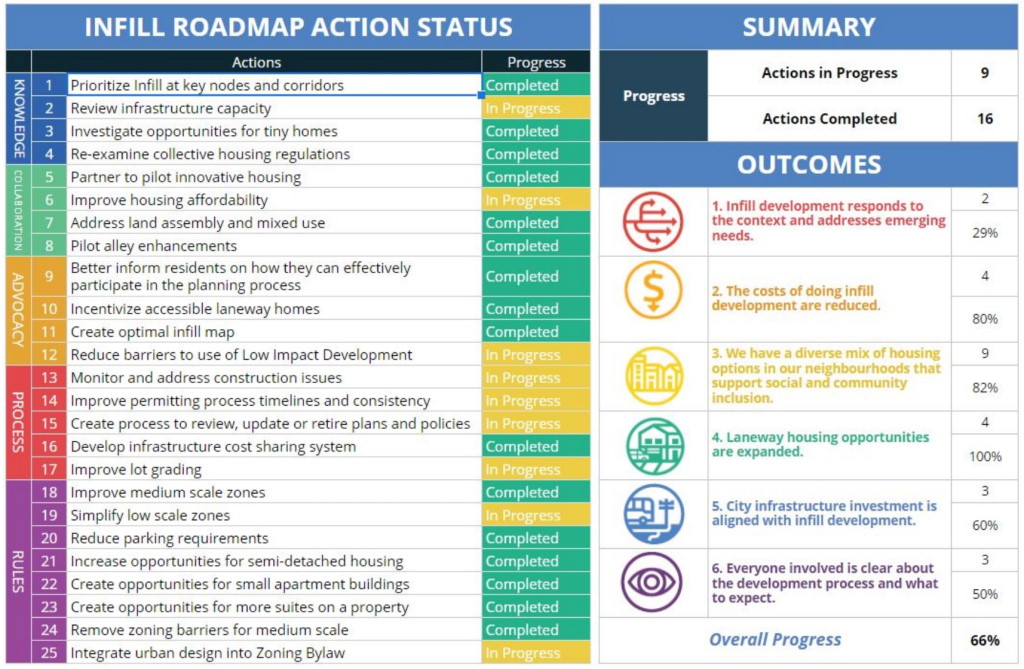 A summary of progress on implementation of the Infill Roadmap 2018. (City of Edmonton)

Developing tools to improve housing affordability in all neighbourhoods, improving the consistency and timelines for the infill development permitting process, and making improvements to regulate how the city addresses emerging issues related to infill construction are all on the list of actions that will need to be sustained.

Beyond 2022, projects and targets for infill will fall under the direction of the new City Plan.

The infill compliance team also provided its annual report to the urban planning committee at the meeting. The role of the team is to work with builders "to ensure infill is implemented in a way that makes Edmonton a safe and attractive place to live."

An update on infill compliance in 2019. (City of Edmonton)

The team's 2019 data found that overall the number of complaints decreased by 22% compared with 2018, which in turn meant there were less enforcement actions.

Moving forward, it is recommended that there is no annual reporting from the compliance team, and updates may be provided to council by memo when necessary.

An update on the infill fire protection cost share program, which "invests in fire protection infrastructure required to support infill development projects," outlined the results of the pilot. Seven projects were selected for funding out of 34 that were submitted. More projects could not be supported due to a lack of funding. The pilot had a budget of $1.2 million per year.

Data gathered through the pilot is being used to inform EPCOR's funding request for the 2022-2026 infill fire protection program, which proposes an annual budget of $4 million.

The Infill Development in Edmonton Association indicated in a recent newsletter that it supports the proposal.

"We need a program that will provide certainty around infrastructure funding, otherwise, projects either die on the drawing table, or require future infill residents to pay higher home prices for upgrades that benefit an entire block," the organization wrote.