The city’s next municipal election is this fall, and it is the first since the provincial government made changes to the Local Authorities Election Act. Some are wondering how this will affect the actions of Edmonton’s mayoral and council candidates.

At Taproot’s third of eight listening sessions, more than 20 Edmonton residents weighed in on issues of integrity within city council. The sessions were prompted by Taproot's People's Agenda, a document that’s being compiled based on responses to this question: What key issue do you want the candidates to talk about as they compete for votes in the 2021 municipal election, and why?

Participants at the event raised issues with the changes to local election rules, including removing some of the limits on campaign donations, changing regulations for third-party advertising spending, and moving the deadline for candidates to disclose finances until after the election. Attendees said the higher donation limits combined with the lack of disclosure may open the door for large donors to more easily manipulate election outcomes. 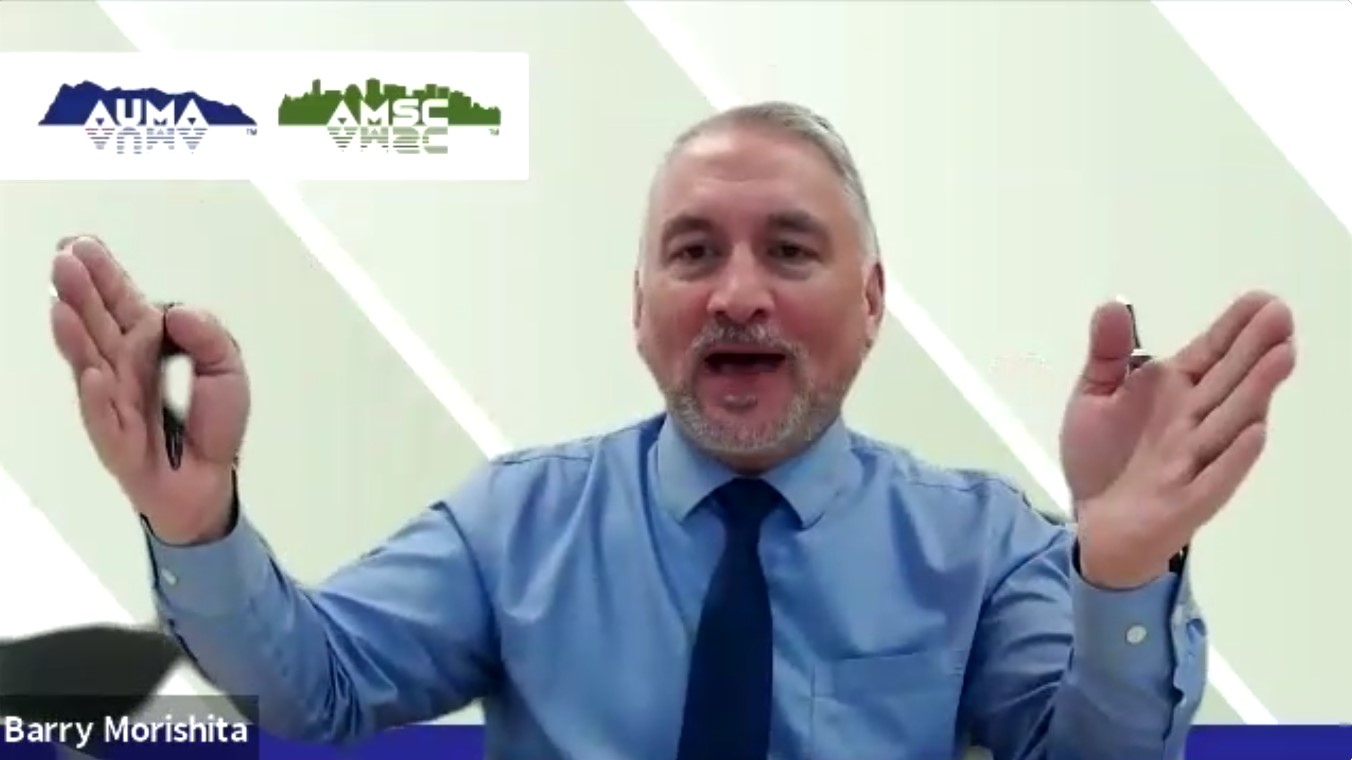 Barry Morishita explained why transparency is so important to an audience of Edmonton residents on March 25. (Taproot Edmonton)

Most people at the session said the biggest issue with campaign finances is that candidates no longer have to disclose where their donations are coming from during the campaign. This makes it difficult for voters to know how the candidate's platforms are being influenced.

The event's featured speaker, Barry Morishita, who advocates on behalf of local governments as the president of the Alberta Urban Municipalities Association (AUMA), agreed that disclosure rule changes are problematic.

"We don't have to have disclosure now until after the election. That's way too late for people to determine whether it's being manipulated or whether someone's not being true to the things they say in public," Morishita said. "That's a blatant attack on democracy."

He encouraged Edmonton voters to push candidates to disclose finances early, regardless of the rules.

"Make candidates accountable by asking them to disclose before the vote. Those that are refusing, you should ask them why they are refusing," he said.

Morishita said part of the reason transparency is so important is because the rules also changed to raise donation limits to $5,000 from $4,000, and allow donors to give to as many candidates as they want.

"(AUMA has) always had a principle about keeping big money out of municipal politics," he said. "It drowns out the grassroots voices, and allows candidates ... to short circuit the democratic process."

He added that AUMA was advocating for a $2,500 limit, with room to lower it even more later on.

Participants generally agreed with Morishita. One Edmontonian said that campaigns with more funding would have an easier time winning elections, meaning large donations may be more influential to a candidate than individual votes. This may make candidates less responsive to the issues of their constituents, and more apt to cater to their largest donors.

The provincial government also introduced a donation limit of $30,000 to third-party advertisers, which are sometimes known as political action committees (PACs). Critics, like Morishita and Calgary Mayor Naheed Nenshi, have said that amount is too high. Edmonton residents at the listening session agreed that there needs to be a lower cap, since the current rule allows PACs to outspend any other sources of campaign funding. 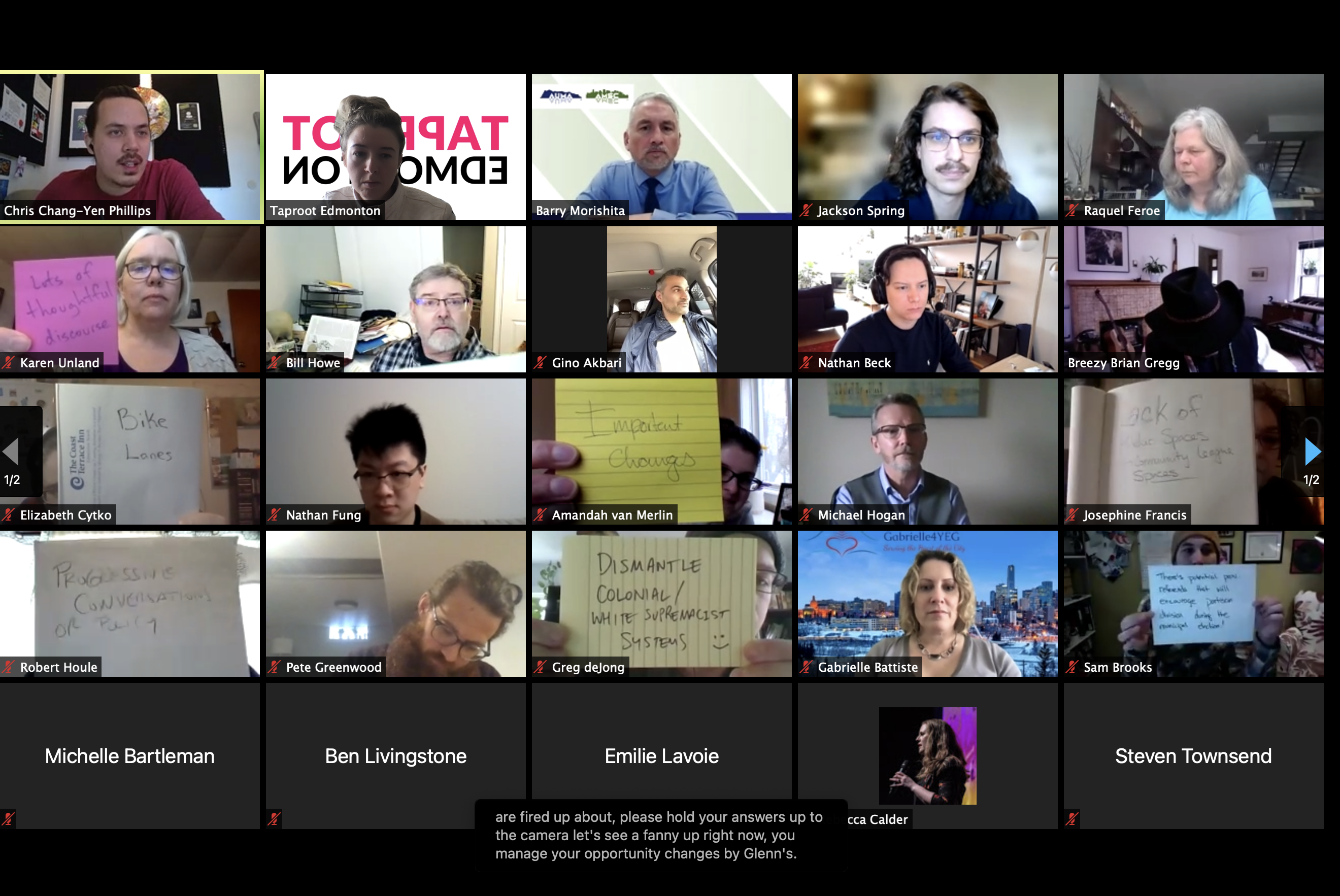 At Taproot’s third of eight listening sessions, more than 20 Edmonton residents weighed in on issues of integrity within city council. (Taproot Edmonton)

One participant said this may be a bigger issue in the upcoming municipal election than in the past, because of the COVID-19 pandemic. Undecided voters are often swayed by personal interactions with others, but with less face-to-face interactions, paid campaigns may have a greater effect.

Another attendee was concerned about a lack of transparency at the provincial level regarding its public engagement on municipal issues. They said the province is not listening to the advocacy of AUMA and other municipal representatives, noting that the municipal election rule changes were made against AUMA's wishes.

After the rule changes were introduced in June 2020, AUMA issued a statement saying the "provincial government has rejected the principles of local democracy."

Some participants speculated the rule changes would allow the provincial government to support municipal candidates with platforms complementary to its own agenda.

A few people brought up slates, which are groups of candidates in different wards who run on a coordinated platform — typically with a partisan agenda. They brought up the concern that the rule change allowing donors to give to as many candidates as they want opens the door for the province or private donors to establish slates.

"Slates would be terrible," Morishita said, explaining that candidates who are part of slates are stuck with their platforms, and tend to be less willing to change their positions on issues. Participants want candidates to focus on city issues, and said introducing partisanship or the interests of the provincial government would take away from that.

Overall, Morishita said he believes municipalities should have more autonomy in how elections are run, generally.

"The cities of Calgary and Edmonton should really set their own rules," he said. "We believe the local perspective is best."

Taproot’s People's Agenda listening sessions will take place weekly until the end of April. The next session on April 1 will be a discussion about concerns related to transportation and mobility. Those interested in participating can register online.