The Alberta government announced new COVID-19 restrictions on May 4, as mayors in the Edmonton region continued to grapple with whether public health restrictions should apply to every municipality, or if only areas with high numbers of COVID-19 cases should be targeted.

The new mandatory measures, which include restrictions for schools, outdoor gatherings, retail, patios, and more, arrived as cases continued to rapidly rise. The measures apply to "municipalities or areas with more than 50 cases per 100,000 people and with 30 or more active cases." Areas that don't meet those numbers will still be required to return to Step 0 level restrictions.

Municipalities in the Edmonton region aren't currently included on the province's list of areas that fall below that threshold. This marks a change from the province's decision on April 29 to implement a series of restrictions for municipalities with more than 350 active cases per 100,000 people and more than 250 cases in total.

Earlier this week, Edmonton Mayor Don Iveson said region-wide restrictions would be more effective at limiting the spread of the virus because having different rules between municipalities could encourage people to travel to more open areas.

"As soon as we were declared a hot spot and had to shut down certain activities, people from Edmonton were calling to try to book recreation facilities and ice time in the bedroom communities and counties around us," he said on May 3.

Before the new restrictions were announced, City of Leduc Mayor Bob Young told Taproot he is comfortable with the province's approach and didn't think people would abuse differing restrictions.

"The people in our community are fairly aware of the rules," he said. "I'm hoping that most people are only traveling when necessary." 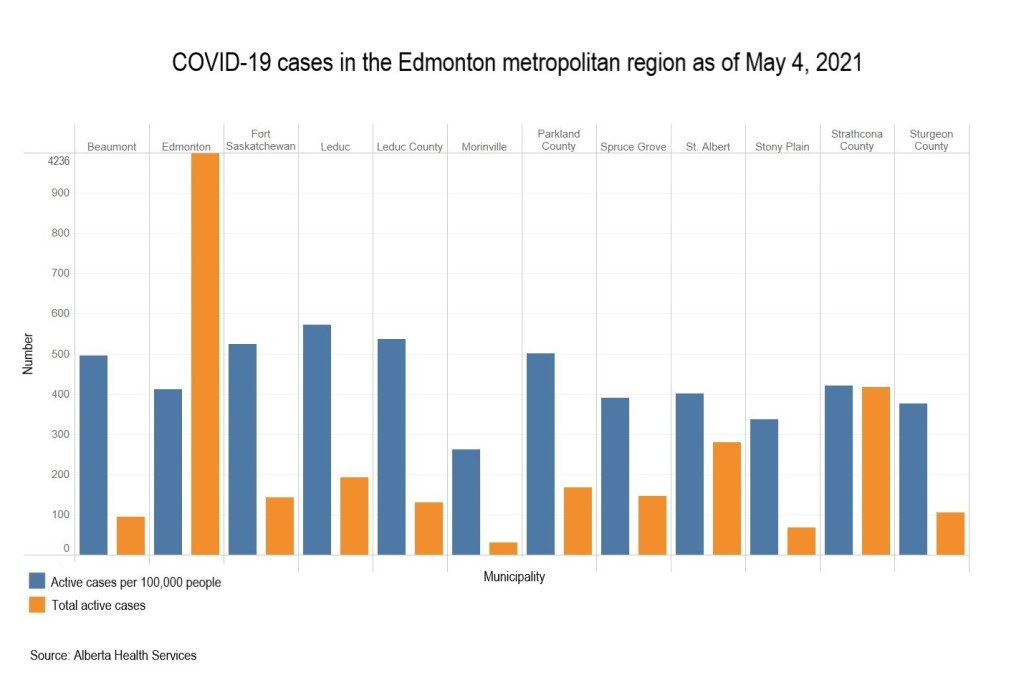 While restrictions introduced on April 29 only applied to Edmonton, St. Albert, and Strathcona County, it appears that all municipalities in the region are now subject to the new measures. As of May 4, the provincial government did not have COVID-19 data posted for Bon Accord, Bruderheim, Calmar, Devon, Gibbons, Legal, Redwater, and Thorsby. (Data courtesy of Government of Alberta)

Leduc was not considered a hot spot on April 29 because the city's total cases were below the province's threshold at that time.

Although Young shared Iveson's concerns about people traveling in the region, an issue Leduc experienced earlier in the pandemic, he said the city found a solution by keeping recreational facilities open to local residents only. He added that he had not seen high numbers of visitors from other areas recently.

While Leduc is now considered a hot spot due to the new threshold requirements, Young said cases in the city have been declining since it saw a spike earlier this year when total active cases went from four to 284 in under three weeks. He is confident numbers will continue to decline.

Fort Saskatchewan Mayor Gale Katchur said in an emailed statement that the city will continue to follow the advice of Alberta Health Services, but that she "acknowledge(s) viruses don't care about boundaries."

The mayors of Leduc County and Beaumont, two other areas among the highest per capita case numbers in the region, did not respond to requests for comment.