The trail network in and around Edmonton's river valley is subject to flooding, landslides, and deteriorating infrastructure that can leave many paths inaccessible.

According to City of Edmonton data, 28 sections of trail in the North Saskatchewan River valley, Mill Creek Ravine, and Whitemud Creek are closed, and the city is cautioning against using three others.

The majority of the closures are due to construction, mostly related to infrastructure that is part of the trails. Six closures are due to eleven pedestrian bridges in Mill Creek being replaced, after a city report last year found they had deteriorated beyond the point of repair. The bridge replacements are estimated to be finished this fall, according to the City of Edmonton data. Other sections in the river valley are closed due to nearby neighbourhood renewal projects and the construction of the Valley Line LRT.

In addition, there are six trail renewal projects scheduled to start in 2021 that are not yet included in the dataset, Paul Lach, the general supervisor of geotechnical engineering for the City of Edmonton, told Taproot in an emailed statement.

However, a significant number of trails are suffering from geological hazards, like erosion and slumping, which means a portion of the trail has started to slide down a slope. A few of these hazards are severe enough to cause permanent closures. The data does not indicate when trails with temporary closures related to geological hazards will open again. 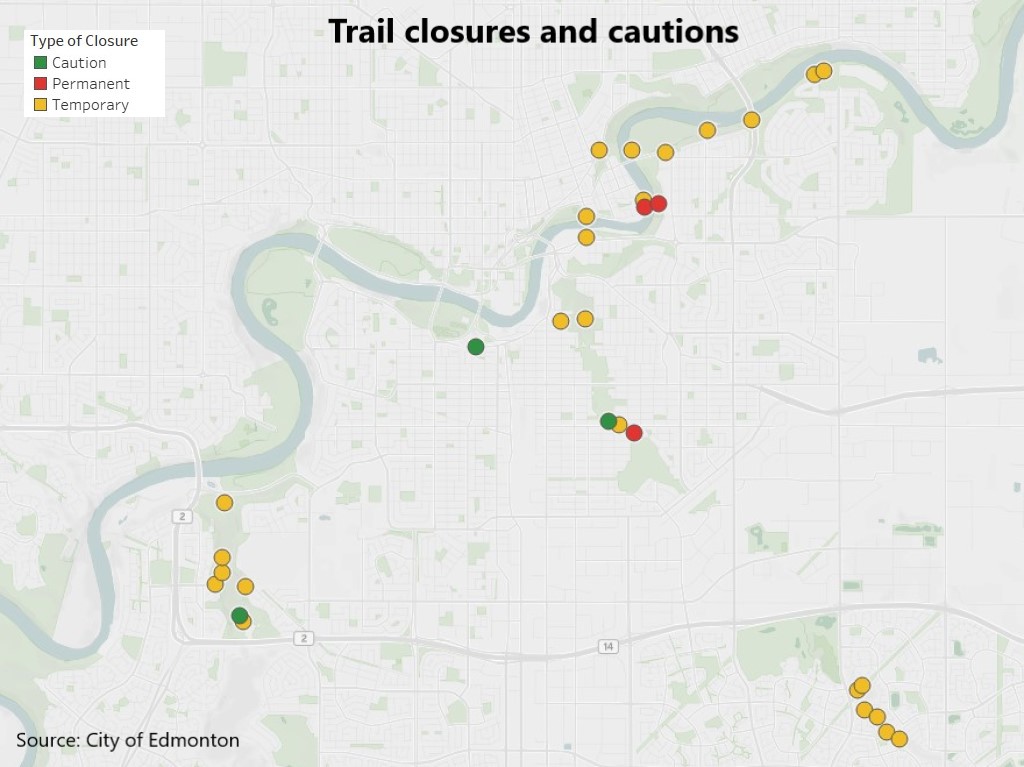 Lach said that although these hazards are expected in the river valley, rainy weather and high water events in the North Saskatchewan River over the past couple of years have increased their prevalence.

"Significant rainfall in 2019 and 2020 contributed to a greater number of new landslide hazards, trail erosion, and slumping issues throughout Edmonton," Lach said.

The river valley is particularly at risk of slumping and landslides, which account for nine of the closed sections of trail. Lach added that these hazards may get worse as global temperatures rise.

"Climate change, and specifically an increase in the occurrence and severity of high water and rainfall events, does pose a risk of increased damage to trails in the river valley," he said. 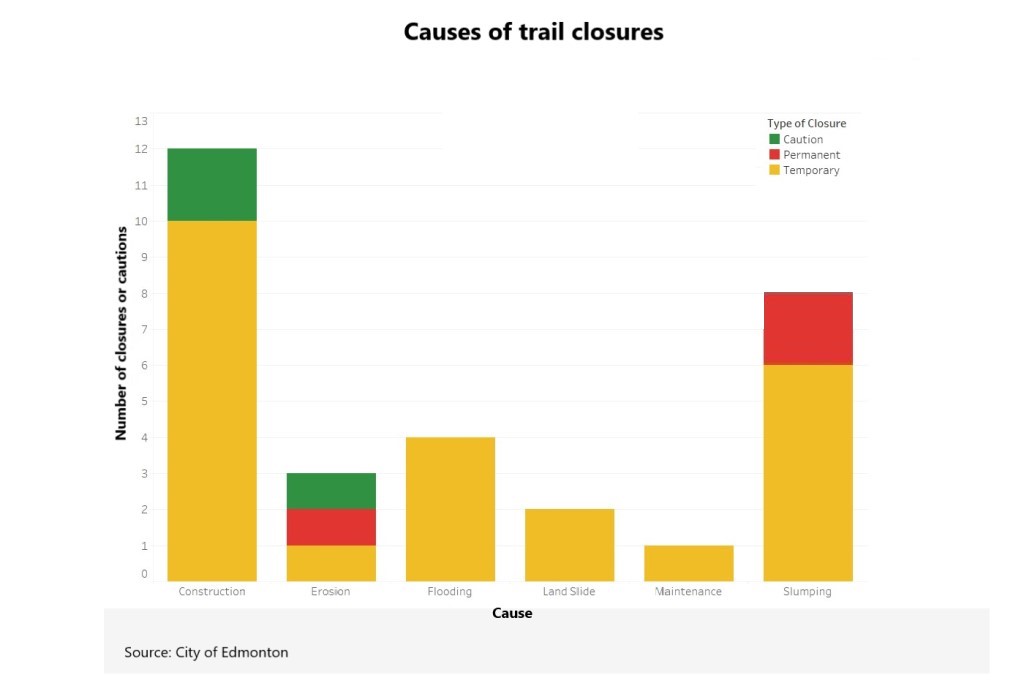 Lach also noted that the city has integrated the concept of climate resilience into both the City Plan and the Community Energy Transition Strategy and Action Plan, which means the city is considering the impacts of climate change into the future when designing and maintaining infrastructure in the river valley.

He said $3 million annually of the city's budget for 2019-2022 has been allocated to managing the hazards caused by slope instability, and approximately $20 million annually is going towards river valley renewal projects.

"While it is not possible to predict the exact effect climate change and the associated conditions will have on our river valley trail system, the city is continually working on repairing existing trails and developing new connections," Lach said.