More than $37 million in funding from the Capital City Downtown Community Revitalization Levy (CRL) would help Qualico de-risk its initial investment in the Station Lands project, administration says in a new report for city council's executive committee on June 14.

The city recommends $26.5 million for the 103A Avenue pedway, an underground pedestrian tunnel from the north end of Churchill LRT Station to the Station Lands site, with connections to the Royal Alberta Museum. First conceived of as part of the now defunct Galleria project, pedway construction began in 2016 with the shell north of 103A Avenue already built at a cost of $3.8 million.

Currently, the pedway is not eligible for CRL funding as "the opportunity to pay for the pedway ended when the Galleria project ended." As a result, administration recommends amending the CRL plan to include the pedway as a catalyst project. That would require provincial approval, however, and administration states that pursuing the proposed amendment is "not without risk."

Administration also recommends $24.3 million for publicly accessible amenity spaces at Station Lands, $10.6 million of which is for the first phase of development. Another $20 million in streetscape improvements is recommended to help "ensure street vibrancy is supported." Both would be part of the Green and Walkable catalyst project already identified in the CRL.

If all three recommendations are approved, funding contributed by the City of Edmonton through the CRL would total $70.8 million. Administration says "the effect on projected CRL finances is minimal." 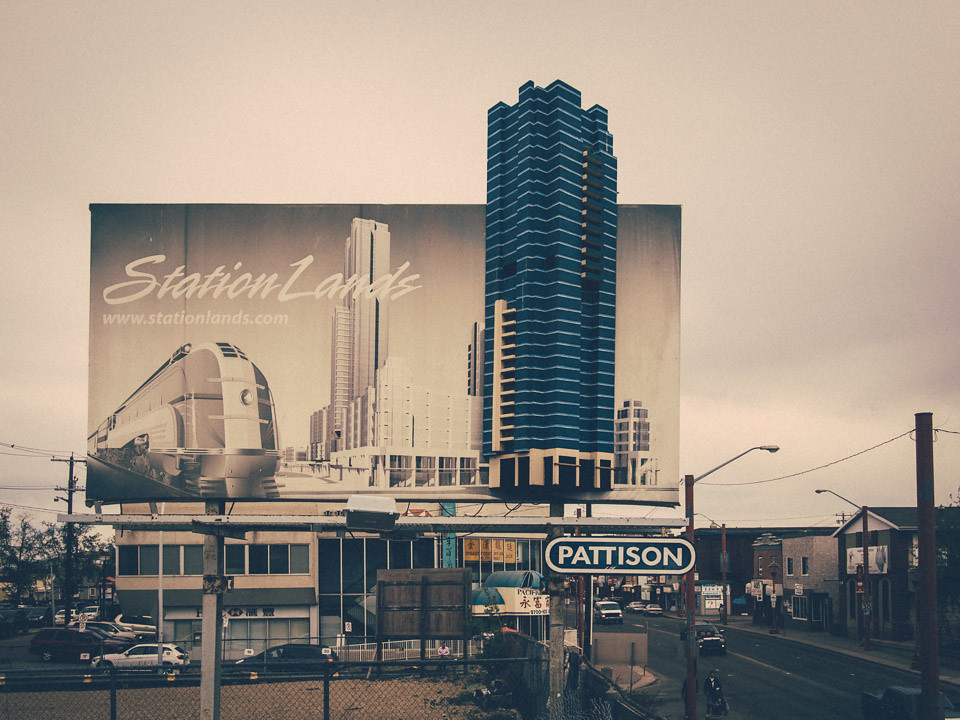 A billboard for the Station Lands project in 2013. The project has been stalled since the completion of EPCOR Tower in 2011. (Ian McKenzie/Flickr)

Qualico says the initial CRL-funded investment is required to "unlock" the potential of $841 million in development at Station Lands. The first phase of development would represent $184 million in private investment and could create up to 1,000 full-time equivalent jobs.

The company says the proposed pedway could "help densify and reduce the auto usage in this area of the city thereby contributing to the (City of Edmonton)'s goal of reducing the carbon footprint and commitment to make a change for climate." Administration further suggests the pedway "would provide a way for future expansion of the Downtown District Energy system to include connections to Station Lands and other sites north of 103A Avenue."

Qualico envisions six towers when the Station Lands development, located between 97 Street and 101 Street south of 105 Avenue, is complete. So far, only EPCOR Tower has been built on the site, though a development permit has been approved for two new towers that include 485 residential units and more than 20,000 square feet of commercial space.

The company says third party forecasts identified "a 30-year cumulative incremental tax gain of $410 million upon the completion" of the project.