It's been over ten years since Nate Box opened the modest but mighty Elm Cafe in Oliver, and it's safe to say that in that decade, he's seen it all. Now at the helm of Black Box Hospitality Group, made up of four businesses including restaurants and a liquor store, even that experience couldn't prepare him for the challenges wrought by a global pandemic.

"The hardest part was the initial closures in [March] 2020," said Box, "We laid off nearly 60 staff members overnight."

Box's longevity in the hospitality business is no accident, however. He attributes much of the company's success in navigating the changing restrictions to his strong team and their ability to continuously adapt. He also said some of the changes made in the last year may end up being permanent.

At June's Delicatessen, for instance, the takeaway menu was expanded with more transportable food, and the restaurant added shelves for pantry and home items.

"It's strange [be]cause we're not sure if the plated-style menus we initially came up with will ever return," said Box. "This grab-and-go style has been so much more accessible and simple to execute."

Box shared that Highlands Liquor has, like other liquor stores in the province, been busy. A loyal clientele who return for the curated selection and staff knowledge has helped the business overcome narrow margins.

District, on the other hand, was hit hardest, as it has been closed for nearly ten months in total since March 2020. Reliant on traffic from workers occupying the surrounding corporate and government towers, Box said that District won't resume even partial operations until after Labour Day. In the meantime, the space has been transformed into a pizzeria from Wednesdays to Sundays, called Young & Restless.

"Pizza just makes sense for the District space and the current dining and takeout trends," said Box. "Not to mention that that neighbourhood is in a bit of a pizza desert." 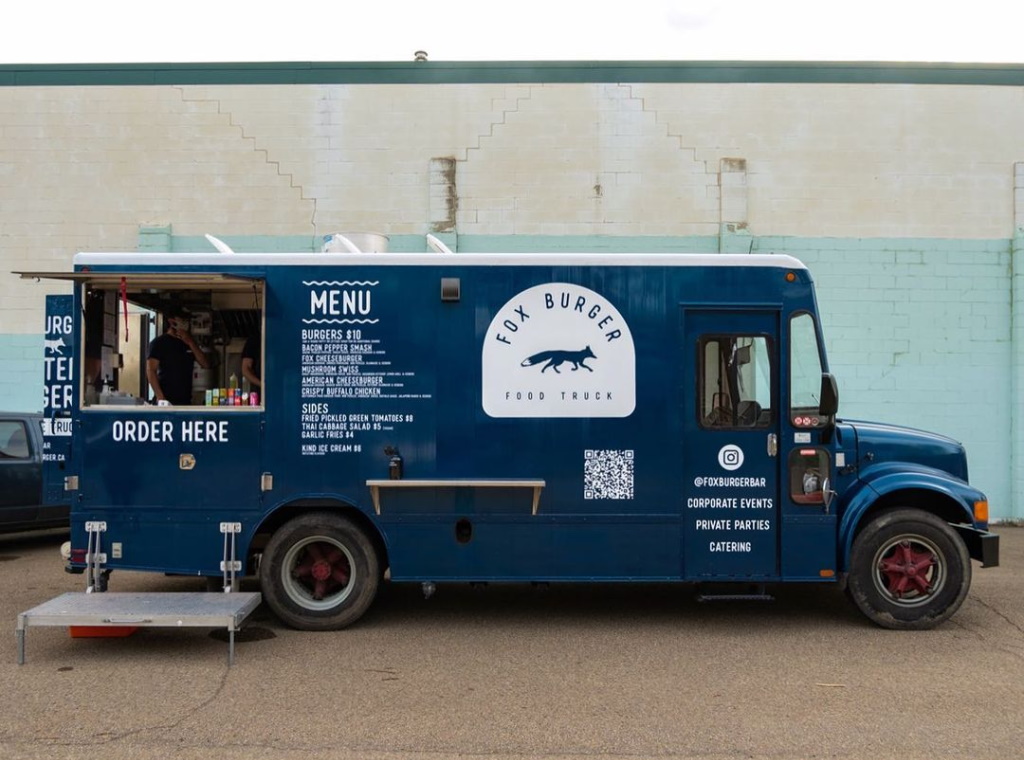 The Fox Burger food truck launched in May. (Fox Burger/Instagram)

Box acknowledges and supports the success of other pizza concepts that have developed during the pandemic such as Sepp's and High Dough, but is aiming to be more affordable and accessible than his counterparts.

While previous menus at District included pizza, the pies served at Young & Restless are quite a bit different.

"[That pizza] wasn't the kind you could box up and take out," said Box. "So we went back to the drawing board…Erica [Box, chief baker] spent 6 weeks or so figuring out a dough recipe that would work."

The cauliflower and sage pizza has carried over to the new menu, but other topping combinations, such as mushroom ricotta and meat lovers, are all different.

Black Box's newest establishment, Fox Burger, required the biggest pivot. Pre-pandemic, it relied (as most other restaurants did) on in-person dining.

"We learned and adapted new software, websites, and promotions to change on the fly," said Box. "And the neighbourhood and city rallied behind us to be their go-to choice for burgers and beers."

The food truck was a fortuitous addition when an ad for a fair-priced, well-equipped truck came up.

"Through the pandemic, our limitation has been location and size of the kitchen," said Box. "We didn't and don't need a big ass dining room to do what we were doing, we needed a bigger kitchen."

The Fox Burger truck has been in operation since May, with Wednesdays earmarked for service in different areas across the city.

"It's been great fun and also such an amazing way to test and engage with other neighbourhoods," said Box. "We've had block-long line ups and even served 200+ burgers one evening in the pouring rain."

Box sees the truck as an additional revenue stream that will help Black Box recover in the long run. While he stresses that the company has been doing okay, Box isn't certain of the future, even with the removal of all restrictions as of July 1.

"To be frank, I think that small businesses, especially those like ours in hospitality, are unaware of our vulnerability right now," said Box. "Summer's here, people are excited about going out, it's bustling and it feels normal, but we're forgetting that most businesses have been able to rely on government subsidies that will dry up soon, and that debts will be called, and that the cold slow months are four months away."