Geoscapes, the brainchild of co-founders Kris Harvey and Trevor Lipton, is returning for a second series of special events.

Featuring guest chefs who prepare multi-course menus served up in transparent dining domes, the series runs from July 15 to Aug. 28. This time, Geoscapes has partnered with Snow Valley which is not only hosting the domes, but also a separate full-service patio and bar.

Geoscapes will highlight the food from eight chefs this summer. While there are some returning chefs from the previous event, including Shane Chartrand and Lindsay Porter, others are new to Geoscapes.

"We really wanted to represent Edmonton as best as possible," said Harvey. "We made sure we had representation from different communities and backgrounds, including women – we have amazing women chefs in Edmonton."

Chefs Mai Nguyen of Gourmai Dumplings and Eric Hanson (formerly of Prairie Noodle) are participating in Geoscapes for the first time; neither are currently working at restaurants, and Harvey is excited that guests will be able to enjoy their exclusive menus. Chefs Tony Le and Troy Griffith from Century Hospitality Group are also new additions and will be bringing their cuisine to the domed environment.

Harvey was also happy to invite Rub'd chef Calvin Tuefeld to the event. "We wanted to create opportunities for young chefs who are doing interesting things," said Harvey. "This event can also open doors for future generations (of chefs)."

Tickets for the event are $125 for adults, with a minimum of four people per dome. While Geoscapes did introduce the chance to purchase tickets for children at a discounted rate of $25, Harvey admits that the cost may exclude some diners. For this reason, Geoscapes worked with Snow Valley to create two more approachable outdoor experiences in Tito's Patio and Botanist Garden. 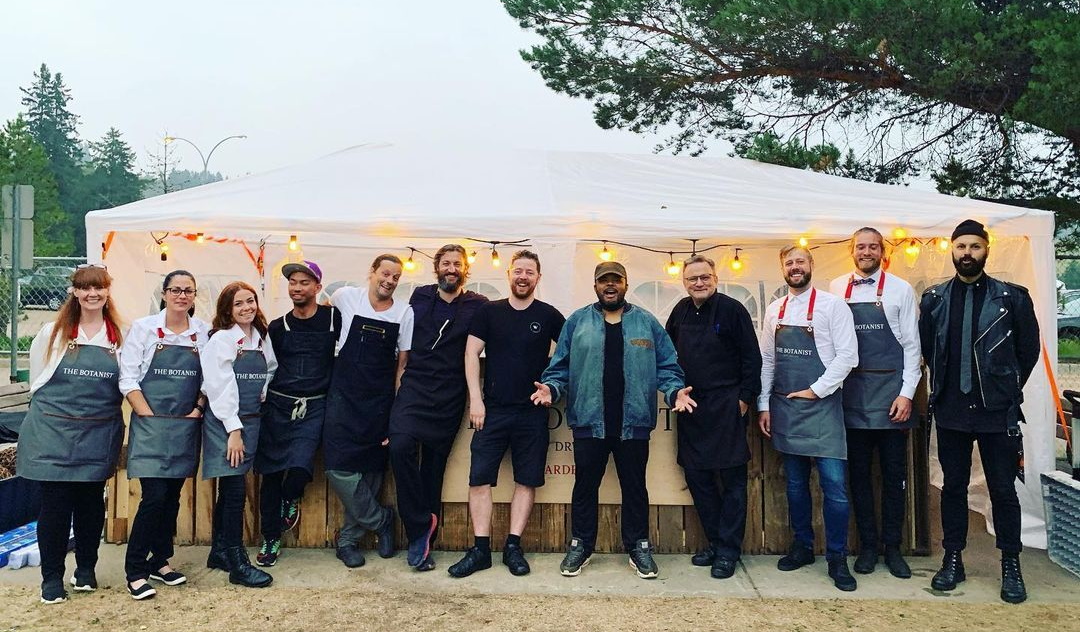 Chef Roger Mooking with some of the chefs participating in Geoscapes this summer. (Roger Mooking/Instagram)

Tito's Patio is led by Chef Kevin Ostapek (formerly of Prairie Noodle and Three Boars), and is promising a slice of Austin, Texas in Edmonton. "It's truly an accessible option," said Harvey. "You can get everything from hot dogs and burgers as well as amazing smoked brisket and pulled pork." Sweet tea and lemonade complete the southern experience.

Botanist Garden, on the other hand, aims to transport guests to a garden party with fresh spritzes and flower-filled planters. Both patios are open for walk-ins only from Thursday to Sunday, 12-8pm.

Back in March, Geoscapes was the latest iteration of domed dining opportunities to appear in Edmonton, similar to the set-ups offered at the Courtyard Marriot and Tiramisu Bistro, or during last year's Dining Under the Stars. Located then at Victoria Golf Course, the domes offered what many guests were looking for at the time – a safe way to dine out indoors.

"It was a huge success and was sold out almost every day of the week," Harvey told Taproot. "We created really safe [dining] opportunities, and people said they loved that we brought life to that dark corridor of the river valley."

It was also a boon to the hospitality professionals involved at a time when indoor dining was limited. "The chefs and businesses were doing double or triple capacity during that time period [because of Geoscapes]," said Harvey. "Over the six weeks, those businesses made over $150,000."

Given restrictions have been fully lifted as of July 1, and summer weather begets outdoor dining, some might be questioning the need to dine in a closed (albeit air-conditioned) dome. But Harvey insists that the personalized nature of Geoscapes is priceless.

"(The domes) give people the opportunity to create their own experience," said Harvey. "At a restaurant, the table next to you is a factor or the restaurant's music selection. Some people don't want others in their space."

In addition, unlike other domes that were imported, Geoscapes customized and manufactured their own structures locally. Harvey said the polycarbonate panels can hold 300 pounds of weight and can withstand wind gusts of up to 100 kilometres per hour.

Geoscapes is getting so much interest in the domes themselves from tourism boards and resorts abroad that they may be able to grow this aspect of their business as well, Harvey said. The first chef in this series, Edmonton ex-pat and Food Network Canada star chef Roger Mooking, has expressed excitement that Geoscapes might tour the country.

"We'll be looking for partnerships," said Harvey. "And we want to take our local chefs along, too and show the world how good they are."