Edmonton might be seeing a resurgence in wine bars. Darling, a wine bar focused on natural wines opened in July, while Culina shared the news that it will be re-opening the much loved Bibo later this year.

Darling is the brainchild of Justin and Derrick Jones. Justin is a veteran of the industry and is currently the general manager of hospitality at Biera. It was there that he was introduced to the idea of natural wines, as the restaurant wanted to ensure the drinks matched the quality of the food they were pairing.

"Natural wines involve no intervention," said Jones. "It's making wine but not messing with it."

Jones is passionate about sharing his love of natural wines, and so far, Darling's customers have run the spectrum from those eager to learn more to seasoned wine drinkers keen to see their inventory. "That's why it's fun," said Jones. "We are not pouring wine and walking away – we want to share the story of the winemaker."

Mass wine producers prioritize consistency above all else, Jones said, and as a result, add flavouring components, dye, or animal products to ensure bottles taste similar year over year. For Jones, the beauty of wine is to enjoy the nuances imparted by the inconsistencies of farming. "This really is not a new concept," said Jones. "It dates way back in Europe, but is now becoming a craze in Canada."

Justin and Derrick had been thinking about opening a permanent restaurant before the pandemic, but things were put on hold in 2020. However, they were approached by their friends, the owners of Take Care Cafe and Weekly Trim True, who asked if they wanted to test the waters in their space in the evenings. As a result, Darling is currently a pop-up and runs in the cafe and salon from Thursdays to Sundays from 7-11pm. There is indoor and outdoor seating, but Jones has a preference for the latter.

"The courtyard is the best part, with 32 seats in the back under the apple tree," said Jones. "It's a nice little oasis." 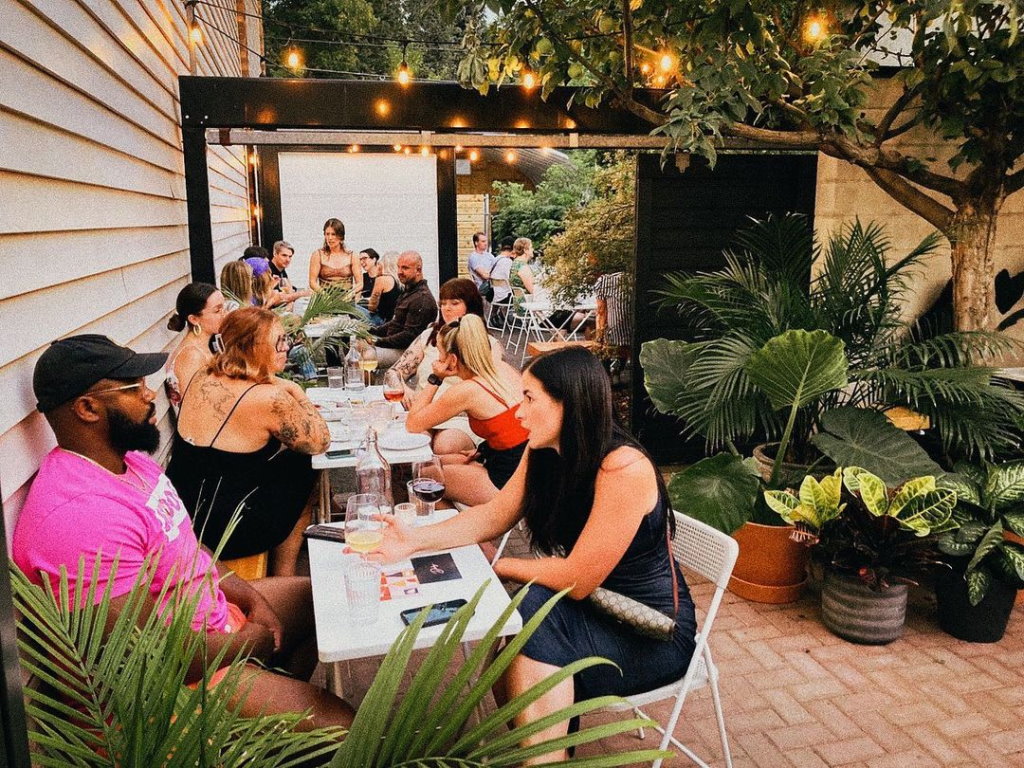 Food-wise, without proper ventilation in the current space, Darling is restricted from preparing hot foods. Still, Jones is happy about the curated menu of locally sourced items, which include breads from Brio Bakery and sustainable mussels from Prince Edward Island. "We don't have complicated items," said Jones. "Just high quality and tasty things to pair with wine."

Since Darling opened in July, the community has embraced the concept, and Jones is hoping to find a more permanent home before the snow flies, with the goal to have a full restaurant that offers natural wines. Born and raised in the Ritchie area, Jones hopes to secure a space in the same community.

Further west down Whyte Avenue is where Bibo will re-open as early as October (Bibo's Mill Creek location closed back in 2016). Owner Brad Lazarenko was approached by Beljan Development, developers of the Oliver Exchange Building which houses the Culina To Go location who wanted him to resurrect Bibo in the lobby of the Old Strathcona Hotel.

"We're working on the concept together," said Lazarenko. "They have a vision for an atrium lobby bar, with very open, high ceilings."

Lazarenko said the plan is for the space to be a café by day and wine bar at night. People shouldn't expect the same Bibo, however. "The aesthetic will be different," said Lazarenko. "It's not going to be the same menu."

He teased that Japanese street foods will make an appearance, along with cheese and charcuterie and the option of picking up some Culina To Go-inspired grab-and-go items. "It's not going to be a place to get big meals," said Lazarenko. "It will be a place you go before or after dinner."

For Lazarenko, this shift into Old Strathcona came as a surprise, but the opportunity to work with Beljan again was too good to pass up.

"Ten years ago I never would have come to Whyte Avenue, but the area is going through a renaissance," said Lazarenko. "It has a good energy about it, with good restaurants and lots of good food."

Back at Darling, Jones agrees that things seem to be building for the area, and he couldn't be happier to hear that Bibo will join their neck of the woods soon.

"It's amazing because I remember going to Bibo right before it closed," said Jones. "It was the coolest place with a really smart sommelier who poured me the perfect glass of wine. It's time to bring back the wine on Whyte Avenue!"