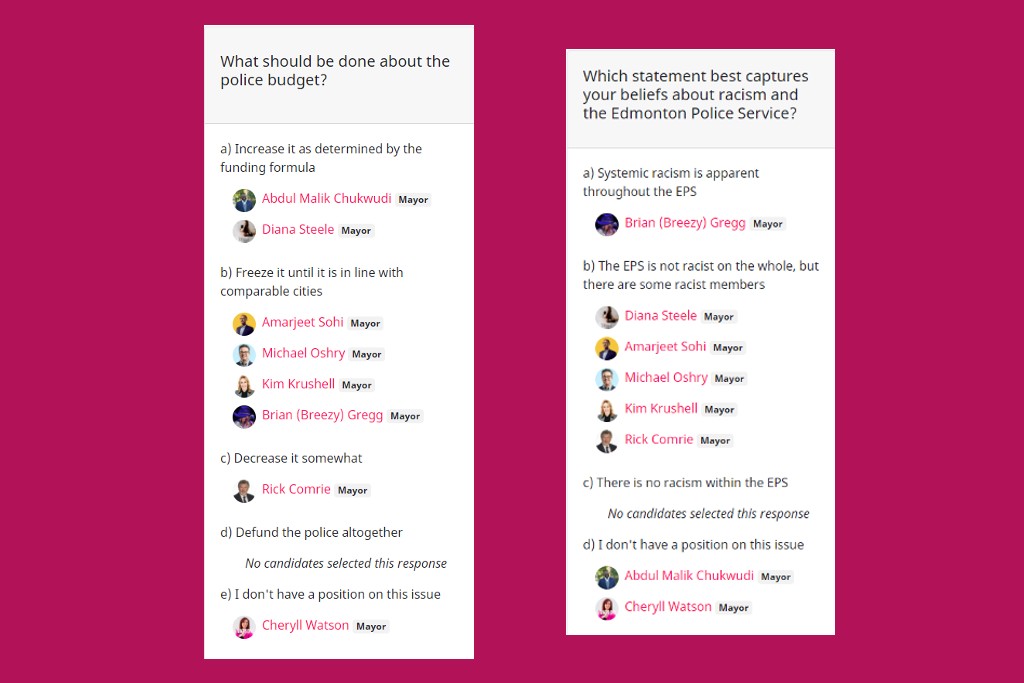 A recommendation to freeze the Edmonton Police Service's $450-million budget has the support of 26 of the candidates seeking election on Oct. 18, including four mayoral candidates, according to a Taproot Survey question.

But the incumbents seeking re-election are either in favour of increasing the police budget according to the current funding formula, or they chose not to answer.

Edmontonians who participated in Taproot's People's Agenda project were clear that examining police funding was important to them, particularly in light of the public hearings into racism and policing that led to the creation of the Community Safety and Well-Being Task Force.

The task force identified a number of longstanding problems that it attributed to systemic racism and discrimination, and it made 14 recommendations to deal with them. Thirteen were unanimously approved by council earlier this year.

But the 14th recommendation — that funding be brought in line with comparable cities and a portion tied to specific performance, with a further suggestion to reinvest the savings into social services and "other community safety ecosystem needs" — was sidelined by a request for further data from city administration. Mayor Don Iveson was reluctant to accept that recommendation, saying "this council cannot make financial decisions for the next council."

Administration is expected to report back in the first quarter of 2022. 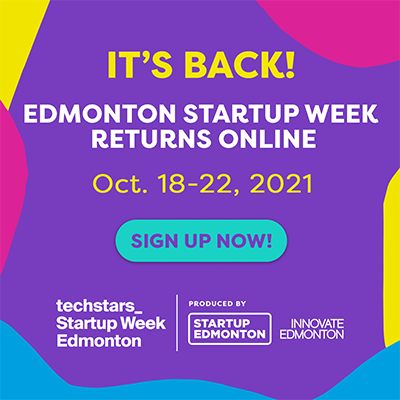 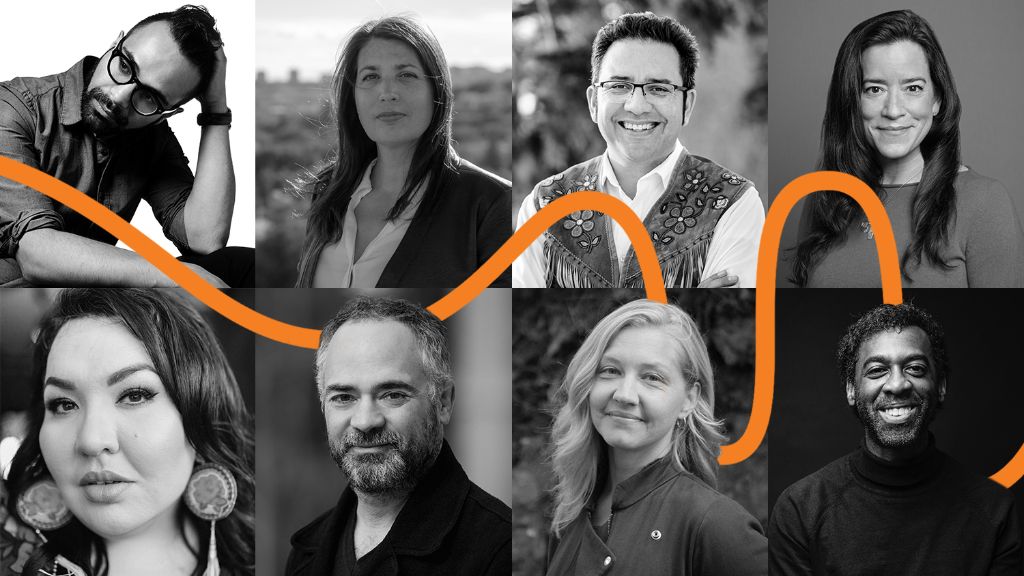 Trying to plan for anything live during the pandemic seems like a herculean feat — but Edmonton's non-fiction literary festival is cautiously going forward, balancing access with safety.

"It's a bit wild," Fawnda Mithrush, Litfest's executive director, told Taproot. "All I really want to do is curl up with a pile of books and not have to think about the next government press conference."

Mithrush is carefully forging ahead with this year's festival, which happens to mark Litfest's 15th anniversary. It will feature 21 events with both online and in-person offerings between Oct. 14-24. Metro Cinema will host the festival's opening night, featuring the Edmonton launch of Omar Mouallem's Praying To The West and screening of his burger-chain documentary The Last Baron.

Other popular yearly Litfest events, like Writers' Brunch and The Memoir Hour, will happen virtually. There are also masterclasses, poetry panels, and plenty of other offerings over the festival's 10-day run.

Last year's Litfest was a completely online experience, and Mithrush notes the festival is looking to maintain some of that online presence, even as in-person events re-enter the picture.

"We learned a lot in terms of accessibility and reach with the online events last year," Mithrush says. "We're trying to preserve the positive aspects of those lessons while making sure what happens in-person is safe and accessible, too." 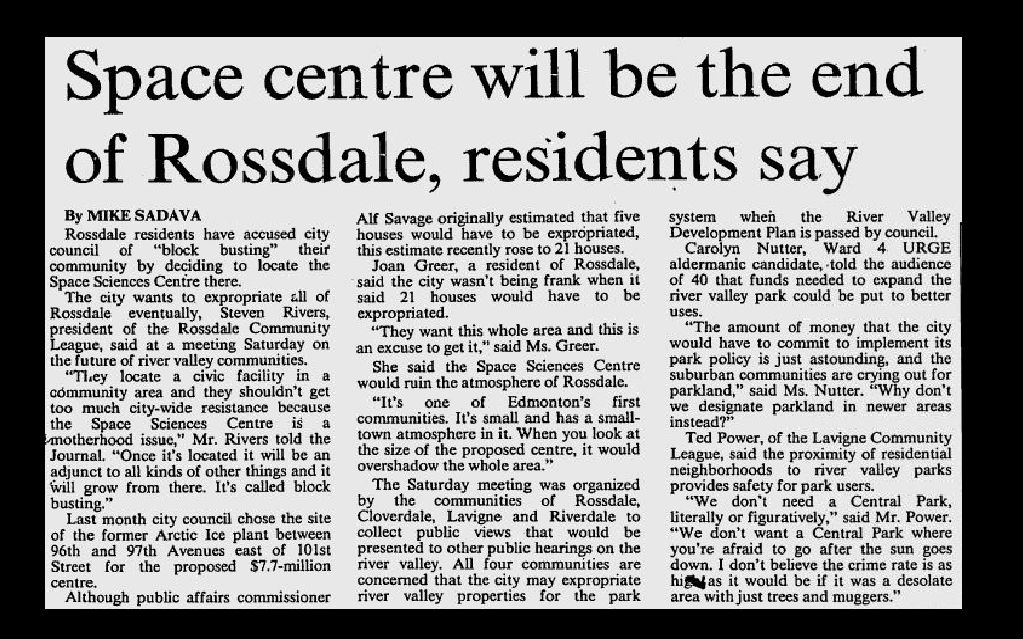 On this day in 1980, Rossdale residents were saying a new space science centre would be "the end" of their neighbourhood.

The city wanted to replace the Queen Elizabeth II Planetarium, the first of its kind in Canada, because its 64-person capacity was deemed too small. Although the city originally estimated it would need to expropriate four residences to build the science centre in Rossdale, that estimate later jumped up to 21 homes. That enraged some Rossdale residents, who accused the city of "block busting" and claimed it would be the first step in replacing all of Rossdale's houses with civic buildings.

Whether or not that was the plan, the residents of Rossdale got the city to back down. Instead, the new science centre was built in Coronation Park, right beside the planetarium it was to replace. The building's futuristic design was created by the famed Douglas Cardinal and completed in 1984.

When it opened, the centre boasted a 250-seat dome theatre, the first IMAX theatre in Western Canada, as well as numerous exhibition spaces and other attractions. It soon proved to be a popular destination in the city, drawing in hundreds of thousands of visitors each year.

A decade after its initial opening, the centre expanded to add more gallery space, a cafe and a new theatre entry. Another $14 million expansion was completed in 2001 when the facility was given a new, harder-to-spell name: The Odyssium. The new name did not last long, however — four years later, it was changed again to the TELUS World of Science due to a partnership between the city and the communications company.

Forty years after it was first built, the science centre hasn't finished changing. It is currently undergoing one of its largest renovations yet. The $41 million Aurora Project, designed by Edmonton architect Donna Claire, will renovate the existing centre, add 20,000 square feet of indoor space as well as outdoor areas showcasing Indigenous science programming.

The Queen Elizabeth II Planetarium is also undergoing extensive changes after being closed for nearly four decades. The "Crown Jewel of Coronation Park" is being renovated and reopened, where it will serve as a public gathering area as well as a programming space for the science centre. 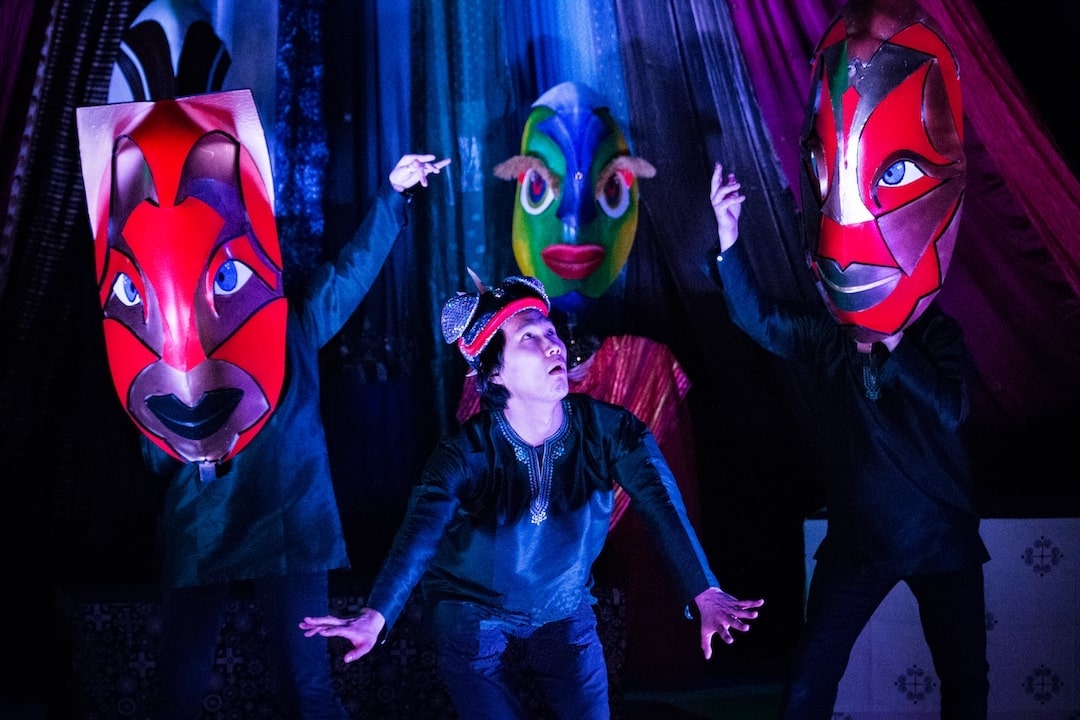