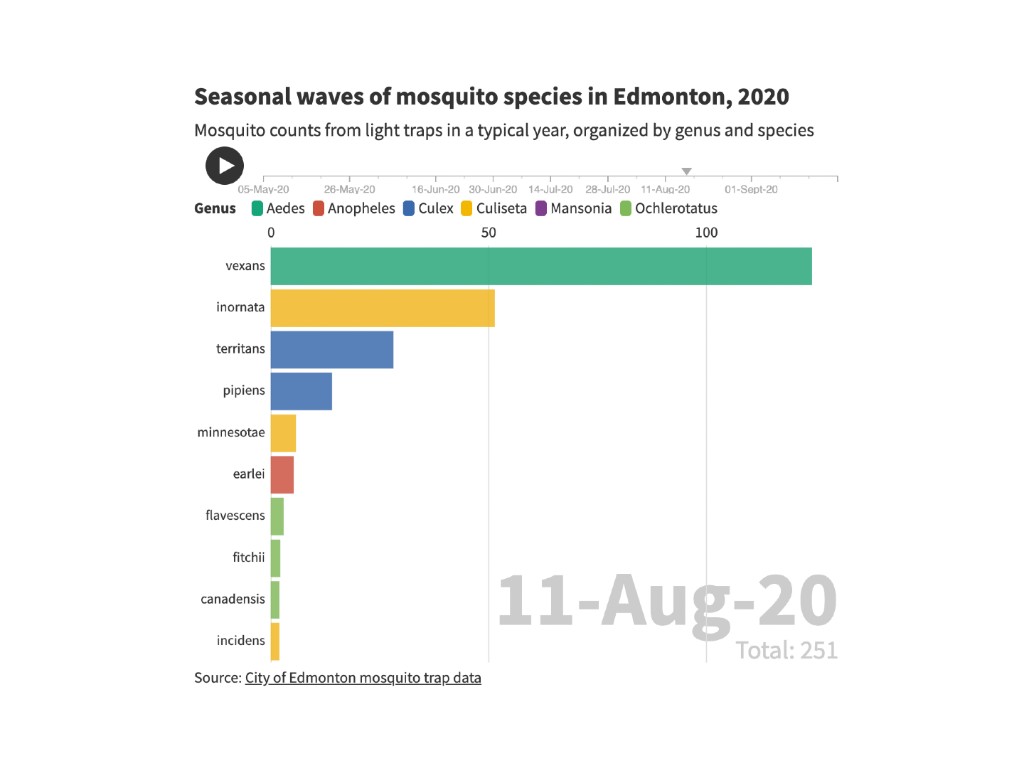 Data shows the ebb and flow of mosquito season

You've probably never swatted a mosquito and stopped to ask yourself if it was a Culex or an Ochlerotatus, but that is one of the considerations guiding Edmonton's ever evolving pest control program.

There are dozens of mosquito species in the region, hatching in waves over the course of the summer. Some, like the complex of species that develop in cold-water environments in early spring, are often naturally limited to one generation a year. Others, like the Culex subspecies, are the most common carriers of the West Nile virus, though that is fortunately less of an issue this far north.

The most bloodthirsty and populous varieties that breed in the warm months and ruin your summer outings are the main concern of the city's pest department.

"When we start seeing Ochlerotatus dorsalis and Ochlerotatus spencerii, those are spring developers, and they're also quite aggressive daytime biters," said the city's pest management coordinator, Mike Jenkins. "When they show up, that gives us a warning that those species are developing. And so, we can target our programs to look for the larval development, and to concentrate our efforts on the sort of sites where those species are developing."

The pest control teams gather weekly data from sources such as light traps placed around the city, weather forecasts, and observations of larvae growing in standing water. From that, they make projections and determine their response, meaning their approach is constantly being adjusted. For the past few years, the city has also been incorporating carbon dioxide bait traps that mimic human scents to supplement the data gleaned from the light traps.

"They're more effective. They draw in all the species that we're looking for, not just the ones that get attracted to the light," Jenkins said. Unlike light traps, the BG-Sentinel carbon dioxide traps can also be used during the day, when some of the most aggressive biting species are active. 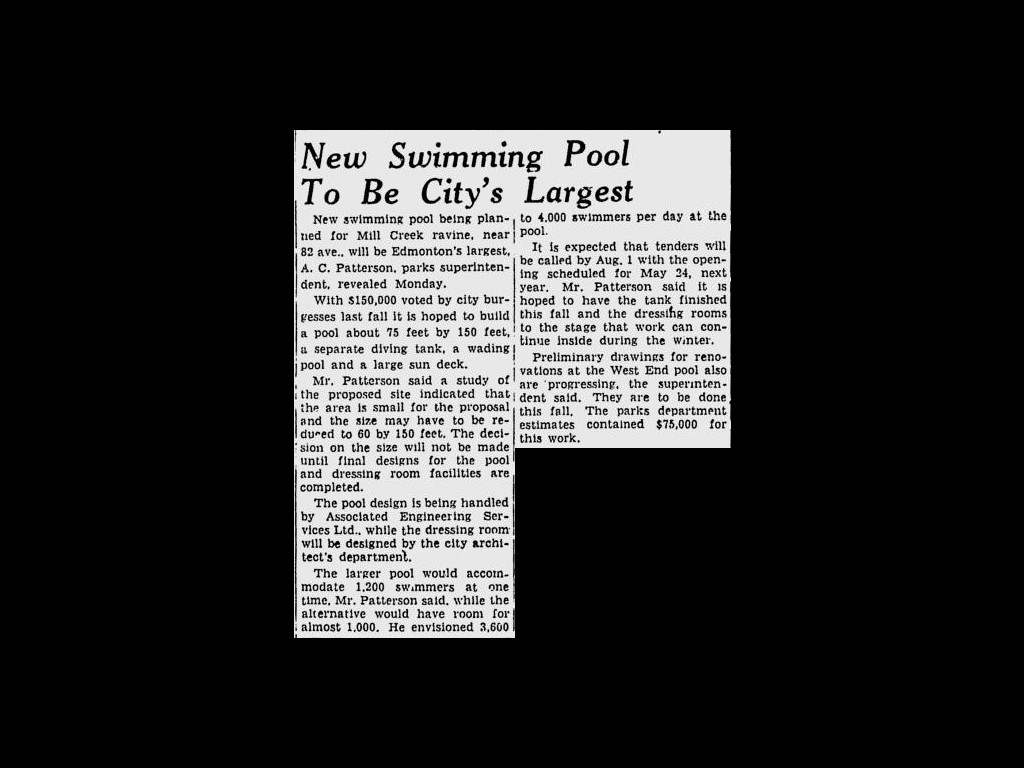 On this day in 1953, the city was planning to build the largest outdoor pool in Edmonton.

The proposed $150,000 project in the Mill Creek Ravine would create a large central pool and "a separate diving tank, a wading pool and a large sundeck," the Edmonton Journal noted at the time. But Mill Creek's connection with swimming in the city goes back far longer than the 1950s.

In the early 20th century, there were not that many options for Edmontonians to swim. Ponds and lakes around the town were deemed unsuitable for bathing or swimming, and "the river, as past experience has proven, is very dangerous," a special committee noted. In 1917, a makeshift pool was temporarily created by damming up Mill Creek. However, it was evident that a more permanent option was needed.

On the hottest day of the year in 1922, the city opened the first municipal pool in western Canada, in Riverside Park, south of the river. It would later be renamed the Queen Elizabeth Pool in 1939. The opening of the pool proved to be extremely popular, so much so that the city almost immediately began planning two more. In 1924, the city opened the East End Pool in Borden Park and the West End Pool in Oliver.

That summer, two pools became the focal point for racial tension in the city. In July, a young Black boy was refused admission to the East End Pool. A month later, when two Black citizens entered the Oliver Pool, every white swimmer left the facility in protest. A year earlier, the city commissioners had put in a rule barring Black Edmontonians from using public pools.

The young boy's mother and a group of other Black residents wrote a letter to the city commissioner, who upheld the order. They then appealed to the city council, arguing that they deserved the same access to civic facilities as any other taxpayer. Eventually, city council rescinded the order (which prompted city commissioner Christopher Yorath to resign). That didn't fully clear up the issue, however — Borden Park's pool was under the control of the Edmonton Exhibition Association, and it still refused to allow mixed bathing.

In the 1980s, the city planned to close the aging Queen Elizabeth Pool, but public outcry kept the beloved facility open for another couple of decades. Finally, in 2004, the deteriorating condition of the pool led to its closure, and a new Queen Elizabeth Pool was opened at the nearby Kinsmen Sports Centre. In 2018, Edmonton once again snagged another pool "first" when it opened Canada's first natural swimming pool in Borden Park, which uses sand, gravel, and aquatic plants to clean the water instead of chemicals.

Edmonton's already-short outdoor pool season will be even shorter this year. The city won't open its outdoor pools until July 1, a decision that was made in 2020 due to budget pressures, though the Queen E once again got a reprieve and is slated to open on June 22. Mill Creek Ravine's pool will not be opening at all, however. It is undergoing rehabilitation and remains closed until further notice.