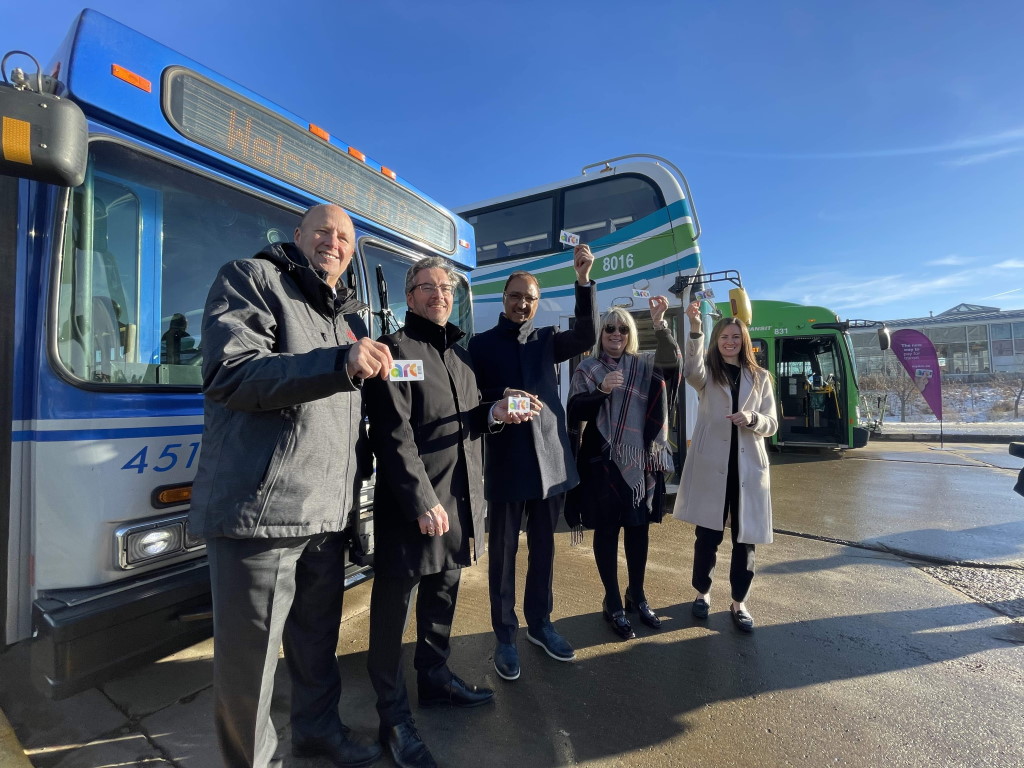 Electronic fare payments come to transit in the Edmonton region

Transit riders in the Edmonton region can now use Arc, the new electronic fare payment system that has been in the works for nearly two decades.

Arc is available for use by standard adult riders in Beaumont, Edmonton, Spruce Grove, Strathcona County, and St. Albert. Fort Saskatchewan and the City of Leduc require more time for implementation due to bus replacements and the need for handheld fare validators on the fleet, so they will launch support for Arc next year. Also coming in 2023 is support for discounted fare groups — including seniors, youth, and low-income individuals — and riders who use paratransit services such as DATS.

"This is an important milestone toward building a strong, integrated transit service that gives people a more modern, reliable, and seamless way to travel around the greater Edmonton region," said Carrie Hotton-MacDonald, branch manager of Edmonton Transit Service.

Wade Coombs, transit director of Strathcona County Transit, said Arc makes the Edmonton region the first in Canada to offer regional fare capping. "This will enhance regional mobility and reduce the financial barrier for riders who prefer not to pay for a pass upfront," he said.

Fare capping is one of the key features of Arc, intended to replace monthly passes. Once a rider hits the fare cap for their region, they ride for free during the rest of the month. Each region has a slightly different cap, ranging from $52.50 per month in Fort Saskatchewan to $100 per month in Edmonton for local adult riders. Commuter caps are higher, ranging from $85 per month in Beaumont to $135 per month in Spruce Grove.

Though seven regional municipalities are involved in Arc, the initiative is separate from the Edmonton Metropolitan Transit Services Commission.

"Arc has a governance structure with members, including a regional executive steering committee, to oversee the implementation," Hotton-MacDonald told Taproot. "Faring is not in scope for the Commission's first phase of operations." She said the EMTSC will work with municipalities on faring in "future phases of work."

Edmonton city council is expected to vote on its involvement in EMTSC's first phase of operations during the 2023-2026 budget discussions.

Staff and outreach teams from the participating transit agencies are handing out complimentary Arc cards to riders at transit centres and LRT stations until supplies last. Arc cards can also be purchased for $6 online, at fare vending machines, and at select retailers. 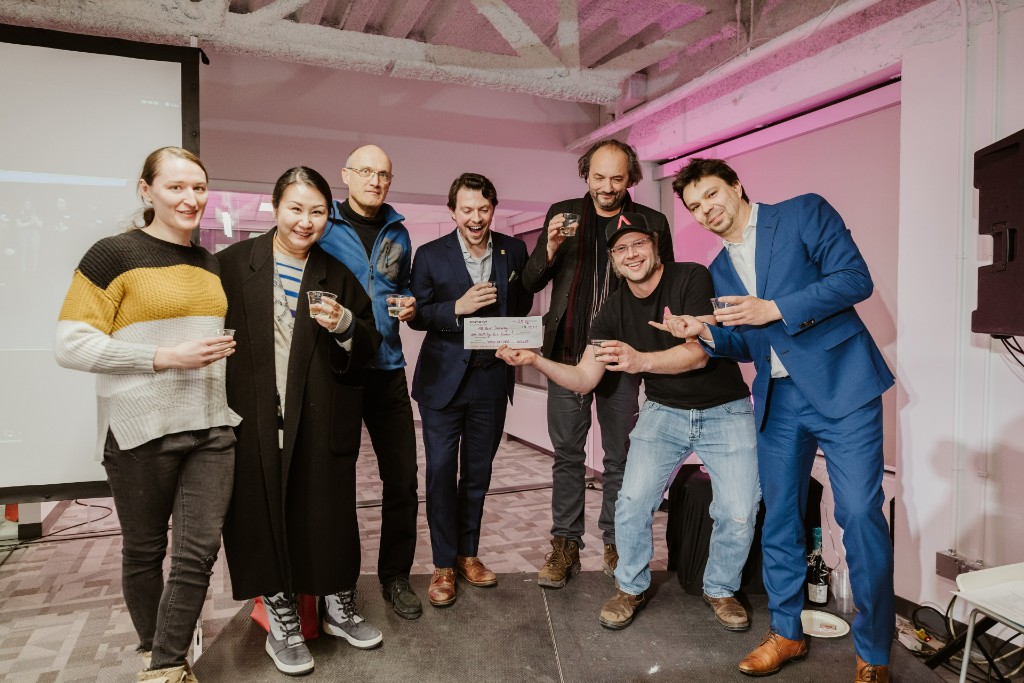 Biotech company 48Hour Discovery, which won the Edmonton side of Startup TNT's Investment Summit VI, is looking to raise a $2.5-million seed round to help it "pre-discover" 250 protein targets.

Finding the targeting molecules that will bind to the receptor in, say, a cancer cell, is key to developing therapeutic treatments in precision medicine. Once 48Hour Discovery identifies 250 such targets, "that's when we expect a dramatic increase in value," CEO and founder Ratmir Derda said in his pitch at the summit finale on Nov. 17.

Each target has $100,000 to $500,000 in unrealized value that will take two or three years to come to fruition, Derda said. Investors at Startup TNT seemed willing to wait, committing at least $175,000 to kick off the company's seed round, though Taproot has not been able to confirm the final amount.

Derda's company has earned about $5 million in revenue over the past five years, half of it this year, he said during his pitch. That's based on the discovery of 33 targets; now 48Hour Discovery wants to add 250, "and for that, we need a little bit of money."

A $2.5-million seed round would help 48Hour Discovery achieve economies of scale in its target discovery. It would also allow it to advance its own pipeline of drug discovery, including a4b7, which may lead to a treatment for inflammatory bowel disease.

"These types of solutions are no longer a dream," Derda said, citing as proof Lutathera, an FDA-approved drug to target gastroenteropancreatic neuroendocrine tumours, which was acquired by Novartis for $3.9 billion.

The challenge now is to find more such solutions, which 48Hour Discovery does "much faster than our competitors at a dramatically reduced cost," said Derda, who received an award for scientific achievement and innovation from BioAlberta earlier this year. 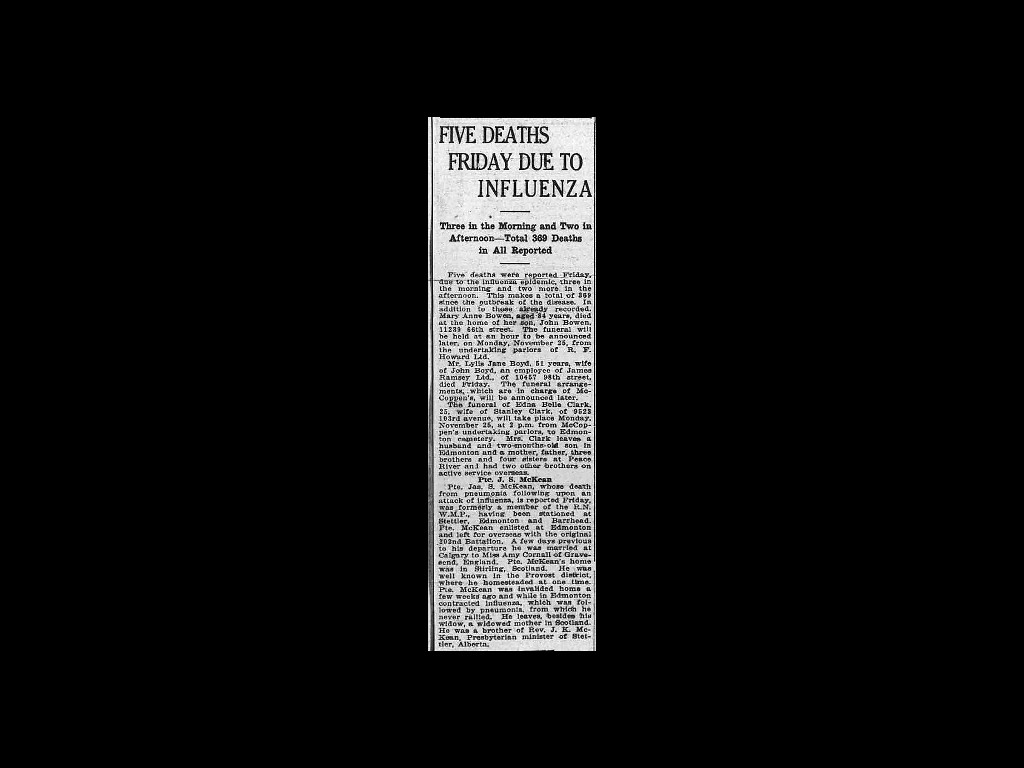 On this day in 1918, Edmonton was in the grips of a deadly influenza pandemic.

The first reported Alberta cases of what was erroneously dubbed Spanish flu were linked to a train passing through Calgary on Oct. 2, 1918. When the virus reached Edmonton, it spread quickly. By Oct. 19, at least 40 people were infected, with more than a dozen in quarantine.

The pandemic came at a crucial time. Doctors and nurses were already in short supply, as many were involved in the war effort. Alberta's government had only existed for a touch over 13 years, but it moved quickly to bring in measures to slow the spread of the flu. Schools, churches, and other gathering places were ordered closed. Mask mandates were put into place, both indoors and out.

Edmontonians seemed much more resistant to mask-wearing than those living in Calgary. Eventually, the city's entire police force was put at the disposal of Minister of Municipal Affairs Alexander McKay, who directed them to arrest those breaking the mandate. Among those prosecuted for refusing to wear a mask was the president of Edmonton's health board. (McKay would become Alberta's health minister before dying of complications related to the flu.)

Despite these measures, the virus spread. Hospitals were soon overwhelmed. The University of Alberta's Pembina Hall was converted into a temporary hospital, housing hundreds of patients. With few resources and little understanding of the virus, panicked people turned to anything that could promise to keep the virus at bay, no matter how outlandish. Advertisements began touting cures made from fruit extracts, menthol, or compounds purchased from taxidermists. One recommendation even suggested leaving warm formaldehyde on the stove to avoid getting sick.

But amid the panic, there was also compassion. With so many severely ill or in quarantine, some families struggled with child care, cooking, or laundry. Volunteer workers began caring for their neighbours' needs, while volunteer nurses cared for the sick. Soon, the mayor and other city leaders devised a plan to split the city into 15 "relief districts". Each district was headquartered in a then-closed school, which served as a place to store supplies, take donations, and coordinate volunteers.

Flu cases began to drop in November 1918. By December, the province lifted its ban on public gatherings. By May 1919, there were no longer any reported cases. The following two winters saw more outbreaks, but nothing near the scale the city saw in the closing months of 1918. By the end of the pandemic, more than 600 Edmontonians had died of influenza.

Much of what happened in 1918 will seem similar to modern Edmontonians, still dealing with the impacts of the COVID-19 pandemic. And influenza still remains a serious cause for concern in Alberta — this year's flu season has been more intense than most, with hospitalization rates climbing rapidly. Schools are once again a focus. The Edmonton Public School Board held an emergency meeting on Nov. 15 after more than 20,000 students were absent due to COVID, influenza, and respiratory syncytial virus.