Most votes at city council are procedural and can seem mundane, but there are some decisions that city councillors seem to want to share more widely. In the era of social media, doing so has never been easier.

Decisions that are broadcast on platforms like Twitter and Facebook are often shared in a visual way, reflecting the way social media as a whole has evolved. Increasingly though, city councillors are putting their own branding on the visuals they share. Four city councillors spoke to Taproot about their approach.

Causing hardship for #yegtransit users for the sake of a quarter does not create a sustainable transit system.

An example of a tweet containing a branded graphic, from Coun. Aaron Paquette.

"Often I have a lot more to say than can easily be shared on a single image," said Coun. Andrew Knack. "I believe that much of what we do requires additional context so I'll write out longer posts or Twitter threads."

While Knack said he enjoys seeing his colleagues create their own graphics and branding, and feels that "any way that we can more easily share what is happening at city hall is a good thing," he doesn't use the practice himself and worries about misinformation.

"I think it's critical for anyone who is looking to share information in an easy-to-read way to ensure they are still providing accurate information," he said.

"My constituents want to know what council decided, what my vote was, and why I voted the way I did," he said. "Properly communicating on each of these elements is challenging at times."

Cartmell said he has moved away from creating graphics for council votes and decisions, "for fear of inadvertently creating a misleading graphic."

Thank you to those who reached out in support of my motion & my fellow Council colleagues for supporting this common-sense approach.#yegcc #yeg https://t.co/0eZlj5NOaB pic.twitter.com/djDEOtg6gj

Another example of a tweet containing a branded graphic, from Coun. Tim Cartmell.

Conversely, combatting misinformation is what prompted Coun. Aaron Paquette to adopt the practice of creating his own graphics.

"Council stuff is so obtuse in some ways," he said. "It can be easy to spin it."

Paquette said he noticed that photos are often shared beyond the place they're initially posted, so he began using his own branding to help people identify where it came from.

"It's about accountability," he said. "Showing that it really did come from me."

Neill Fitzpatrick, assistant professor of journalism and communications at MacEwan University, told Taproot he's not surprised by the approach.

"Trust in media is way down and people increasingly don't get their news from traditional sources," he said. "It's just the way things are going."

But Fitzpatrick cautioned that just because a message is coming directly from a councillor doesn't necessarily mean it's accurate.

"The message is getting out there, but it is unfiltered and we can't always guarantee it is true," he said. "There's definitely still a need for an intermediary, for journalists to say, 'Let's check that out and make sure that's accurate.'"

"My team did a cross-analysis of some of the more popular social media for different elected officials," he said. "Those that tended to have more consistent style and branding had a larger reach."

Dziadyk said that broadening his online reach would help him better connect with constituents to "understand what is important to them."

Cartmell does use a common brand when posting about his engagement efforts and said he'll continue to do so, for reasons similar to Dziadyk.

"Constituent input is extremely important to me, and I want to make these conversations widely available and worthwhile to people," he said.

Fitzpatrick said while the branding isn't necessary, it does look attractive.

"As you're scrolling through it does kind of catch your eye," he said. "It might make people stop scrolling and take a closer look at what you're doing."

However, there's "a fine line between publicizing and campaigning," Fitzpatrick said. 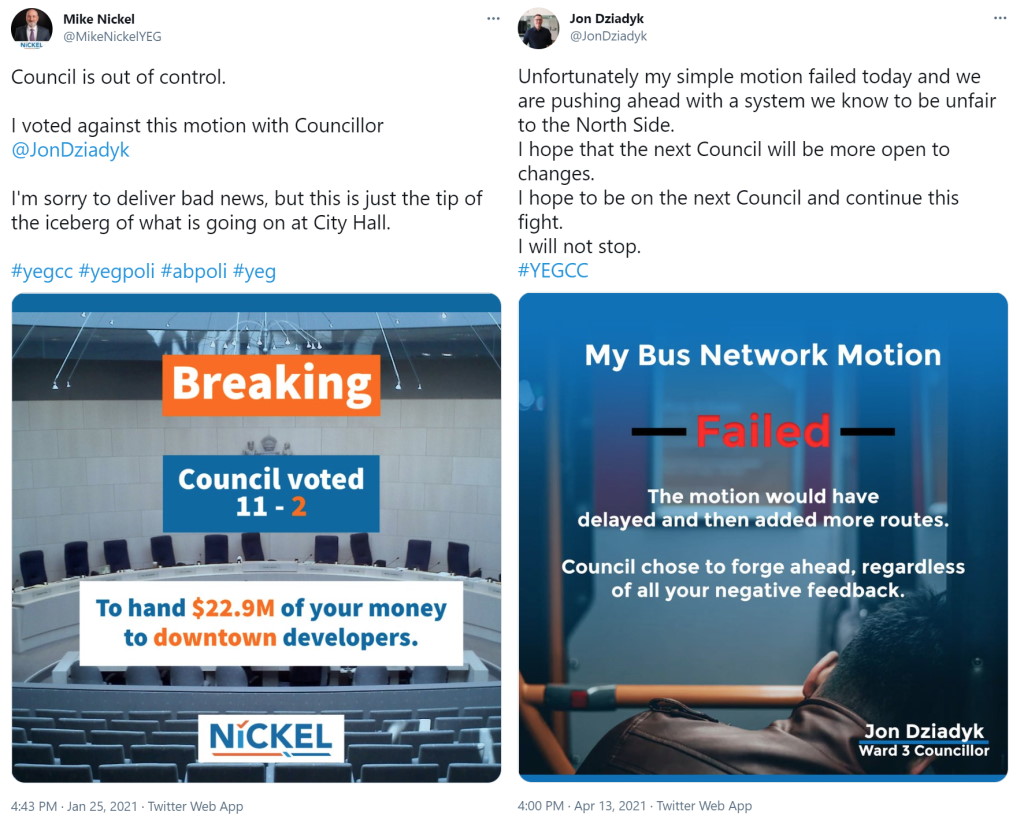 Coun. Mike Nickel, who did not respond to a request for comment, often shares branded graphics about council votes, increasingly as part of his campaign for mayor. Dziadyk is also using the graphics as part of his re-election efforts.

"When people do it for campaign purposes, you're getting into some murky waters," Paquette said, indicating he wouldn't be adding Ward Dene to his graphics unless re-elected.

Raising the level of discourse

In addition to being potentially confusing, campaign-related graphics tend to be more combative.

In February, city council unanimously rejected a proposed social media policy that would have addressed a number of issues including misinformation and disrespectful behaviour.

In an interview with Taproot's Speaking Municipally following the decision, Coun. Sarah Hamilton spoke about the rudeness she has experienced regularly on social media and suggested the municipal election could serve as a referendum on how councillors approach social media.

"I hope we are seeing a return to leadership with integrity, and that that comes out in the electoral process," she said.

Without rules in place however, Edmontonians could see more councillors adopt a "Trump-lite" approach, Fitzpatrick warned.

"If it is successful for one, others will match it," he said.

Cartmell said he's careful to avoid misrepresenting his colleagues online and doesn't mention them by name unless acknowledging or attributing their effort.

"That some in this realm don't share what I think are basic tenets of mature, respectful dialogue is disappointing, and disheartening," Cartmell said.