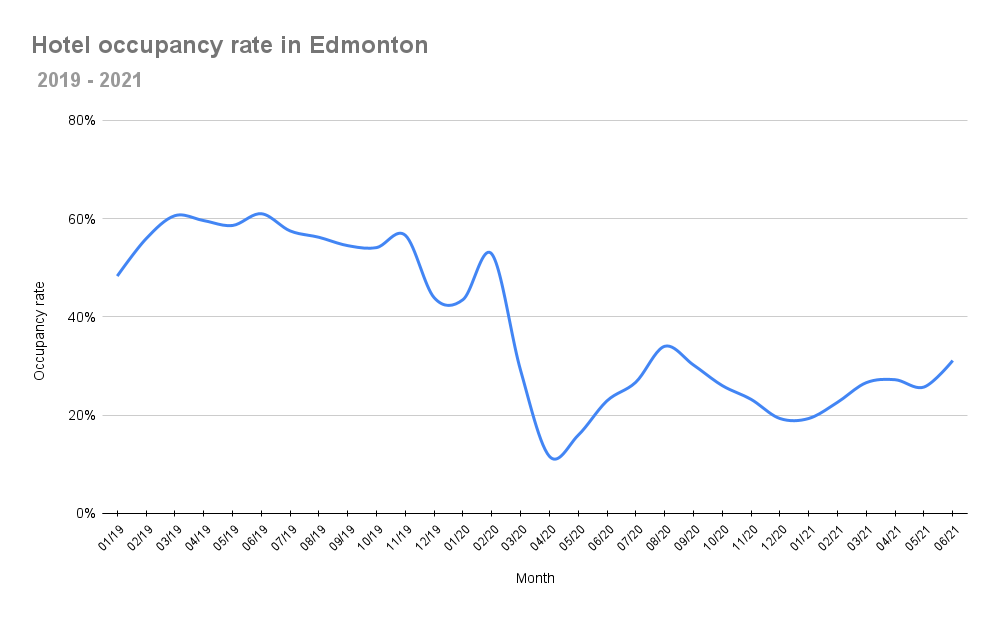 Visitors are booking more hotel rooms in Edmonton this year, but the industry has a long way to go to get back to pre-pandemic levels, according to data from the Alberta government.

For most of 2019, the occupancy rate for hotels in the city hovered around 55-60% — a pretty standard number when compared to hotels around the world. And it's no surprise that occupancy rates cratered when the pandemic began during the spring of 2020, as travel restrictions and other measures were put in place to slow the spread of COVID-19.

The hotel occupancy rate in the city has made a slow climb upwards since then, but more than a year after the first crash, it's still only about half of what it was before.

This comes at a time when Edmonton is working towards defining the long-term future of tourism in the city. Earlier this summer, Explore Edmonton released its Tourism Master Plan, which considers the city's current tourist market and provides a road map for how to increase it over the next decade. The plan puts an emphasis on highlighting natural spaces, particularly the river valley, for potential visitors. Other goals include supporting festivals, culinary tourism, and more Indigenous history and heritage to attract visitors.

The city also recently became the first in Western Canada to sign on to the Global Destination Sustainability Index, a ranking of environmentally sustainable tourist destinations. Explore Edmonton hopes the move will not only be a boon to the city's hospitality industry but also push it closer to its larger environmental goals.

However, even with the master plan and new initiatives in place, it is likely to be a long journey back to normal for Edmonton's hotel industry. Explore Edmonton predicts tourist spending won't return to pre-pandemic levels until 2026.