The devastating effects of climate change have become more clear than ever over the past few years, urging Edmonton and other cities around the world to aggressively curb their carbon emissions.

In April 2021, city council approved a plan with an ambitious idea — what if Edmonton budgeted for carbon emissions the same way it handles its money?

What is a carbon budget?

While the specifics can vary, the basic idea of a carbon budget is similar to how the city has a financial budget. Council has a set amount of money in the city coffers and a variety of areas to spend it, so it has to prioritize what is most important with its limited funds.

With a carbon budget, the city has a certain amount of carbon to "spend" if it wants to do its part to reduce the impacts of climate change. However, unlike a financial budget where there may be opportunities to bring in more money, the carbon budget remains static — it is the total net carbon the city can emit.

"You can think of a carbon budget ... as a bathtub filling up with water," said Harmalkit Rai, Edmonton's director of budget planning and development.

"The bathtub can only fill up with so much water before it overflows. This signifies the carbon budget."

Why is Edmonton doing this?

Edmonton hosted the Cities and Climate Change Science Conference in 2018, which brought mayors from around the world together to discuss the role of cities in fighting climate change.

As part of that conference, the Edmonton Declaration was created — a recognition that cities will be impacted by the effects of climate change, and how they can be instrumental in fighting it.

The declaration includes a pledge for cities to do what they can to keep the Earth's temperature from rising more than 1.5 degrees C — a target outlined in the 2015 Paris Agreement, which is considered to be the limit the planet can warm before the climate-related risks become even more severe.

The declaration has been signed by mayors and municipal leaders from across the world. To meet its commitments, city council has committed to making Edmonton carbon neutral by 2050.

How feasible is it for Edmonton to reach that goal?

It's a pretty ambitious target, especially given that Edmonton is a carbon-heavy city, with the highest emissions per capita of any Canadian municipality. Edmontonians crank up the heat during the city's cold winters, many drive, plus the majority of the city's electricity is generated from emissions-heavy resources like coal and natural gas.

The Community Energy Transition Strategy lays out the ways the city plans to address its emissions, including expanding its solar power rebate program and converting its transit system to completely low-emission vehicles.

But one of the most important parts of the plan is creating a carbon budget and using carbon accounting to stay within it. 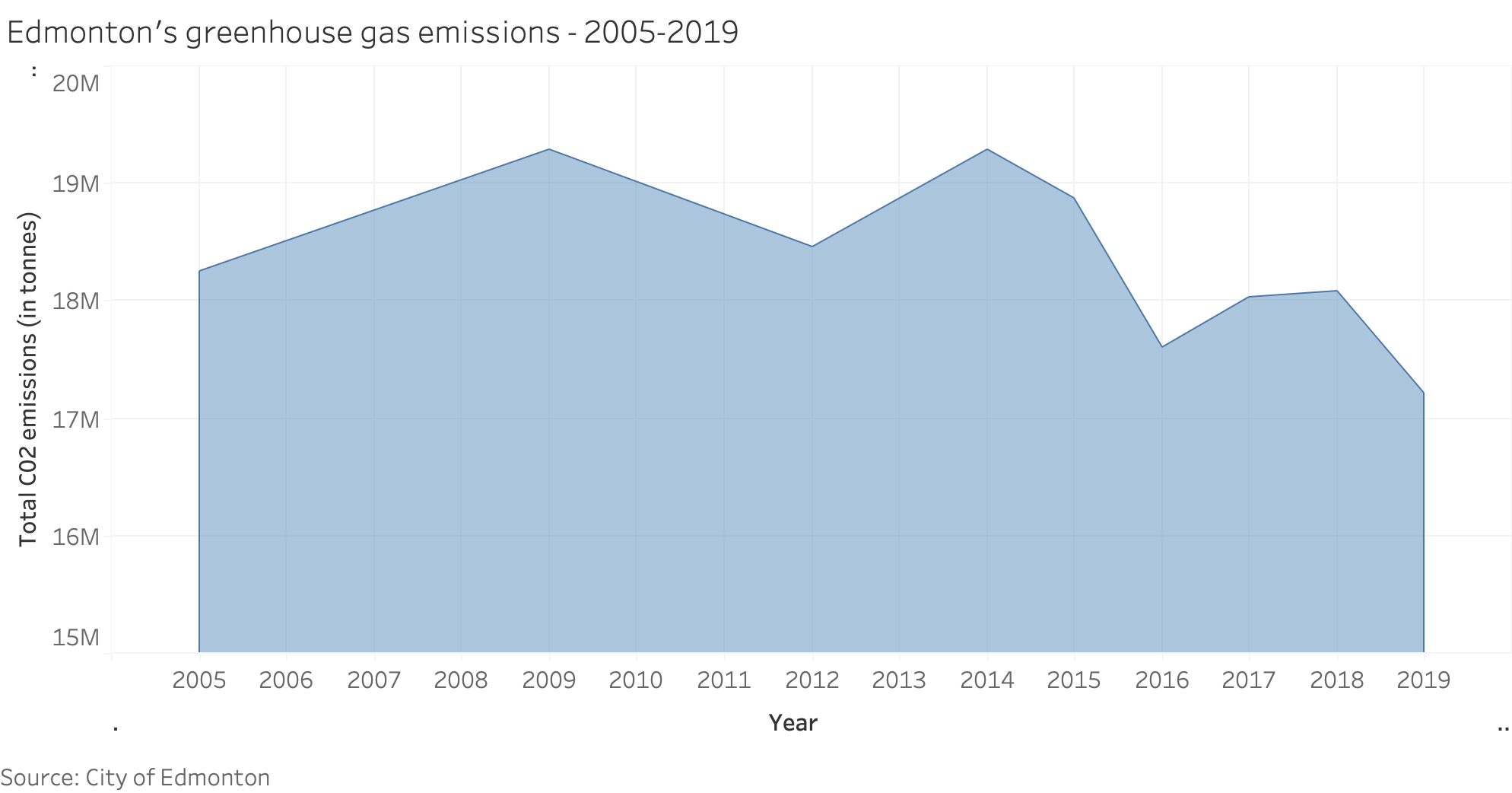 Edmonton has succeeded in lowering its C02 emissions over the past few years, but an even more drastic reduction is needed to hit the goals it has set out for 2030 and 2050. (Scott Lilwall/Edmonton Open Data Catalogue)

What is the city's carbon accounting framework?

"Carbon accounting helps us make decisions so that we don't overfill the bathtub and also find ways to start draining water from the tub," Rai said.

It's one thing to set a carbon budget — it's another to stick to it. Part of the challenge is that carbon budgets stretch over a long period, or a full generation, in Edmonton's case. It can be challenging to keep in mind that the goals of a carbon budget are decades away when dealing with decisions today.

But that's the point of the carbon accounting framework: to make sure that decision-makers are aware of the impacts today's choices will make years from now. Similar to how city councillors and planners receive information about how much a project will cost in dollars, they'll now receive a similar breakdown of its estimated carbon price tag.

For example, if the city wants to create a new pedestrian bridge, part of the process will be to determine how much it would cost to build and maintain. Under the carbon accounting framework, alongside that information will be a breakdown of whether the project would reduce or increase carbon emissions, by how much, and what impact it would have on the city's carbon budget. With the broad strokes of the framework decided, the city will be setting up a Carbon Budget Office to manage the process. The aim is to get the logistics and fine details worked out in time to introduce the full framework in late 2022.

How big is Edmonton's carbon budget?

To hit its commitments, Edmonton can only produce 135 megatonnes of net carbon by 2050.

In 2019, Edmonton produced approximately 18 megatonnes. If the city doesn't make any changes, based on current use it is estimated that it will blow through that budget by 2028.

Another way to look at it is on a per capita basis. To hit Edmonton's carbon budget, net emissions need to be reduced to approximately 3.2 tonnes per person by 2030. And by 2050, it'll have to achieve carbon neutrality, meaning that any carbon emissions by the city will need be matched by pulling the same amount out of the atmosphere or purchasing carbon offsets.

In 2019, Edmonton's per capita carbon emissions came out to about 19.1 tonnes per person. That's down from 25.6 tonnes per person in 2006. But it still makes Edmonton one of the highest emitters per capita in the country and nowhere near where it needs to be to stay on budget.

How will city council figure out the carbon cost of projects it considers?

The process of attaching a carbon price tag to a project is still up for debate. Many companies and cities use carbon accounting to calculate their carbon footprint, but it can end up producing a more optimistic picture than is accurate.

If the city wanted to build a new freeway, it could calculate the emissions that are created by the actual construction of the road, but that wouldn't take into account the full picture of its carbon footprint. Mining materials and making concrete are also responsible for emissions, as is delivering all of it to the construction site.

Plus, if the new freeway causes people to drive more often, those cars will be adding more emissions to the atmosphere. What is included in the calculation can have a big impact on the accuracy of the estimate.

Rai said that the city knows it isn't going to get perfect estimates right away. The science of how to accurately gauge a project's true carbon cost is "still evolving." By using the framework and gaining experience in estimating costs, he said council should get better at capturing the full carbon cost of their decisions as time goes on. 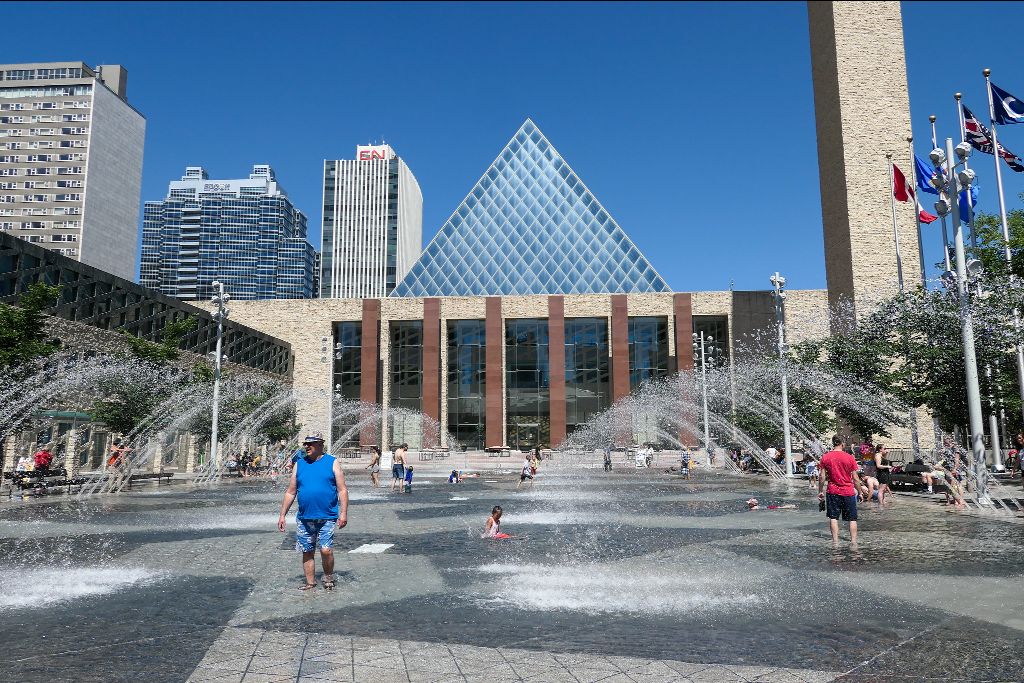 Edmontonians cool off during one of the city's heatwaves during the summer of 2021. (Mack Male/Flickr)

Is carbon accounting a new concept?

Carbon accounting has been used by many companies, countries and other groups to calculate greenhouse gas emissions. When you see statistics like how Canada emitted 730 megatonnes of CO2 in 2019, carbon accounting is how they came up with that number. Countries like Sweden have used carbon accounting to inform their national carbon tax for the past 30 years.

But it's less common for cities to set a budget that defines an absolute future cap on carbon. The idea was first developed in Oslo, Norway in 2016. City officials there called it the "most important management tool" in a plan to become a zero-emission city by 2030. The approach has led to significant reductions in the city's greenhouse gas emissions.

The idea has taken hold in other European countries. But council's decision in April makes Edmonton the first city in Canada, and possibly North America, to set a carbon budget. The concept of a climate accounting framework — where the carbon cost of individual projects will be presented in the same way as the financial cost — is also a fairly new approach.

How effective is carbon accounting in tackling climate change?

It's difficult to say because municipal carbon budgets have only been around for a few years in a handful of places.

But the idea has generated a lot of excitement, because cities account for about 70% of emissions in the world. Many scientists and climate advocates think the carbon budget approach is key to curbing them.

"It's like that old engineering saying 'If you don't measure it, it doesn't matter'," said David Dodge. Dodge is an environmental journalist and co-chair of Edmonton's Energy Transition Climate Resilience Committee, which advised the city on its energy transition plan.

"By putting it in the budget, it matters."

Policymakers can be more strategic in their decisions with the information laid out for them, explained Dodge. The carbon budget also serves as an effective educational tool, revealing the full environmental impact that might otherwise be hidden.

But there are some critics of the carbon budget approach that have highlighted that a budget is only an estimate of the actions required to keep the planet from warming more than 1.5 C.

As well, some scientists worry that the carbon budget concept might hinder action to combat climate change. As long as there is some room in the climate budget, it could imply there is more flexibility than really exists. Policymakers could use that uncertainty to delay action that is desperately needed but is expensive or politically unpopular.

When will city council begin using the budget as part of its decision-making process?

According to the city's proposed timeline, there will be an update to Edmonton's carbon budget this fall as well as projections of different approaches the city could take to curb emissions.

The City of Edmonton uses a multi-year budgeting approach, where it plans out major projects and strategies a couple of years at a time instead of annually. The current budget extends to the end of 2022.

Rai, director of budget planning and development, says the goal is to have the full carbon accounting framework ready by late next year when city council will start discussing the 2023-2026 capital and operating budgets.

Lead photo: In 2019, Edmonton declared a climate emergency and voted that city administration regularly update city council on its progress towards becoming carbon neutral by 2050. (City of Edmonton)

The idea to do a story about carbon accounting emerged from a discussion during one of Taproot's listening sessions on the People's Agenda, our project to ground our municipal election coverage in issues that are important to Edmontonians.