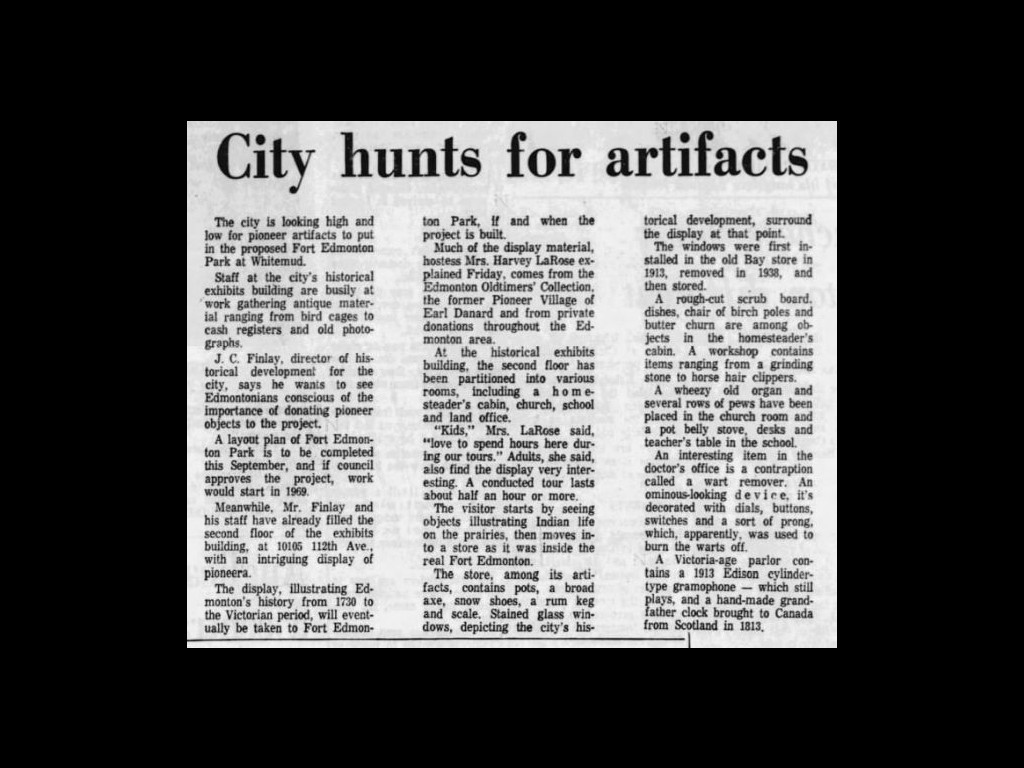 On this day in 1968, the hunt was on for artifacts from early Edmonton for the opening of Fort Edmonton Park.

Fort Edmonton wasn't actually a single location or structure. The Hudson's Bay Company built Edmonton House in 1795, on the north side of the North Saskatchewan River. Over the next half-century, it would be moved almost half a dozen times, often due to flooding. It wasn't until the 1840s that the fort found its final location, just south of where the Alberta legislature now stands.

The fur trade began to decline throughout the latter half of the 1800s, and so did the usefulness of the fort. Hudson's Bay eventually pulled out; the fort served as a warehouse for a time before it was abandoned and left to rot. While there was a push to restore and preserve the structure, it was eventually torn down in 1915.

It would be another 50 years before another serious effort began to restore Fort Edmonton, this time by the Rotary Club of Edmonton. The idea soon gained substantial support, and calls went out to build a collection of artifacts for the new museum. In 1969, construction began on a replica of the fort as it was in 1846, down to the exact measurements. (There was, in fact, one major change: as the original Fort Edmonton was on the north side of North Saskatchewan and the replica was on the south, the layout had to be mirrored to keep the gates pointed towards the river.)

The original master plan for Fort Edmonton Park called for 10 sections showcasing different eras in the city's history. The park opened with a few areas in progress, hoping to add many more. However, the plan proved overly ambitious, and Fort Edmonton Park now has four "streets" representing life in 1846, 1885, 1905, and 1920. Aside from the objects collected, the Fort also houses some actual buildings from the city's history, such as the original McDougall Church and the first home for Alberta's first newspaper.

For much of its existence, the park mainly focused on one specific part of Edmonton's story: the settler side. While Edmonton might have started with the construction of a fort in 1795, the Indigenous history in the region goes back thousands of years. That history, as well as how the arrival of settlers affected the people who were already here, was largely ignored, as were Indigenous contributions to the city's continued development.

A slow shift, both in Fort Edmonton Park and the broader world of historical research, has brought more attention to Indigenous voices and histories. In 2018, as part of a three-year renovation project, the park started construction on its Indigenous Peoples Experience, which was developed in partnership with First Nations and Métis people. The permanent exhibit opened in 2021, featuring documents, artwork, Indigenous interpreters, and the sounds of Cree, Dene, Anishinaabe, Nakota, Blackfoot, and Michif. It has since received accolades.