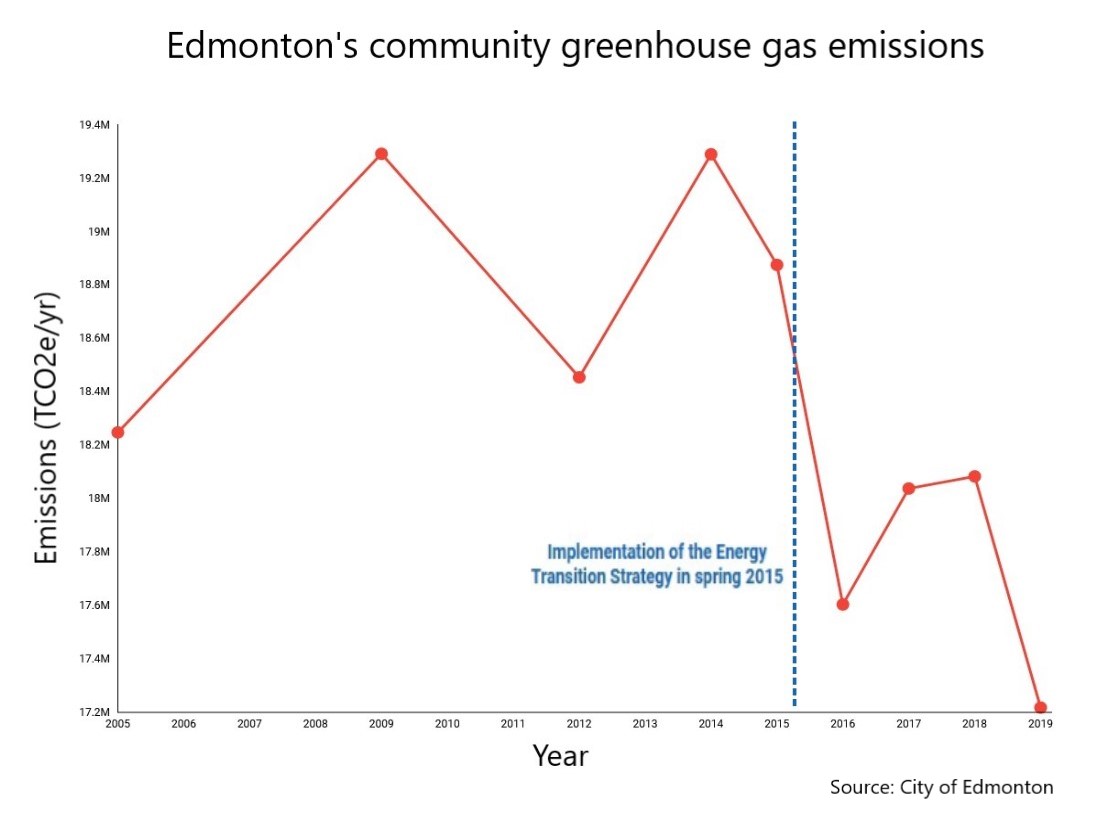 The City of Edmonton wants to align its greenhouse gas emissions with the goal of limiting global warming to 1.5 C outlined by the International Panel on Climate Change (IPCC) in 2018. This would require cutting emissions in half by 2030, relative to 2005.

This chart shows Edmonton's community greenhouse gas emissions per year, using City of Edmonton data. Community emissions include those created by private citizens and businesses: heating and electricity, burning fuel for transportation, and those related to manufacturing and industrial processes. They exclude city operations emissions: fuel for public transportation, heating city-owned buildings, etc. — which account for about 1.8% of the total. The city started collecting yearly data in 2014, which is why some points are missing from earlier years.

Emissions rose considerably between 2005 and 2016, but have gone down in the years since the Energy Transition Strategy was implemented. Change for Climate Edmonton credits more energy efficient building standards in the transition strategy, as well as the provincial government's transition towards less carbon-intensive sources of electricity as the main two reasons for emissions being lower in 2019.

However, though 2019 is the lowest point in the 14-year range, emissions only decreased by 5.6% relative to 2005 while the target is 50% by 2035. A recent report from administration says the city will miss the 1.5 C target if it follows the current trajectory.

This is the main reason city council asked administration to revise the Energy Transition Strategy. The revision was published March 26, and includes a more aggressive expansion of local electricity generation that would rely less on coal and renewable gas and more on geothermal fields and solar power than the provincial grid, quicker development of district energy sharing systems, city planning initiatives encouraging density and mass transit to complement those in the City Plan, and many other tactics.

Council's executive committee will discuss the revised strategy on April 12.