The Backyard, a new outdoor venue located in a vacant lot at 10004 103A Avenue in downtown Edmonton, aims to use the new gathering place to support local businesses.

"The Backyard believes that supporting local is more than a statement," Peter Stetsko, owner and operations manager of The Backyard, said in a news release. "It's a lifestyle."

Using art, lighting, and seating to create a sense of place, the centrepiece of The Backyard is its repurposed sea cans that can operate as a bar, pop-up kiosk, and washrooms. During the pandemic, the patio will be able to accommodate up to 150 people.

"There will be up to two food trucks on-site when The Backyard is open," Stetsko told Taproot. "To name a few, local favourites such as Coast Lunchbox, Sosyal Scoops, Drift, Casa 12 Doce, Smokehouse BBQ, and Laker Coffee will be on-site this summer." 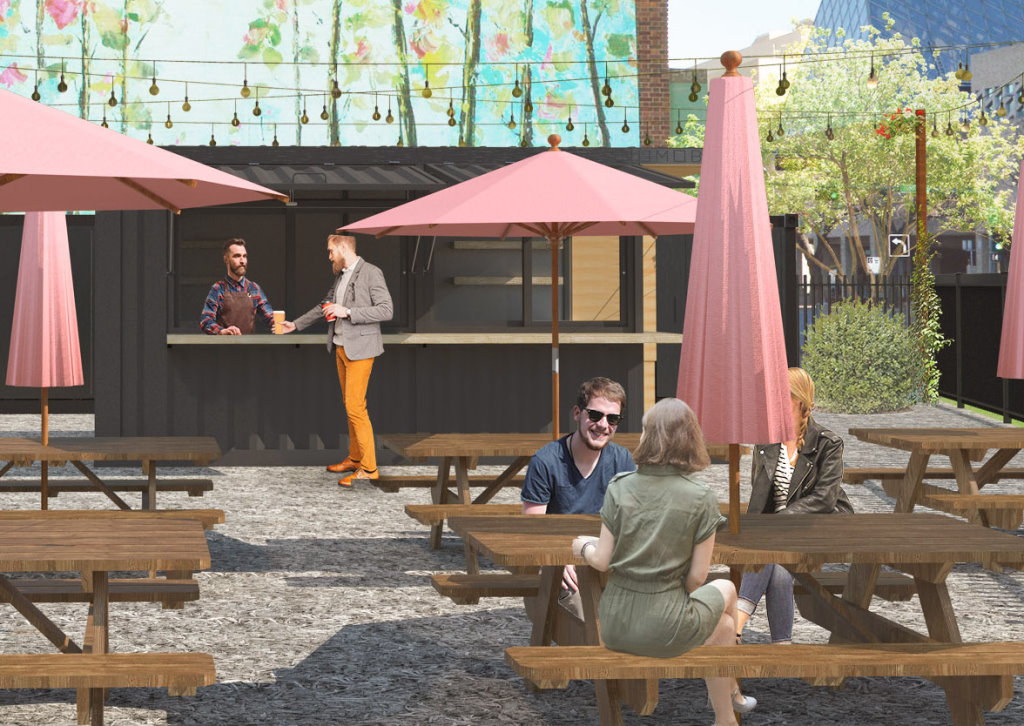 A rendering of the patio space at The Backyard. (Supplied)

The Backyard's food and snack menu, sold out of one of the retrofitted sea cans, also features local purveyors.

"[We've] partnered with Toast Culture and Coast Lunchbox to provide a small roster of salads, sandwiches and wraps, which are only available at The Backyard," said Stetsko. "In addition, we've curated our favourite snack items such as Caramunchies, Zwick's pretzels, and chips and salsa from La Patrona restaurant in Sherwood Park to sell at The Backyard."

Alcoholic beverages will be sourced from Sea Change and Strathcona Spirits, and Stetsko promises a seasonal cocktail program.

While no official opening date has been announced yet, Stestko is hopeful for a late May or early June launch.