The profile of Filipino cuisine has continued to rise in Edmonton over the last several years, thanks to upstart businesses like Filistix, Kanto 98 St., and Yelo'd, as well as with the arrival of Filipino fast-food giant Jollibee in 2019. Now DRTY Ice Cream is adding an additional cultural touchstone for the local Filipino community with its take on sorbetes, or Filipino ice cream.

DRTY (pronounced "dirty") is the brainchild of Abby Ulanimo, who is half-Filipino and was born and raised in Canada. In 2019, she visited the Philippines for the first time and had a reverential initial encounter with a sorbetero (ice cream vendor).

"You can imagine it's plus forty degrees, you're so hot, and you hear this bell and when you turn around this guy has delicious frozen treats," said Ulanimo. "The sorbetero brings those feelings of relief and joy."

Ulanimo explained that sorbetes are typically made with coconut milk or cassava, as ingredients typically found in ice cream like eggs, milk, and cream are expensive in the Philippines. Sorbeteros, lacking access to refrigeration, would make fresh batches of sorbetes by hand daily, sold out of roving wooden carts.

Throughout its development, DRTY has gone through some recipe changes to adapt to the different context. "When we first started, we were using a cassava base," said Ulanimo. "But then we found that cassava flour cannot hold its integrity in the freezer. This wouldn't be a problem in the Philippines because their batches are never frozen overnight." DRTY has since adapted to using plant-based stabilizers in most of its ice cream flavours.

DRTY's name is inspired by the history of sorbetes in the Philippines. Ulanimo shared that when larger corporations began stocking grocery stores with their ice cream, those companies made efforts to brand sorbetes as "dirty" to discourage people from patronizing sorbeteros.

"Our name is such a conversation starter," said Ulanimo. "We are very passionate about highlighting the tradition and the culture behind sorbetes. If I can teach someone something, my job is done." 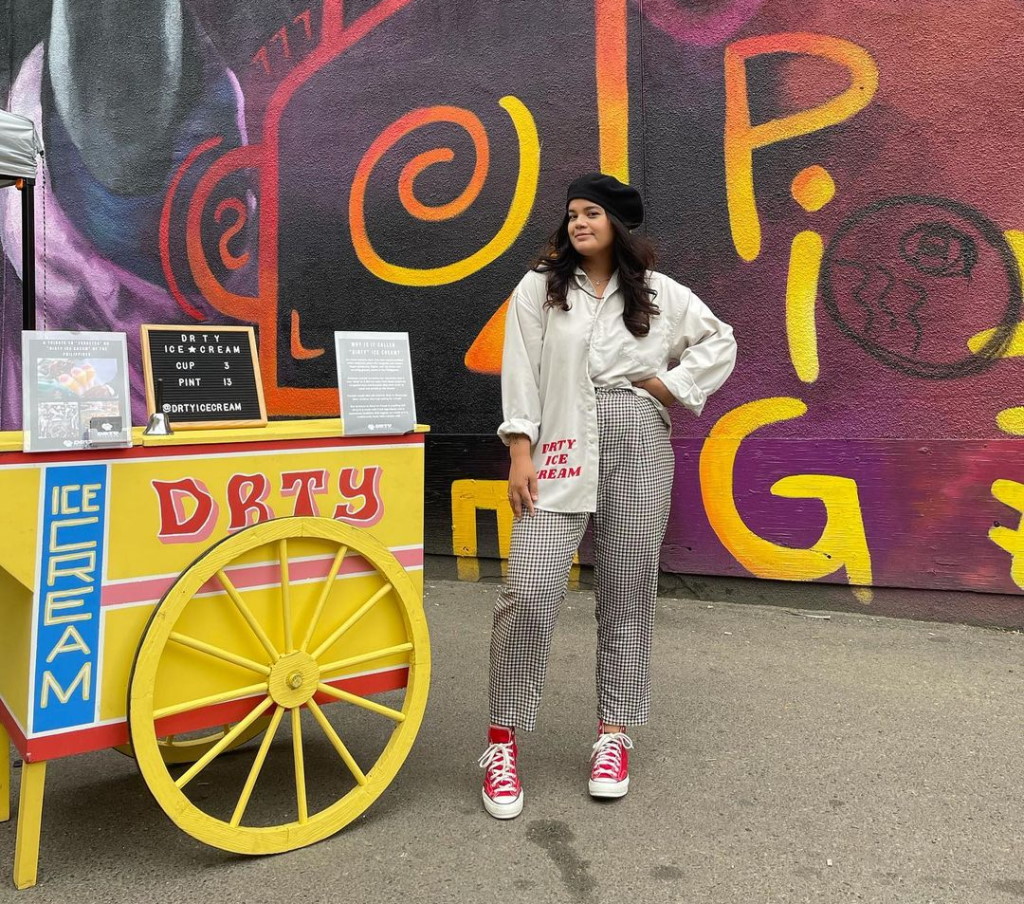 The names of DRTY's flavours are puns in Tagalog (the primary language spoken in the Philippines) to help appeal to the target Filipino demographic. But DRTY also showcases non-traditional sorbetes flavours. The flavour "As In Asin" marries a ubiquitous Fillipino coconut jam with salted caramel. "Mangga Gala" replicates a common cake-like dessert many who grew up in the Philippines would be familiar with.

"Not everyone has electricity or an oven in the Philippines," said Ulanimo. "So if they couldn't afford a cake or couldn't bake a cake they would layer graham crackers, condensed milk, and mangoes, and the graham crackers would absorb the moisture and act like a cake. I want people to taste it and remind them of something they had while they were sitting in their grandmother's lap."

Last year, friends of hers who owned Intent Coffee offered her the chance to make her dreams of creating sorbetes in Edmonton a reality by offering to stock her product. Ulanimo worked as a marketing coordinator by day, and in December 2020 started making ice cream every night in a commercial kitchen until 1am to meet the increasing demand. In June of this year, she finally quit her full-time job and brought on her sister, Emmalyn Ulanimo-Bulan to help.

While Intent Coffee closed earlier this summer, DRTY is available in single-serving cups and pints at the Shoe Shine Shack in the Mercer Warehouse, and Filipino shop 3J Variety Store, as well as at various markets around the city. The company has also found success in supplying customized cups to people throwing birthday parties, bridal showers, or other special events. Long term, Ulamino wants to see a fleet of DRTY carts servicing the city.

"We want to offer that experience of scooping the ice cream and ringing the bell," said Ulamino. "Bringing sorbeteros carts to Canada would just tie the experience together."