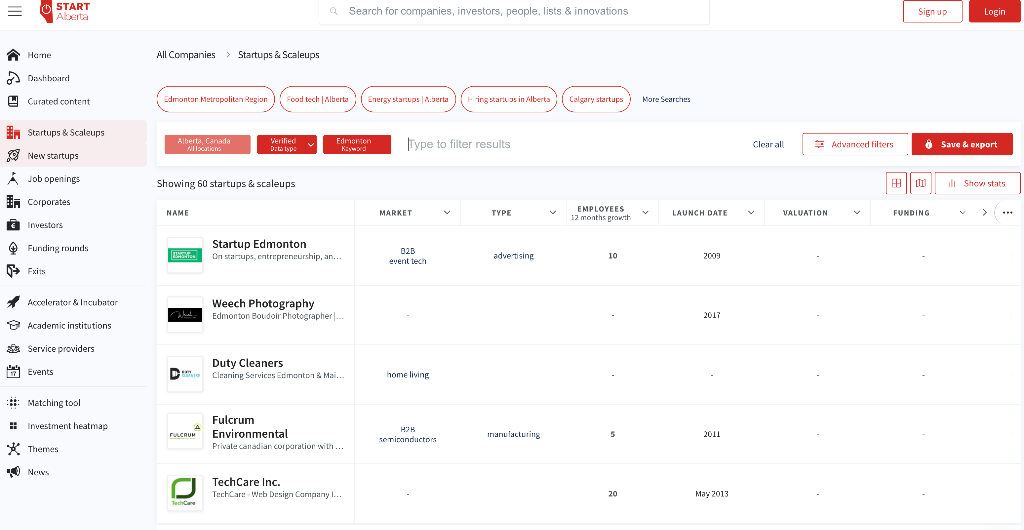 The A100, Alberta Enterprise Corporation (AEC), and the Venture Capital Association of Alberta (VCAA) have launched the Start Alberta Deal Flow Platform, making Alberta the "first location in North America to join a vast network of startup ecosystems" powered by Dealroom.

The open-access database will provide a source of "real-time data for founders, investors, corporate and government stakeholders, cataloguing the collective regional tech ecosystem from funding, work spaces and job listings, to accelerators, spinouts and exits," according to a news release.

Christiana Manzocco, director of industry development for AEC, and interim lead with Start Alberta, said the data from the platform will be included in Dealroom's global database, which will give Alberta companies exposure to investors beyond the province. According to the company, in the first 36 hours post-launch, there were 230 new accounts created and more than 2,600 sessions on the platform.

"It is clear that global investors are interested in what Alberta's tech industry has to offer, and through this tool they will be able to explore it," Manzocco said.

Manzocco explained there are many benefits to startups who join the platform: founders and CEOs can determine their startup's total addressable market, there's a listing of industry events, and it's a source of information about support organizations and what they offer to help startups grow. Investors can also find and track startup progress, raises, employment growth, and more.

Recently, Innovate Edmonton and Urban Living Futures also announced that they are joining forces to work on a database platform and map of Edmonton's innovation ecosystem.

Manzocco said the Start Alberta project will be complementary because "they are both seeking to elevate and showcase Alberta's ecosystem through visualization of startup data." She also explained that the database is unique due to the filters which are available, and the way in which the data can be presented either as a visual map or in report export format. 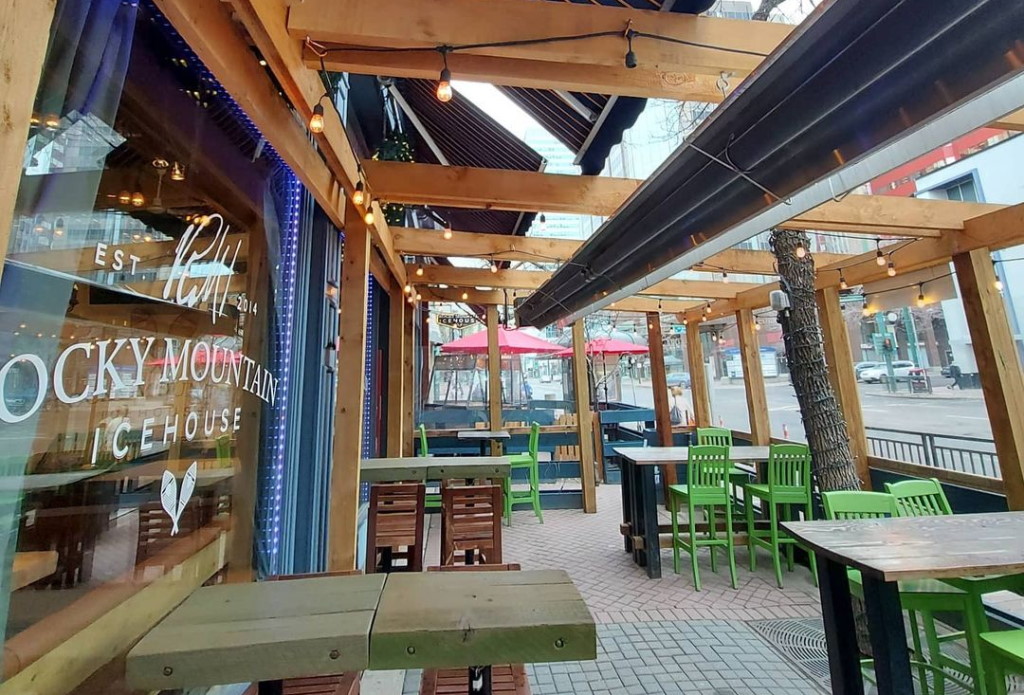 Restaurants and events prepare for Stage 3

Alberta will move forward with Stage 3 of its Open for Summer Plan on July 1 which will see nearly all restrictions lifted, including the general indoor province-wide mask mandate. Edmonton's temporary mandatory face coverings bylaw could remain in effect.

Some restaurants, including Rocky Mountain Ice House and MKT, are scrambling to staff their establishments in order to meet the anticipated demand. Many business owners are finding that candidates are hard to come by, with many choosing to leave the service industry altogether.

Fleisch co-owner Katy Ingraham, spokesperson for the Canadian Restaurant Workers Coalition, isn't surprised that some restaurants are struggling to fill positions due to low wages and the potential for unsafe working conditions.

"Restaurant work is work that needs to be valued and respected with a living wage," she told CBC News. "Frankly, many of them are leaving the industry because they don't see that change happening fast enough, or at all." 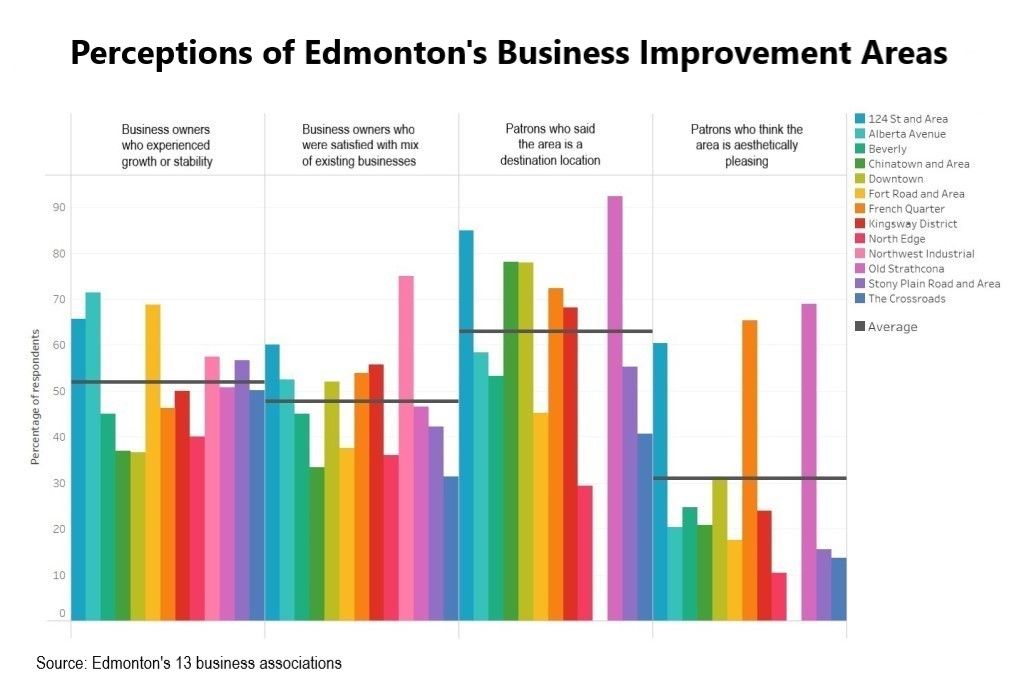 Newly released annual reports highlight the differences in what business owners and patrons think of each of Edmonton's 13 Business Improvement Areas (BIAs).

The 2020 reports were submitted to city council's executive committee on June 14, along with audited financial statements. They show some of the successes and struggles of each BIA, a special geographic area governed by a formal business association to encourage economic development. Alongside commercial vacancy rates, property values, and new business licenses, the reports include survey data that asked business owners and customers what they think of each area.

This chart shows the responses to four survey questions that demonstrate how the different BIAs are percieved.

An average of 52% of business owners said they experienced growth and stability in 2020, while 47.8% said they were satisfied with the existing mix of businesses.

Many of the business associations said they struggled with business retention because of the COVID-19 pandemic. Even Alberta Avenue, which topped the list of businesses reporting growth or stability, saw closures and higher vacancy rates than usual.

Chinatown and Area was near the bottom of the list in most categories. Wen Wang, executive director of the area's business association, said the pandemic forced approximately 20 businesses to permanently shut down.

"Before the pandemic we had 150 businesses in Chinatown ... but now we estimate we have 120 left that survived so far," Wang said. He added that the BIA was struggling to keep businesses before the pandemic, partially due to a lack of visual appeal. Only 20.8% of patrons found the area aesthetically pleasing.

While the opinions of Old Strathcona business owners were close to the average, its patrons thought much more highly of the area than others. Just over 92% said the area was a tourist destination, and 68% said the area looked nice — the highest of any BIA in both accounts (Northwest Industrial did not report data related to patrons).

Cherie Klassen, Old Strathcona Business Association's executive director, credited extended patios and sidewalks as one of the main reasons for the area's success, since it allowed a greater volume of pedestrians to enjoy the area while staying physically distanced.

"Our expanded sidewalk campaign is probably the most successful thing we've done in the last year," Klassen said. "It's kind of fortunate that this crisis gave us the opportunity to try something that we've been advocating for for years."