Silver Skate is a free 10-day festival for the whole family that runs Feb. 11-21, 2022. You can help support the festival and 35 Edmonton area small businesses by purchasing a Celebrate Edmonton Bag. These "surprise" bags are filled with local culinary delights and handcrafted items made in the Edmonton area. The bags are available in $25, $50, $100, and $150 denominations, and delivery is available. The order deadline is Dec. 12.

We're thrilled to offer Pulse readers the chance to win one Celebrate Edmonton Bag for free! All you need to do is let us know what you value about the Pulse using this online form. Fill it out by noon on Friday, Dec. 10 to be entered. Open to residents of the Edmonton region. We'll draw one lucky winner at random. Good luck! 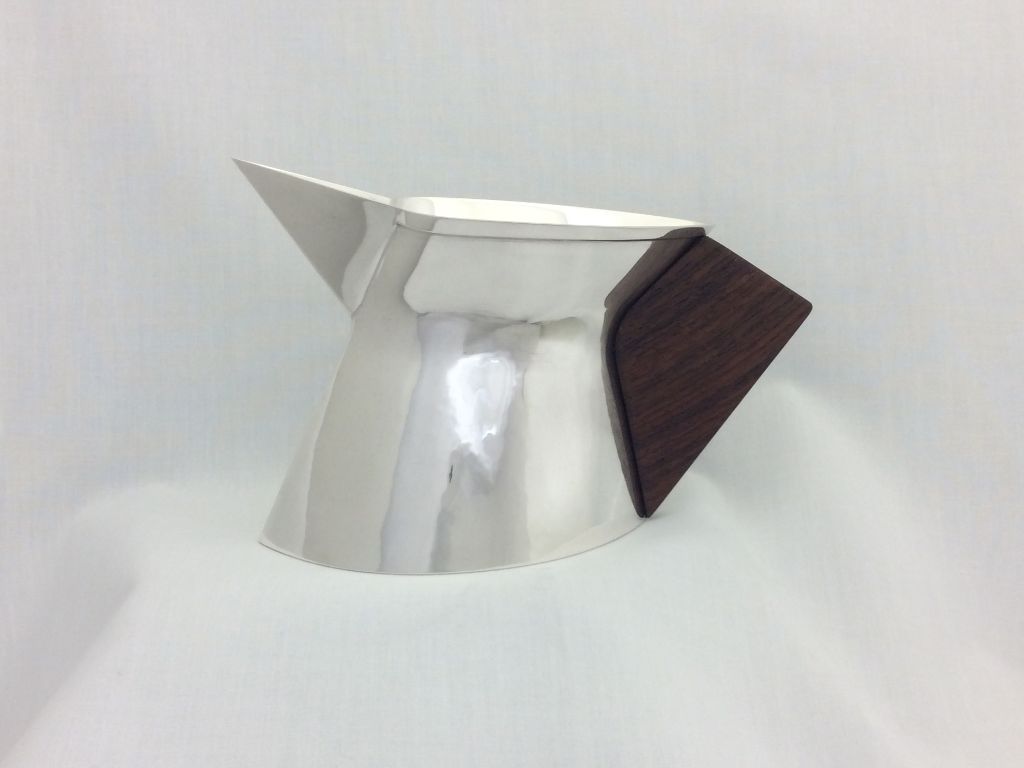 The Edmonton exhibition was initially meant to be a small sampling of Cantine's current work, celebrating that she is still working at 80. But as the show came together, it evolved into a retrospective of her career — including the first drinking vessel she made by hammering out a flat disc in a process called raising, and an early pin she designed with her father as a gift for her mother.

The show also features a variety of new work, including copper wall sculptures and jewelry.

Cantine was initially drawn to metalsmithing as a 12-year-old growing up in Lincoln, Massachusetts, when she started taking classes to learn the craft.

"It was the novelty of it, and once I started working with metal and learning how to saw it and file it and shape it and hammer ... you can change its contours so beautifully," Cantine explained. "(Sterling silver) is such a cooperative metal. It was so much fun to learn that this metal that looks permanent, solid, and hard, was cooperative when you tell it what to do."

Cantine also works with copper and other non-ferrous metals. 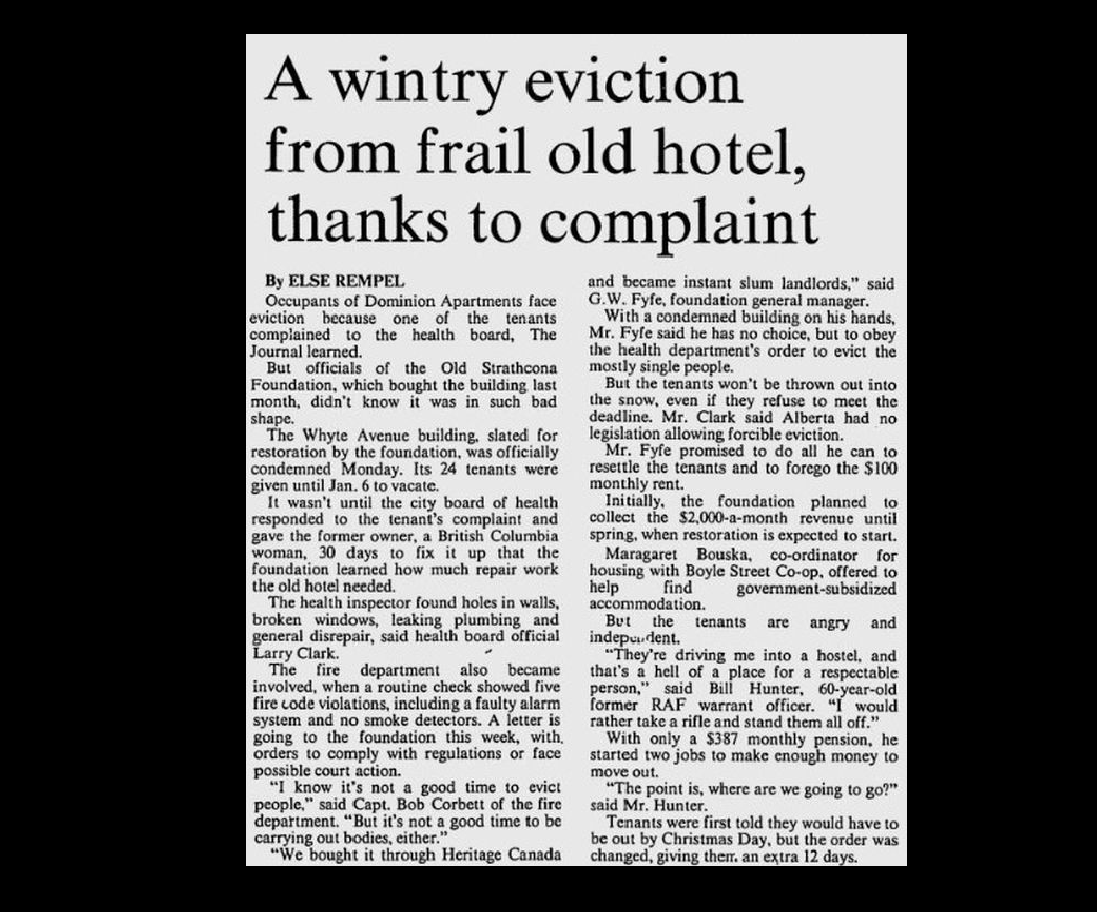 On this day in 1980, people living in the Dominion Apartments were facing eviction after the historic building was condemned following health and fire code violations.

"We bought it ... and became instant slumlords," the general manager of the Old Strathcona Foundation told the Edmonton Journal. The foundation had bought the building a month before, intending to restore the structure. It claimed that it knew the building was in rough shape but was unaware of the extent of the damage, including holes in the walls, leaking pipes, and broken windows.

It was a rotten situation for the occupants, and a sad fate for the ornate building, one of the first hotels in Strathcona when Robert McKernan built it in 1903. The fairly standard three-storey structure was adorned with wooden balconies and a Victorian-inspired cupola, giving it an instantly recognizable shape among the other buildings along Whyte Avenue. (Creating Whyte Ave. landmarks was a bit of a family business for the McKernan clan — son John would later design and build the Princess Theatre.)

The upper floors housed guests visiting Strathcona, while the ground floor contained dining and a popular beer parlour. That tavern was seemingly a big part of the Dominion's success; Prohibition came into effect in Alberta in 1916, and the Dominion ceased operating as a hotel shortly afterwards. The upper floors were converted into apartments, while the lower floor housed retail stores.

The Dominion, along with much of Whyte Avenue, survived the "knock-it-down" approach that laid waste to many of the city's older buildings during the post-WWII boom years. But while it still stood, decades of neglect and lack of maintenance had taken their toll. By 1980, it was little more than the "frail old hotel" described in that Journal article.

However, that was not the end for the Dominion. The Old Strathcona Foundation went ahead with the extensive renovations it had planned. Much of the building was completely rebuilt, with much of the original brick façade and wooden balconies saved.

The building has undergone another transformation in recent years. The interior was updated for modern office and retail space, and a solar panel skylight was added. The façade remains the same, harkening back to a time of elegance and prosperity — a contrast to now as many retail stores along the strip seek support during a slow post-pandemic recovery. 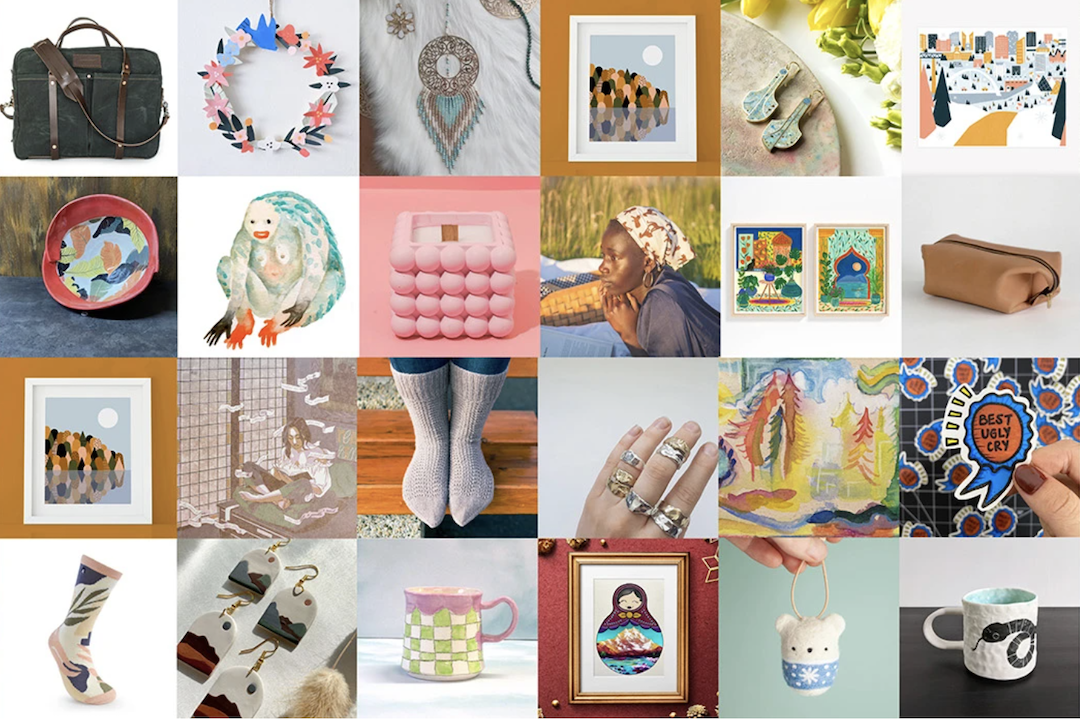