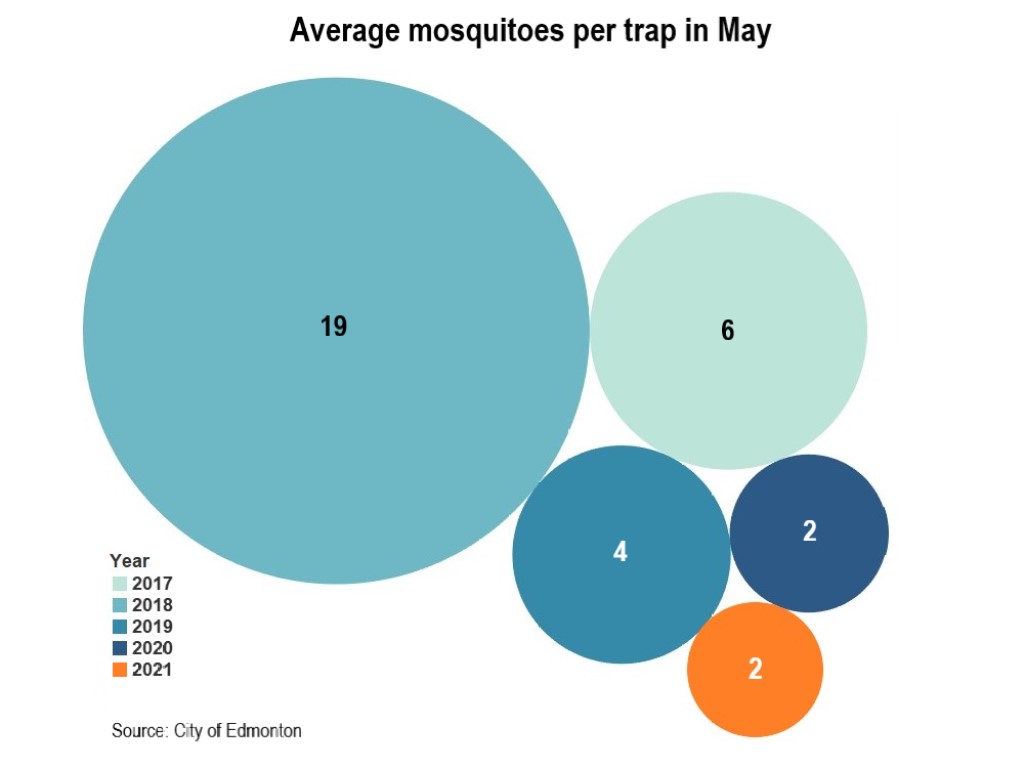 Edmonton experienced lower mosquito activity than it has in the past five years this spring.

This chart shows the average number of mosquitoes that have been found in the city's light traps in May since 2016, using City of Edmonton data that records the traps each week from May to October. Although Edmonton is home to more than 30 species of mosquitoes, this data only records "nuisance mosquitoes" - ones that typically bite humans.

A description of the data set said that the traps do not give a perfect idea of the number of mosquitoes in the city, since the trap counts can be confounded by factors like wind, and the city sometimes experiences trap failures or changes their locations from year to year. However, the trap counts provide a good overall picture of the variations in mosquito activity.

The City of Edmonton anticipated the low counts, because of conditions earlier in the year.

"We are coming out of a very dry winter," Mike Jenkins, the city's pest management coordinator, told Global News in April. "Our spring so far has been very dry and at times cool."

Weather data measured at the Edmonton Blatchford station showed that, in March and April, Edmonton received less than one quarter of the average precipitation for those months.

Last fall, city council voted to terminate an aerial program that used helicopters to spray areas on the outskirts of the city. However, reports that this could result in mosquito populations increasing by 40% prompted council to reinstate the program on May 3 for the 2021 season.

In contrast to the low activity over the past two years, May 2018 had the second highest on record, due to high levels of moisture. The city recorded more than 10 times the number of mosquitoes per trap than this year. To make matters worse, the high activity included an outbreak of a particularly aggressive species.

Luckily, Edmonton is not likely to see swarms of these active mosquitoes this year, even if overall mosquito activity picks up later in the summer, since the species tends to only show up in spring.