The Edmonton Metropolitan Region Board (EMRB) is considering changes to the region's transportation network to address economic growth, climate change, and travel between municipalities.

On June 10, the EMRB voted unanimously to pass the Integrated Regional Transportation Master Plan (IRTMP), which will serve as its guiding document for transportation-related policies and investments. The plan has four desired outcomes: reducing environmental impacts, healthy communities, economic competitiveness, and to account for the different needs and challenges faced by the region's diverse municipalities.

"We've looked at this with a holistic approach," Gale Katchur, Fort Saskatchewan mayor and chair of the task force that designed the plan, told Taproot.

Although the exact policies that will stem from the IRTMP will be decided at later dates by each individual municipality, the document includes suggestions for how to achieve its goals. One of the biggest suggestions is encouraging a shift away from cars towards more sustainable forms of transportation.

"We don't just want to be building new roads. We want to get people out of private automobiles, and into transit or onto trails," Katchur said. 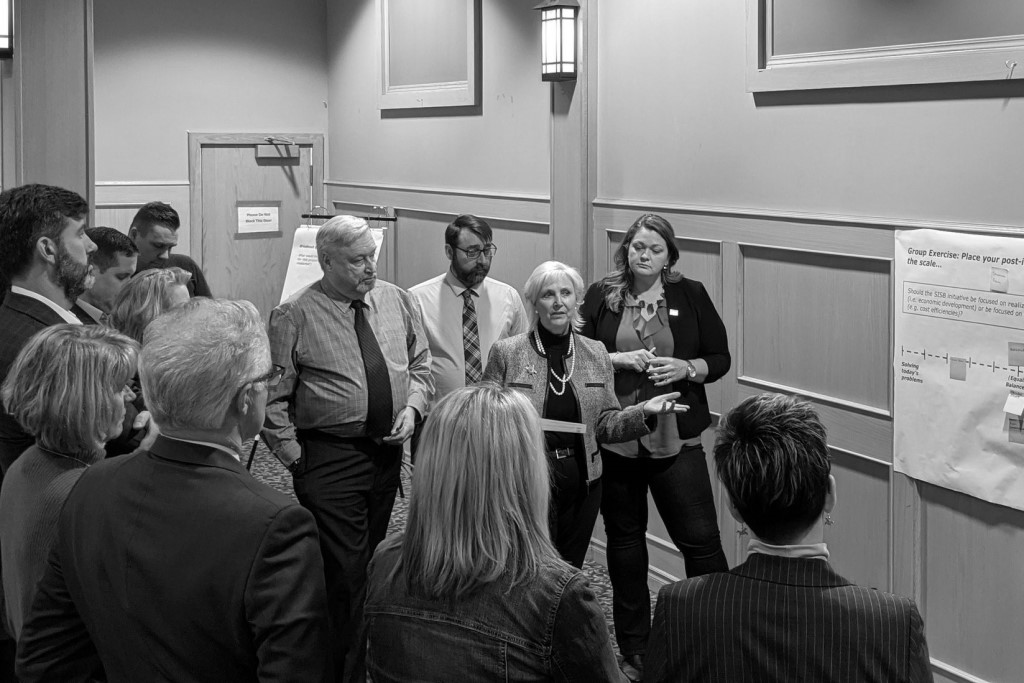 An EMRB task force meeting in February 2020, the most recent available photo due to the COVID-19 pandemic. The board is made up of mayors and officials from 13 Edmonton-area municipalities. (Courtesy of EMRB)

Craig Lametti, a partner at urban planning consulting firm Urban Strategies, helped develop the plan and pointed out that the design of mass transit systems should be left to the Edmonton Metropolitan Transit Services Commission, which was set up in January to integrate the bus and LRT networks of eight Edmonton-area municipalities.

"We wanted to make sure we weren't overlapping with the operational planning they need to do," Lametti said. "We focused our plans on where infrastructure will be required to support that."

To support economic growth, the IRTMB suggests better integrating the region's supply chains for commercial and industrial goods. Katchur said this aspect is crucial from her perspective as Fort Saskatchewan's mayor, since the city borders one of the largest industrial areas in Western Canada.

"It's critically important to Fort Saskatchewan and to Alberta's Industrial Heartland that we have efficient movement of goods, when you look at the number of trucks," she said.

The plan was heavily informed by the EMRB's 2017 Growth Plan, which guides the region's land-use policies to account for population and economic growth 30 years into the future. Members of the EMRB said one of the primary benefits of the IRTMP is that it incorporates elements of the growth plan like housing diversity, and encouraging urban density.

"Integrating land-use and transportation planning is going to be key to our region's future as both a prosperous and connected community," said Beaumont Mayor John Stewart.

For example, the IRTMP suggests the region's urban municipalities plan "corridors that are well served by public transit and active transportation facilities," to encourage density by concentrating residential and commercial development in relatively small areas.

These intermodal hubs, combined with the plan's suggestions to designate lanes specifically for buses and industrial traffic where appropriate, would also help reduce traffic congestion, the document said.

Edmonton Mayor Don Iveson supported the plan's aim to reduce congestion and encourage environmentally friendly methods of transportation, saying that coordination is needed to address the effects climate change will have on the region.

"(The City of Edmonton) won't be able to achieve any of those climate objectives we're talking about without taking precisely this kind of approach," Iveson said, referring to emissions reductions targets approved by city council in April.

Katchur agreed that sustainability is central to the IRTMP because the idea is to plan for the region's future, which will include changes to the environment.

"It's going to be a legacy document, that I believe everybody will embrace," she said.